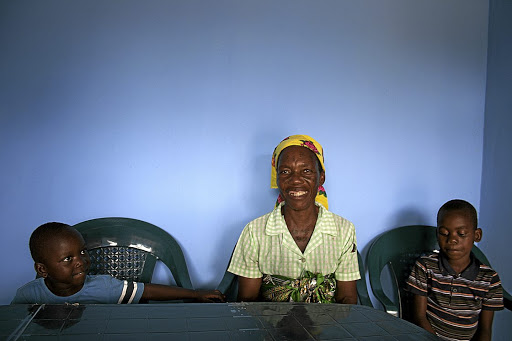 Sara Machava, the mother of Emmanuel Sithole who was murdered in Alexandra on April 18 2015, in the new brick house built in Nhachunga village in Mozambique's Sofala province with funds raised by the Sunday Times. With her are her grandsons, Sithole's sons Jeremia, 5, and Jossia, 7.
Image: Annica Marincowitz

It took three years, but the mother of murdered Mozambican vendor Emmanuel Sithole received the keys two weeks ago to a three-room house built with donations received from Sunday Times readers and other members of the public.

Dona Sara, as she is known, sat on a new plastic chair in the living room of her new house in Mozambique and thanked the people of South Africa "for their love".

Her two young grandsons, Jeremia, 5, and Jossia, 7, listened to the grown-ups talking, their small faces serious. This week was the third anniversary of their father's death. He was killed in a xenophobic attack that horrified the world.

The bright blue house is a gesture from the country where their father died and an attempt at giving them a chance at a better future. It also brought some closure in the wake of a murder that shocked and shamed South Africans. 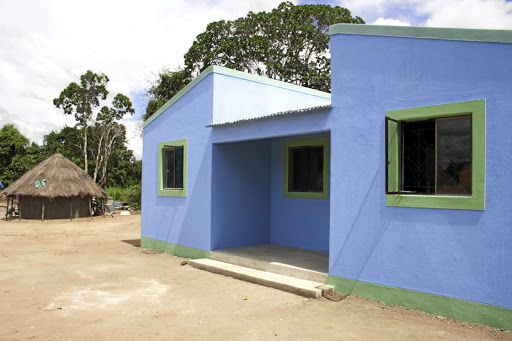 The three-room house was built for Emmanuel Sithole's family, left behind when he was killed in a xenophobic attack in South Africa.
Image: Annica Marincowitz

Two men were convicted of the murder. Sithole was bludgeoned and stabbed on Saturday April 18 2015 in Alexandra township in Johannesburg, in full view of several onlookers. In 2016 Sifundo Mzimela and Mthinta Bhengu were sentenced to 17 and 10 years, respectively.

On the day of the attack, Sunday Times photographer James Oatway caught the unfolding events on camera. Images of the 35-year-old street vendor being stabbed and lying among rubbish in the street were carried on the front page of the newspaper.

An outpouring of grief and compassion for the family followed. Sunday Times readers and members of the public from as far away as the UK felt compelled to do something tangible to express their anguish. 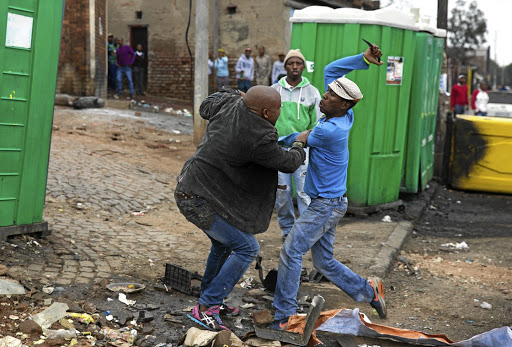 Two men were convicted of the murder of Emmanuel Sithole on April 18 2015 in Alexandra. Picture: James Oatway

So many readers wanted to donate money that the Sunday Times established a fund later that month to collect donations, and eventually raised R112,435.30.

Putting the funds to use in a way that would be of maximum benefit to Sithole's mother, his two widows and three very young children proved more challenging than expected. Machava said she wanted a house in which to raise her grandchildren. It had been her son's dream to build his family a brick house to replace their traditional mud home.

The complicated logistics were exacerbated by distance. The family live in a rural area near the small village of Nhachunga in the Chibabava district of Mozambique's Sofala province. Their home is a six-hour drive from Beira, some of it on poor dirt roads. Rebel fighting in the surrounding Muxungue area made travel unsafe and stalled the project for a year.

At the end of 2015 the Sunday Times was able to deliver a bicycle and water tank to the family, and later a water purifier, solar panel and four goats.

A long search for the right people to oversee the building project followed, but eventually they were found: Heike Friedhoff, a German activist working for women's rights in Mozambique, and the Rev Jacob Jenhuro of the United Methodist Church. They are both involved with Oram (the Rural Association for Mutual Aid), a Maputo-based organisation engaged in working for sustainable development in Mozambique.

Friedhoff advanced about R50,000 of her own money for building materials and Jenhuro made the trip between Beira and the family compound to transport cement and bricks "more times than he could remember".

The murder of Emmanuel Sithole during the anti-immigration violence in Alexandria township caused outrage across the South Africa. Sunday Times, who captured photographs of the attack, raised mone...

Machava said the house made her happy and would change her life. Its shiny new corrugated iron roof will keep the family dry during the rainy season and save her a lot of labour. To thatch a traditional mud home requires four weeks to cut grass, another week to carry it home, and three days to thatch.

She said she "does not have the words to say thank you to South Africans". 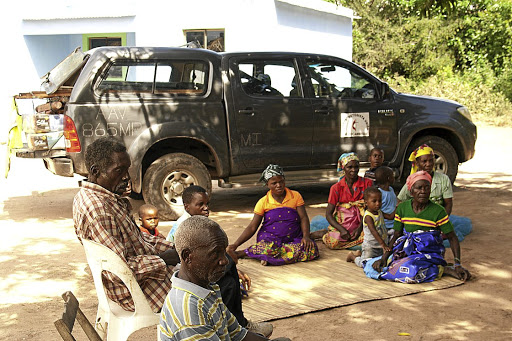 Friends and community members gather to celebrate with Sara Machava and her family before the keys to her new brick house were handed to her.
Image: Annica Marincowitz

She asked Sunday Times readers to hold the children in their hearts and "keep praying for them". The youngsters know their father died, but they do not know how he was murdered. They will learn when they are older, because "it is very hard to speak about this", she said.

Asked how she felt about the publication of the photographs of the attack on her son, Machava said that it was "because of love that you published the photographs". Without that, "the world would not have known about what happened to Emmanuel".

Her son would bring home groceries at Christmas, and send money and clothes for the family. Now Machava and her grandchildren live on the food she grows for them: maize, beans, cassava and black-eyed peas.

The life of a subsistence farmer is hard and precarious, but unlocking the door of the new blue house brought a smile of happiness to her face.

Emmanuel Sithole: Chronicle of a killing in cold blood

His pictures of the gruesome murder of Mozambican Emmanuel Sithole in Alexandra this year won him a major award. But as photographer James Oatway ...
Opinion & Analysis
6 years ago

17 and 10 years in jail for Emmanuel Sithole's murderers

The two men convicted of murdering Mozambican hawker Emmanuel Josias Sithole have been sentenced‚ one to 17 years and the other to 10 years behind ...
News
6 years ago

The Hate Crimes Working Group (HCWG) has called on government to fast track passing the Prevention and Combating of Hate Crimes and Hate Speech bill ...
News
4 years ago