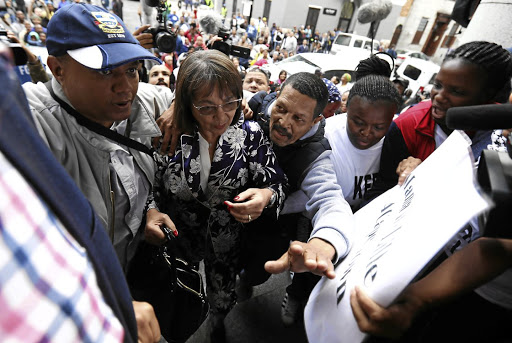 Ousted Cape Town mayor Patricia de Lille wants a diplomatic posting to the US in return for joining the ANC.

The ANC has made overtures to De Lille in the hope that once her relationship with the DA is terminated for good, she can help the party win back lost support in Western Cape coloured communities where she is hugely popular.

The Sunday Times understands these informal approaches began in February and are being handled from Luthuli House, led by the elections team.

It is understood that during discussions with De Lille she had indicated her preference for a diplomatic posting to the US once her battles with the DA were over.

Q&A with the DA's James Selfe

The war between Cape Town mayor Patricia de Lille and the DA, which has expelled her from the party, continues. Chris Barron asked the chairman of ...
Opinion & Analysis
3 years ago

A senior ANC leader, who asked not to be named, confirmed that informal talks were taking place. "Yes, there have been those talks on the sidelines, but of course this cannot be made public for obvious reasons," said the leader.

ANC elections head Fikile Mbalula told the Sunday Times there could be individuals who might have made an approach but there had been no formal talks.

"I can't deny the fact that there could be talks, in the fluid political environment we are in, with Patricia and individuals in the ANC. But saying there are formal talks with her is an exaggeration," he said.

"The ANC is open, but in this particular instance we are not in formal talks to woo her to the ANC."

Eyebrows were raised in February when President Cyril Ramaphosa, as leader of the ANC, was hosted in the mayoral suite at the Cape Town city hall when he launched the Nelson Mandela centenary celebrations.

The two also exchanged pleasantries when they bumped into each other at the Cape Town International Jazz Festival in March.

An ANC official in the Western Cape said party structures, especially on the Cape Flats, were strongly in favour of wooing De Lille to the ANC in the hope that her popularity and charisma would boost the party's support.

The ANC has been on a sharp decline in the province and there is a danger that its support could fall below 20% in next year's elections. It has roped in former premier Ebrahim Rasool to help arrest the decline, and there is a broad view that if he is paired with De Lille they could make a strong impact.

There is no denying that the coming general elections will be the most exciting and toughest since the first democratic elections in 1994.
Opinion & Analysis
3 years ago

"Branches are telling us to meet with her, they are saying she could help drum up support, especially in the coloured areas. People are saying she ideologically belongs in the ANC," said the official, who asked not to be named.

De Lille did not respond to a request for comment on these issues despite repeated calls and text messages. ANC Western Cape provincial secretary Faiez Jacobs said he was not aware of the talks with De Lille.

De Lille, who is fighting to retain her DA membership and council seat, scored a minor victory on Friday when the High Court in Cape Town ordered that the Independent Electoral Commission should not fill her position as a city councillor. The DA terminated her party membership on Tuesday, which means she automatically loses her seat in the council.

Meanwhile, DA leader Mmusi Maimane has denied a claim by De Lille that he recently renewed the party's offer of a seat in parliament for De Lille in exchange for her stepping down as mayor.

De Lille rejected the first offer of an MP's job late last year, and Maimane said it had not been repeated. "Once the ship for that had sailed, how do I convince people in parliament? She rejected it the first time and said she doesn't want to go to parliament for whatever reasons."

Maimane claimed De Lille was "always intent" on resigning and that their negotiations, which began late last year, were about the best way to exit.

"But she started to negotiate in bad faith and therefore as a result of that, she simply wanted to extort things out of the party, that the party couldn't do," he said. Maimane would not go into detail on the alleged demands.

Mouthwatering prospect of a new Zille or Leon party

Generally, political parties aren't required to be as united as they always claim to be. The splits in the ANC are, by now, world famous.
Opinion & Analysis
3 years ago

The DA attacks people like Mugabe, Gaddafi and Chávez, never Bush, May or Trump, and it needs to liberalise itself before it will attract black voters
Opinion & Analysis
3 years ago