'Bibi' Cenenda arrest 'will end it all', say cops as hunt narrows 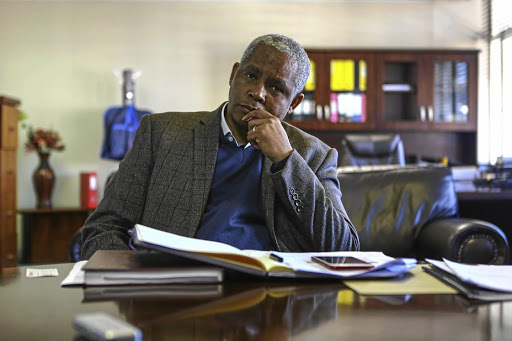 The Hawks have named their No 1 target as they close in on gangs believed to be behind at least 23 cash heists.

Wellington "Bibi" Cenenda, 38, is believed to be the mastermind behind the spate of heists in Gauteng and surrounding provinces, and in the past 10 days officers have arrested six of his alleged key lieutenants.

"We catch [Cenenda] and we end it all," Gauteng Hawks boss Major-General Prince Mokotedi told the Sunday Times this week. "He is the key to these heists in the old Transvaal [Gauteng, North West, Limpopo and Mpumalanga]."

Since national police commissioner General Khehla Sitole announced the formation of a specialised task team, which was created in February, police have been trying to catch Cenenda and his gang.

He has narrowly escaped raids on his hideout in Tembisa, Gauteng, and a safe house in Tzaneen, Limpopo.

"But we will catch him. We have virtually neutered his Pretoria gang. Now we are crippling his Johannesburg gang," said Mokotedi.

Kalyani Pillay, CEO of the South African Banking Risk Information Centre, said since January there had been 178 heists - just short of one a day - with 17 people killed and 93 injured. For the same period in 2017, there were just over 140 heists.

Cenenda's gang is allegedly behind the double cash-van bombing in Boksburg on May 17 and at least 22 other heists, which the Hawks claim have netted the gang R46-million.

Thanks to cyberforensics and tracking expertise, six alleged gang leaders have been arrested, including a suspected former military marksman from Zimbabwe. The latest arrest, in Benoni on Wednesday, snared Cenenda's bodyguard, Jabulani "Boy-Boy" Dodo. The six men are wanted for murder, armed robbery and hijacking. One is linked to 22 crimes apart from 10 heists.

For months, the team tracking Cenenda's gang have worked out of a tiny room in downtown Johannesburg. Backed by crime intelligence agents, cybercrime experts, forensic analysts and detectives, they have gathered cellphone records, bank statements, title deeds and data on vehicles and firearms.

Ten days ago, with support from the SAPS special task force and national intervention unit, they arrested 23 suspects, including a Tshwane metro policewoman and a 67-year-old grandmother.

Police arrest 23, including metro cop and her boyfriend, for cash heists

Police have claimed a massive breakthrough in cash-in-transit heists, smashing a syndicate and arresting 23 people, including a Tshwane Metro ...
News
3 years ago

The cop is the second Tshwane municipal policewoman to be arrested. The three women - girlfriends or relatives of the suspects - allegedly hid and ferried guns and the gangs of robbers to and from heist scenes.

Mokotedi said the alleged kingpins of Cenenda's two gangs, which focused on Pretoria and Johannesburg, had been arrested. "We have the who's who of masterminds here," he said of men including Sello "The Teacher" Senyatsi, Thato "The Bomber" Gaopatwe, Tauyaborwa "Spikiri" Machika, Collen "Jabu" Mmamadi, Calvin "Boze" Molete, Paul "The Patriarch" Sibande, and Stanford "Madam" Dihangoane.

Mokotedi said: "For months we have been gathering data. It's been a massive task, especially in identifying the foreigners involved such as those from Botswana [Gaopatwe and Molete], who are the explosives experts, and the Zimbabwean [Sibande], who we believe is a former military marksman.

"These guys are next-generation. They are professional, coming together just days before a job and then vanishing after the attacks, crossing borders. They know about cellphone tracing. One guy used 50 different sim cards and 20 cellphones."

Tracking the suspects included looking for hundreds of prisoners and suspects who had recently been paroled or given bail, or whose cases had been withdrawn.

From 400 names, police zeroed in on 153 suspects, and the breakthrough came while investigating a heist in Eersterust, Pretoria, in December. Mokotedi said: "We saw similarities with the modus operandi of four other heists in Pretoria. We relooked at these cases, re-examining all the evidence. We started drawing links through technology and intelligence between suspects and realised we had some of the gang's core members. From 153 people we went down to 12, and from that to five."

By activating dormant arrest warrants, Mokotedi said, they began rounding up suspects. "But we were still battling. We didn't have all their identities. In some cases we only had nicknames. One of our big breaks came when we were tipped off on the location of eight of their safe houses in Gauteng. They had nowhere to hide."

We knew if we got 'Madam', we would get the other big players. That's exactly what happened on Thursday night, when we arrested him first in Soshanguve

Mokotedi said between March and June they received information on the location of Cenenda's main lieutenants, including "Madam". "We knew if we got 'Madam', we would get the other big players. That's exactly what happened on Thursday night, when we arrested him first in Soshanguve. They went down like dominoes."

The remaining challenge is to organise the data. "This investigation will take nearly two years to complete. We are looking to work with the CSIR [Council for Scientific and Industrial Research] to help analyse it to ensure we have a watertight case."

The cash-transport industry welcomed the arrests. "What's happened with the arrests over the past couple of months and weeks is brilliant. It's exactly what we need," said Fidelity CEO Wahl Bartmann.

But he fears the syndicates will move elsewhere. "This week one of our vans was bombed in Tugela in KwaZulu-Natal," he said. "We have not had many of our vehicles attacked in that province.

"We are worried that these latest arrests will simply displace these suspects. We just hope that the police in other provinces are prepared."

Bartmann said the industry was working with the police. "That's paying dividends, with the attempted attacks on vehicles coming down."

G4S Cash Solutions MD Keith Alberts hailed the arrests as "a victory in the attack against our industry", adding: "The perpetrators of cash-in-transit crime are organised and are using increasingly violent methods to circumvent the security measures put in place."

Cash-in-transit heists have declined by 61% in a month since the launch of a nationwide police operation.
News
3 years ago

Before sunrise on a rainy morning, a security officer on his way to work spots a sinister convoy, and follows it. So begins another day of violence ...
Opinion & Analysis
3 years ago