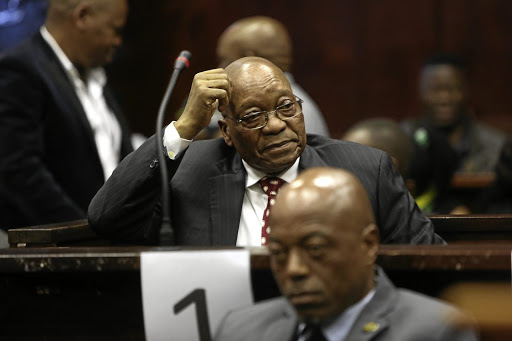 Jacob Zuma will be back in court this week, this time with a legal 'dream team' that includes four senior advocates. No one, however, will say who is footing the former president's legal bill.
Image: Jackie Clausen

Former president Jacob Zuma will have a new legal "dream team" when he returns to court on corruption charges this week. On the slate are two lawyers who are also representing the Gupta family - but none of them will say who is footing the bill.

Four senior advocates and one junior counsel - estimated to cost anywhere between R160,000 and R290,000 a day - will walk into the High Court in Pietermaritzburg alongside the former president on Friday. As a guide to the costs likely to be incurred, two years ago it was reported that advocate Jeremy Gauntlett SC was being paid about R50,000 a day to help Zuma extricate himself from the Nkandla scandal.

The cost is likely to escalate into the millions when Zuma goes to trial in November.

Presidency spokeswoman Khusela Diko said President Cyril Ramaphosa's office had agreed to pay for only one senior advocate and two junior counsel, pending the outcome of a court challenge by the EFF and DA to block Zuma's legal funding by the state.

"The Presidency has approved a legal team of the same size as that which the former president previously had, being one senior and two junior counsel. We have made no further commitments," Diko said.

No jet, no booing, so Jacob Zuma snubs Barack Obama for Mvezo

Jacob Zuma skipped the official celebrations of Nelson Mandela's centenary because he no longer has access to a private jet.
News
4 years ago

"The Presidency will honour only the commitment made to the payment of expenses related to a team of the size we've agreed to. We have no commitment beyond this and [are] thus not liable. Besides, we would not be in a position to legally justify such costs."

Despite the lack of state funding for his new legal team, Zuma will be represented by some of South Africa's most prominent advocates:

Hellens confirmed the names of the legal team, and said they would all be in court on Friday. He declined to comment on how the team was being funded, referring questions to Zuma's new attorney Daniel Mantsha.

"I've simply been briefed," he said. "I'm really not in a position to comment on that."

Zuma missed a June 18 deadline to respond to the EFF and DA cases, and to explain to the High Court in Pretoria why he was entitled to funding for his corruption trial defence. His attorney, Daniel Mantsha, has yet to indicate when the former president will file his response, or why he hasn't.

Zuma faces 16 charges that include fraud, corruption and racketeering. These charges relate to Zuma's allegedly corrupt relationship with Schabir Shaik, who was convicted for facilitating a R500,000-a-year bribe for Zuma from Thales. The bribe would be given in exchange for Zuma's protection from an investigation into the arms deal.

He is also fighting to overturn a court order that he personally pay an estimated R10-million in legal costs linked to failed bids to challenge the release and findings of former public protector Thuli Madonsela's State of Capture report. He has told the high court the order "poses a significant financial burden on me personally".

Earlier this month Zuma fired his longtime attorney Michael Hulley and replaced him with Mantsha, a former Denel board chairman and known Gupta associate.

Mantsha has also been implicated in allegations of state capture. Leaked e-mails in 2017 disclosed what appeared to be damaging correspondence between Mantsha and the Gupta family about the establishment of Denel Asia, a joint venture between the group and associates of the Guptas.

Other damning e-mails show Mantsha sending the Gupta family his personal bills. It is not known if they were paid.

Sikhakhane SC and Masuku did not respond to requests for comment, while Joubert referred questions to Hellens.

Gupta family attorney Rudi Krause, who briefed Hellens to act for Duduzane in his culpable homicide case and Joubert to represent him in his corruption trial, declined to comment on whether the family was paying Zuma's legal bills.

"I cannot comment on the issue," he said, referring questions to Mantsha. Mantsha did not respond to requests for comment.

Zuma's spokesman, Vukile Mathabela, did not respond to queries about whether the Guptas were funding the legal costs.

The Zuma elephant in the NEC room