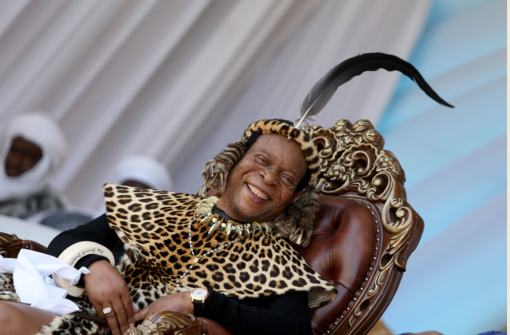 Zulu King Goodwill Zwelithini was all smiles during his 70th birthday celebrations at Enyokeni palace in Nongoma.
Image: THULI DLAMINI

A blood moon and a royal brandy were among the highlights of a lavish 70th birthday party thrown in celebration of South Africa's most pampered monarch, King Goodwill Zwelithini.

No expense was spared for about 500 guests, the who's who of the business and political world. They attended the dinner held in a marquee on the grounds of his KwaLinduzulu Palace in Nongoma, northern KwaZulu-Natal.

A light feature displaying "Bayede 70" greeted guests at the end of the red carpet and entrance to the glass-framed marquee.

King Zwelithini, wearing a white-and-gold Nehru suit, sat on a throne at the main table. Alongside were guests including businessman Vivian Reddy and acting provincial premier Sihle Zikalala.

The celebration is believed to have cost tens of thousands and was arranged by a Pietermaritzburg businessman, Sanele Ngcobo.

Reddy, who was one of the speakers, said the party was a well-organised, dignified affair.

"I admired his children, who lavished praise on their father for his achievements. I also echoed their sentiments. The king is well known for his efforts in social cohesion, looking after the interests of minority groups and his role in fighting HIV/Aids." 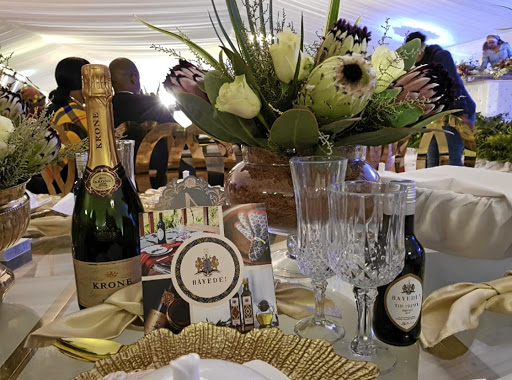 Reddy said the launch of a special Bayede brandy added to the excitement of the evening.

Another guest, Logie Naidoo, said King Zwelithini asked the guests to go outside to watch the lunar eclipse.

"It was a special moment when all the guests went outside and there, on the royal grounds, we all gazed at the blood-red moon. The king told us that the eclipse holds special significance because 139 years ago, during an eclipse, the Zulu defeated the British."

One of them, Phumuza Zulu, told the guests that his father was a "God-fearing king" and a very "loving father".

Bayede, Zulu for 'Hail the King', was a theme for a light feature.
Image: Thuli Dlamini

He said: "I had to tell people what kind of a king he is. A God-fearing king. So, as children, we have learnt to follow the same God because we can see what he does. Our father is such a loving father but very strict.

"We never grew up like princes at other royal families. We grew up like ordinary kids but we thought we were being abused. We did not know that our father was preparing us for these times.

"I want to tell you that big things are coming about this family. He said everyone one who wronged him must come and apologise because God is moving.

"All people who are against this kingdom, I am telling you right now, this is a prophecy, you are all going to be in trouble because God is in control, he is taking everything, so you must come to the king and apologise."

The king's daughter Nandi, who was married to Thembu chief Mfundo Mtirara but walked out of the marriage after accusing the Xhosa chief of infidelity, berated the media for writing negative reports about her father.

"I would really like you to appreciate us because it's very hurtful sometimes when some things are said about us.

All people who are against this kingdom ... you are all going to be in trouble

"Be careful what you say in the media about the king and our family. It hurts us. We did not bring ourselves here. God put us where we are. The best you can do is to embrace us and guide us because we also do make mistakes.

They also tucked in to caramelised and sliced beetroot salad with sweet and sour sauce, potato salad and Greek salad. 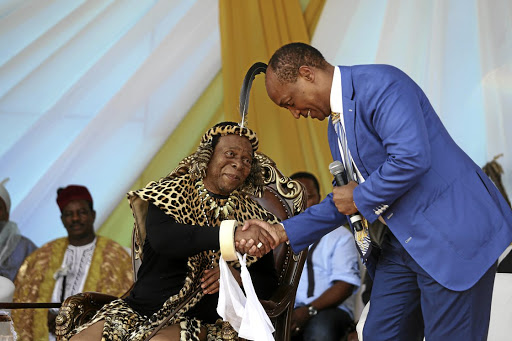 Generations actor Duma Mnqobi was the evening's programme director, facilitating proceedings between the speeches and entertainment that included a performance by a group called the Tenors.

Earlier in the day, at another birthday celebration at his Enyokeni Palace, King Zwelithini announced that he was opening his palaces to tourists, just like Buckingham Palace, to raise funds for nine new development projects including a Disney-style cultural theme park.

King Zwelithini, who has courted controversy for his lavish lifestyle, has come under the spotlight over an unfinished reed-dance venue that has been plagued by cost overruns and could end up with a price tag of about R1-billion.

Several cows were slaughtered for more than 2,000 guests and villagers who attended the celebrations at Enyokeni.

The first leg of the celebrations was characterised by traditional dancing by women clad in traditional gear. It included a lineup of maskandi artists, among them Thokozani Langa, Buselaphi, Khuzani and Sgwebo Sentambo.

Zulu monarch King Goodwill Zwelithini's celebration of his 70th birthday at his Enyokeni palace in Nongoma on Friday is expected to be attended by ...
Politics
3 years ago

Rich or poor: a tale of kings and two outcomes

South Africans must navigate the conversations about land and find in it the ways in which we can harness an equal and just society, writes Naseera ...
Business
3 years ago

While the rest of us mere mortals sink deeper into debt, weighed down by a soaring petrol price, job insecurity and the rising cost of living, Zulu ...
Opinion & Analysis
3 years ago

All smiles as Zulu king celebrates his 70th birthday

Zulu King Goodwill Zwelithini was a picture of happiness and all smiles during his 70th birthday celebrations at the Enyokeni Palace in Nongoma on ...
News
3 years ago