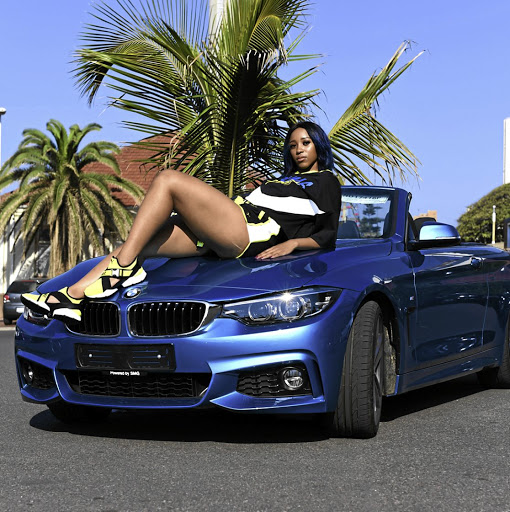 Sbahle Mpisane poses on the bonnet of the BMW M4 given to her on her birthday by her boyfriend, soccer player Itumeleng Khune.
Image: Supplied

The sports car in which socialite Sbahle Mpisane was nearly killed had been a generous gift and a gesture of love from her boyfriend, soccer star Itumeleng Khune.

It has emerged that the high-performance BMW M4 - which was wrecked when it ploughed into a pole and palm tree in Durban early on Thursday - is registered in Khune's name.

Mpisane, a well-known fitness trainer, is the daughter of controversial business couple Shawn and Sbu Mpisane.

She and Khune have had an on-off relationship since 2015. Khune could not be reached for comment.

They stayed friends after parting ways in 2016 and last month confirmed they had rekindled their romance. It is believed they reunited shortly before Mpisane's birthday in June, when she was first pictured atop the blue sports car.

Sources told the Sunday Times that Mpisane had been gravely injured.

One of the first paramedics on the scene said she had been "barely breathing".

"She was in a bad way," the source said. "She had a massive head injury and was barely breathing. Both her arms were fractured and she also had a broken leg. She was in a critical state."

Without the heroic action of personal trainer Brian Dube, who battled a fire that was set to engulf the wrecked sports car, Mpisane might not have made it out alive.

I just couldn't watch her burn alive in that car

Dube had barely rubbed the sleep from his eyes on Thursday when he heard the sound of crunching metal.

"It was around 4am and I was getting ready for my shift at the gym. I heard the sound of a car hitting the tree outside and ran to the window and I saw the car upside down," he said.

"I ran downstairs and I could see that the car was on fire. I grabbed a fire extinguisher from my building and with another man we managed to put the fire out."

At the time he had no idea that the woman in the driver's seat was Mpisane.

On Thursday, blood still stained the grass where Mpisane had been laid by paramedics on the centre island of Margaret Mncadi Avenue in the Durban city centre. A single yellow rose and a torn accessory box lay on the grass alongside debris from her car. 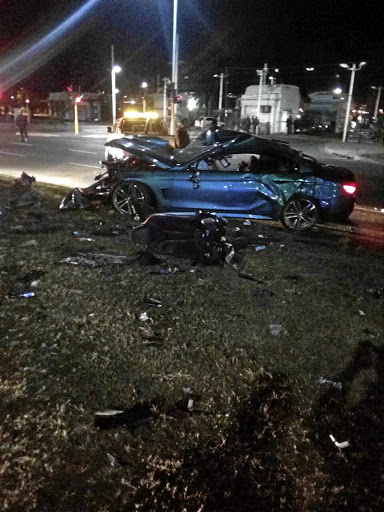 The wrecked sports car after it crashed early on Thursday in central Durban.
Image: Supplied

Standing where he'd extinguished the flames billowing from the engine, Dube said that damage to the car was unbelievable.

Sbu Mpisane, speaking from the hospital yesterday, said his daughter was a fighter. "If you look at the actual accident [and damage to the car] she should have died there on the side of the road, but she's fighting."

She had undergone emergency surgery on Friday night, he said.

"Right now she is still critical, but more stable. She is still on life support and she went into theatre last night and the operation went well.

"She had sustained multiple fractures and they needed to deal with the orthopaedic side of things. We are just praying now."

An accident reconstruction specialist, who spoke to the Sunday Times on condition of anonymity, said there was little doubt that it had been a "high-speed" crash.

The car accident which left celebrity Sbahle Mpisane fighting for her life has now become the subject of a criminal investigation.
TshisaLIVE
3 years ago

Sbahle Mpisane makes it through the night, but still in ICU

The star remains in a critical condition, as the nation prays for her.
TshisaLIVE
3 years ago