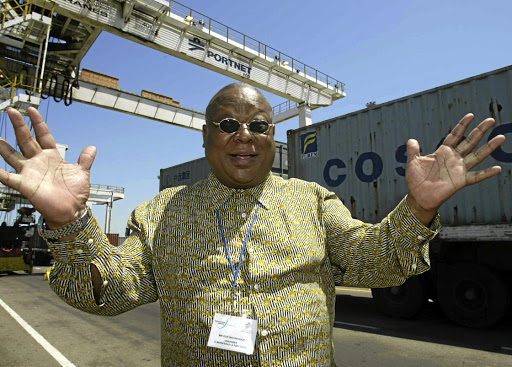 The late Don Mkhwanazi both presided over and won a R1.4bn deal.
Image: Jackie Clausen

Jacob Zuma's benefactor, the late Don Mkhwanazi, presided over a R1.4bn Transnet tender for tugboats that was later awarded to his own company, according to minutes of meetings leaked to the Sunday Times.

Mkhwanazi was chair of Transnet's acquisitions committee in 2012, when the specifics of the tender were discussed.

Almost two years later the tender was awarded to Southern African Shipyards (SAS), which is a subsidiary of Ocean Marine Services, a company of which Mkhwanazi was group chair until his death in 2016.

Mkhwanazi's involvement in the tender is revealed in minutes of board meetings that were attended by a number of senior Transnet executives, including then group CEO Brian Molefe and board chair Mafika Mkhwanazi, who is not related.

The Sunday Times reported in 2014 that SAS won the tender, despite Mkhwanazi being a Transnet nonexecutive director. However, the extent of his involvement in awarding the tender - and that he headed the committee that chose the successful bidder - has only now been revealed after the minutes were leaked.

The leak follows on concern that details of the tugboat tender were not included in the National Treasury's forensic investigation into Transnet, released last week.

The Sunday Times has seen the minutes of eight acquisitions & disposals committee meetings between January and December 2012, in which the tugboats were discussed in detail.

Mkhwanazi was listed as attending five of the meetings. At two of them, he recused himself when the tugboats were discussed, yet received minutes of those meetings.

He was also sent the bid package that had been discussed in a meeting from which he recused himself.

At one of the first meetings, in January 2012, Mkhwanazi is recorded as indicating his "discomfort due to the fact that the board discussed governance matters on the acquisition of the tugs in his absence".

The Department of Defence has funnelled R406-million for ship maintenance and repairs to a private company because it says it can no longer look ...
Lifestyle
6 years ago

A "request for proposal" for a company to design, manufacture, assemble, commission and deliver eight 70-ton and one 100-ton bollard-pull diesel-powered tractor tugs, fitted with twin cycloidal propulsion units, was first issued in November 2011. A tender was put out early in 2012.

The minutes said the acquisition would be conducted through a "transparent procurement process, through a clear evaluation criterion with emphasis on supplier development, BEE and localisation issues".

However, none of the companies that tendered met the requirements.

According to the minutes, in a June 2012 committee meeting, fellow committee member Ellen Tshabalala - who is believed to have a close relationship with Zuma and who was acting as committee chair on behalf of the recused Mkhwanazi - was reported as being concerned that none of the companies were deemed suitable.

"She informed the committee that she discussed her discomfort with Mr Mkhwanazi after she analysed both the committee and board decisions on the non-award of the tender," the minutes read.

Tshabalala then requested details of the contract, including specification, the recommendation submitted to the Acquisition Council, the detailed adjudication process and the particulars of the person who had developed the specification.

Transnet former board member Iqbal Sharma, who was also on the committee, accused her of supporting awarding the tender to Mkhwanazi despite a potential conflict of interest and SAS owing Transnet R18m in rental arrears.

In November 2012, the rental issue was referred to Molefe for resolution. "It was [also] recommended that the matter be reported to the social, ethics and human resources and corporate governance and nominations committees once it is resolved," read the minutes.

The minutes show the committee agreed Transnet would appoint external auditors to conduct an independent review "to ascertain if the process was fair, equitable, transparent, competitive and cost-effective".

A forensic report, which the Sunday Times has seen, said Mkhwanazi had access to the minutes in which the tug tender was discussed. It said the minutes had contained privileged information that other bidders would not ordinarily have had access to.

It recommended that Transnet seek legal opinion "regarding the impact of this on the fairness and equity of the tender process".

Despite the probe, the committee decided to award the tender to SAS and the contract was finalised in August 2014. The last tugboat was expected to be delivered this year.

Sources who sat in on the committee meetings in which the tender was discussed said Mkhwanazi had an advantage over the other bidders.

"We wanted transparency. Mkhwanazi sat in those meetings knowing very well he was conflicted," said one.

SAS spokesperson Lucinda Hippolyte did not respond to detailed questions.

Transnet spokeswoman Nompumelelo Kunene confirmed the tugboat tender had been approved in 2012 by the Transnet board of directors. "TNPA [Transnet National Ports Authority] followed all tender processes as per its procurement policy," she said.

Kunene said any perceived conflict of interest in relation to Mkhwanazi had been investigated and found not to be in contravention of Transnet procurement processes.

"At the time of awarding this contract, Mr Mkhwanazi was not a member of the acquisition committee," she said.

She confirmed there had been issues with rental arrears. "The rental matter was brought to the attention of all governmental processes and the dispute was settled and addressed as part of the contract."

Kunene said eight of the nine tugboats had been delivered.

Tshabalala said she saw nothing wrong in awarding the tender to Mkhwanazi's SAS.

She said she had not been influential in awarding the tender.

"I am not the only one who was sitting in those meetings who agreed to award that tender to his company. The decision to award was taken by Transnet board, not me."

The process followed in awarding a R12bn project-management tender to engineering consultants GladAfrica by the City of Tshwane was in contravention ...
News
2 years ago

The department of public works has forked out more than R56m on an unlawful lease for a Pretoria CBD building that tenants says is unsafe, with ...
News
2 years ago

Urgent work is under way to stop fishing harbours crumbling into the sea.
News
3 years ago