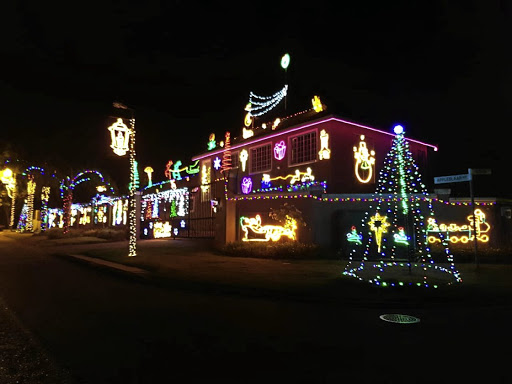 Rudolph the red-nosed reindeer might not survive the heat at the southern tip of Africa, but he has lent his name to an app that guides Christmas elves to some of Gauteng's best festively decorated homes.

The app was developed by Leigh Smith from Roodepoort in western Johannesburg, who visited light displays with his family throughout his childhood. "Then, all of a sudden, there were no more displays in town," said Smith.

Now Rudolph's Light Scout guides its users along routes in Roodepoort, the northern suburbs of Johannesburg, Krugersdorp and Alberton.

"We started with 12 homes and currently have 45 homes on display," said Smith, whose own light display in Wilgeheuwel is on the northern route.

"Last night we had a group of around 30 people singing carols outside our home, they had brought their children with and it was just such a wonderful moment," he said.

A house in Moray Drive, Bryanston, may well be the most festive home in Sandton. The driveway, verge and wall look like Father Christmas's workshop. In fact, he can be found sleeping next to the wooden home built for him on the verge.

Smith also recommends the Light Land display in Vermooten Street, Brackenhurst, Alberton. "This is the biggest display by far and is way bigger this year. It's a very cool experience."

Whoever you are, the happiness of Christmas is yours

The notion that celebrating on December 25 has anything to do with being Christian is false, writes Haji Mohamed Dawjee
Lifestyle
3 years ago

A Christmas message from the most well-travelled grandpa on the planet.
Lifestyle
3 years ago

Help make yours an appy Christmas

If the holiday season provokes more anguish than excitement, take your mobile meditation guide wherever you go
Lifestyle
3 years ago

No tinsel or turkey for high-profile killers behind bars

If the likes of axe-killer Henri van Breda and murderous estate agent Jason Rohde want that Christmas feeling behind bars, they'll have to pay R75.
News
3 years ago