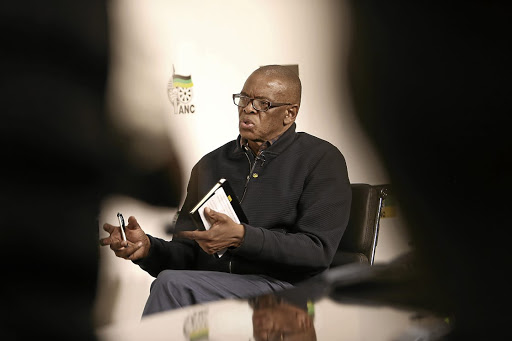 ANC secretary-general Ace Magashule is said to have inserted a clause in the party's manifesto stating its intention to nationalise the Reserve Bank.
Image: Alon Skuy

A commitment in the ANC's manifesto on the Reserve Bank has reignited sharp divisions in the party, with supporters of President Cyril Ramaphosa accusing ANC secretary-general Ace Magashule of "mis-representing" the party's platform.

A number of senior ANC leaders claimed that Magashule slipped in two sentences that he says promise to nationalise the Bank.

They said there was no agreement at the meeting of the party's national executive committee (NEC) before last weekend's manifesto launch that the sentences be inserted in the booklet.

They said the new clause creates "uncertainty by saying it means we are going to nationalise the Bank", and prompted a scramble among top officials, including Ramaphosa, to undo the damage.

The announcement caused panic in the markets, which prompted Bank governor Lesetja Kganyago to vow on Thursday to defend the independence of the Bank.

The manifest failures of the ANC's manifesto are all around us

The same bright, shiny, shameless promises are repeated each election, never to be actually met
Opinion & Analysis
3 years ago

Even Ramaphosa had to reassure the public that his party has no plans to tamper with the independence of the Bank.

The Sunday Times understands there was fierce debate before the launch on the independence of the Bank. The fight started at an NEC meeting in Durban on January 5.

"Some people were saying we must just put the Nasrec resolution on the nationalising of the Reserve Bank just like that in the manifesto," said an NEC member who did not want to be named for fear of reprisal.

He said there was strong push-back against that suggestion.

"We said you can't promise to do something when we have not figured things out yet. We have to do research. We can't put our resolutions just like that in the manifesto," the source said.

At the end of the discussion, Ramaphosa is said to have summarised the views expressed in the debate and there seemed to be consensus that the ownership of the Bank would not be touched.

But when the booklet was published, "what was in the manifesto did not adequately reflect the predominant views", the NEC member said.

For two days in a row, the front-page lead in Business Day has been about how "sacrosanct" the Reserve Bank's monetary policy mandate is.
Opinion & Analysis
3 years ago

The head of the party's economic transformation committee, Enoch Godongwana, said there was confusion "even within the ANC" about how to implement the Nasrec resolution.

Party leaders disagreed publicly this week on the party's position on the Bank.

Ramaphosa's backers claimed the NEC agreed only to the following: "Our macroeconomic framework, through fiscal and monetary policy, will be aligned to support the commitments made in this manifesto."

They were shocked to discover this additional sentence: "The ANC believes that the South African Reserve Bank must pursue a flexible monetary policy regime, aligned with the objectives of the second phase of transition. Without sacrificing stability, monetary policy must take into account other objectives, such as employment creation and economic growth."

Magashule told the media that these sentences meant the Bank would be nationalised.

But Ramaphosa this week disputed that, saying: "The manifesto had a paragraph on a wish and an aspiration, acknowledging that the Reserve Bank is independent and that there is no intention whatsoever to tamper or tinker with the independence of the central bank."

"What the president said is our position. Nothing else," he said.

On social media, finance minister Tito Mboweni hit out at those calling for the nationalisation of the Bank.

Another NEC member said that what came across in the manifesto was not what was decided by the NEC.

"We decided to support the president and what he said publicly. That is the line we are taking," the NEC member said.

The SACP's Solly Mapaila said there was debate about the Bank - and something had to be said about it.

"We believe the role of the Reserve Bank must be expanded to take into account job losses and economic development," said Mapaila.

The ANC took the decision to nationalise the Bank at its Nasrec conference as part of a series of compromises sought between those supporting Ramaphosa and those who supported Nkosazana Dlamini-Zuma under the banner of "radical economic transformation".