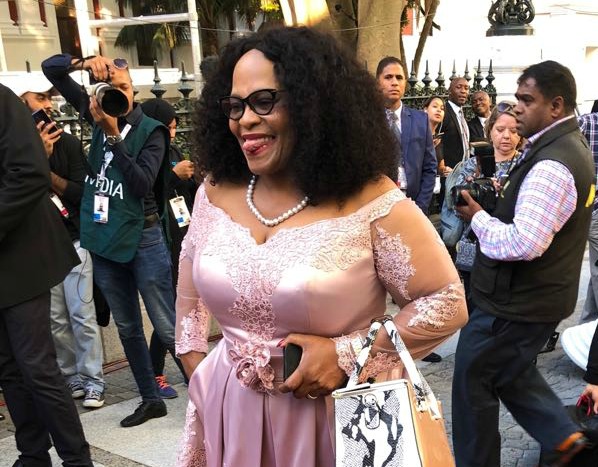 Minister of Water and Sanitation Nomvula Mokonyane on the red carpet ahead of the state of the nation address in Cape Town on 16 February 2018.
Image: Esa Alexander

Former Bosasa COO Angelo Agrizzi is expected to testify this week that the company footed the bill for family Christmas parties for Mokonyane, who is now environmental affairs minister. Myeni is the disgraced former SAA chair and chair of the Jacob Zuma Foundation.

A source close to Agrizzi told the Sunday Times they were targeted because they were close to Zuma. Mokonyane was allegedly approached while she was Gauteng safety and security MEC in 2002.

Agrizzi is also expected to allege that Gavin Watson was paying R300,000 a month in cash to Myeni for "onward payment to the Jacob Zuma Foundation".

He will describe how he would pack this money, and how Watson had asked his wife how he could impress Myeni. Give her a handbag, Agrizzi's wife said. A Louis Vuitton bag was arranged, which had R300,000 in cash inside. Myeni is said to have thanked Agrizzi personally.

The payments of R300,000 are said to have occurred monthly.

"Myeni would often call on Watson to arrange functions for president Zuma and his family. Watson and Bosasa directors would be invited," the source said.

Agrizzi will allege that Mokonyane, while MEC, approached Bosasa in 2008 to arrange an analysis of security at Gauteng hospitals; the information was later used by ANC Youth League entities to bid for the contract to provide hospital security.

A woman who answered Myeni's cellphone but would not give her name said she was in a meeting and cut the call. Questions were sent to Myeni but she did not reply.

"Bosasa, to the minister's knowledge, had no tenders in the course of [her] tenure as Gauteng MEC for safety and as minister of water and sanitation. The allegation of bribes in return for tenders is devoid of truth."

He said before answering questions she would have to look into his evidence.

"Our client reserves her rights to take legal actions against anyone who partake in a popularity contest at the commission using her name, including journalists that are being used to tarnish the good name of our client by making false, baseless and unsubstantiated reports.

"Our client is not prepared to wrestle with a pig in the mud."

Editor's note: In a previous version of this article, Myeni had not responded for comment by the time of publishing. Her comment has since been included.