Parents buy essays, speeches or science projects for their kids 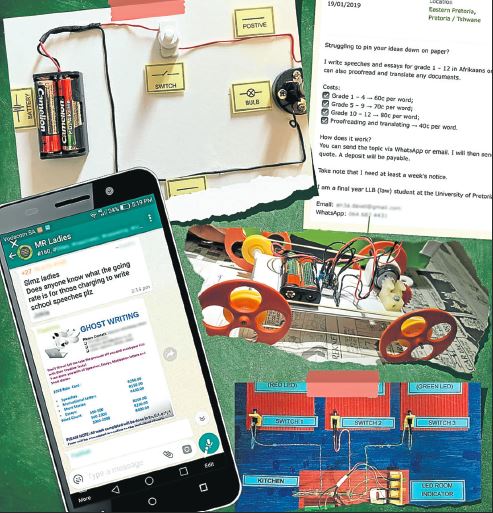 Some examples of the battery circuit board projects done for pupils by Yusuf Parak, a screengrab of a WhatsApp advert for the ’ghostwriting’ of school speeches and essays, and, top right, an advert on Gumtree offering the same service.
Image: Nolo Moima

Is your child having sleepless nights figuring out how to build a circuit board for a school science project?

For R200, Yusuf Paruk of Durban will build one that a teacher will "generally award a percentage mark of 85% or above".

But experts have slammed the practice of parents "outsourcing" their children's school assignments, saying it is counterproductive and encourages children to cheat their way to success.

Gauteng university student Andrea Davel, who advertises on Gumtree, will knock out a beautiful, original piece of writing for between 60c and 80c a word. She'll even ensure the standard of writing is at a plausible level for the relevant grade so that the teacher will not suspect that it is written by an adult.

Projects, assignments, essays and prepared speeches form part of the school-based assessment (SBA) tasks that make up 25% of a pupil's final promotion mark in a subject. The final November exam mark makes up the remaining 75%.

A member of a women's WhatsApp group, comprising about 250 members from Montgomery Park and Roosevelt Park in Johannesburg, recently caused a stir when she posted a message asking about the going rate for a fee to write children's prepared speeches.

Contacted for comment, the woman admitted to getting outside help "at times" to write her children's prepared speeches because she was worried they would get low marks if they did it on their own.

"Their marks have improved after using private people," she said before ending the call.

Responding to the woman's inquiry, another member of the WhatsApp group posted an advert by a Gauteng freelance writer, Zaytoon Abed, which contained Abed's prices from last year for writing services.

Johannesburg private schools have been accused of blacklisting two boys who had to leave Pridwin Preparatory School because of rows between their ...
News
2 years ago

Her advert read: "Don't stress. Let me take the pressure off you and assist your kids with their creative tasks."

Contacted by the Sunday Times, Abed admitted to writing pupils' prepared speeches for a fee but did not respond to subsequent phone calls and a media inquiry e-mailed to her.

A parent who did not want to be named expressed disgust at the practice of parents paying others to do their children's assignments and projects.

"These kids are buying their way through school and that's not right. My daughter spends hours writing her prepared speech and sometimes has to redo it if the teacher is not happy." She said the outsourcing of assignments flourished in most of Johannesburg's wealthy suburbs.

He added: "Any parent or learner, or private person indulging in this practice must question their ethics and values. Their moral compass has long since disappeared.

"Learners must make mistakes in order to improve. The continued practice of allowing somebody to complete a task for you can only end in failure," said Rooyakkers.

Shaun Simpson, headmaster of Rondebosch Boys' High in Cape Town, said a good mark for an SBA assignment in which such cheating took place was "a bit of a pyrrhic victory".

He said: "The student has learnt nothing, and this will tell in the end. The pupil's lack of preparation will come back to haunt him under controlled examination conditions."

He said those caught with work that was not their own were given a zero for the assessment.

"At our school, a consultation with the parents and student, and a working weekend detention are applied."

Paruk told the Sunday Times he did not force anyone to use his services and declined to comment further.

Davel said some children were destined to become professional athletes and tennis players and were simply not geared for writing. Asked about pupils passing off her speech as their own in class, she said: "I'm a ghost writer, so the moment they purchase the speeches from me, it becomes their work."

Basic education department spokesperson Elijah Mhlanga said: "This basically means parents are encouraging their children to cheat their way to success, and this may catch up with them later, at university or in the workplace.

"It does nothing to help the child's learning and development and is actually counterproductive.

"We must all discourage it."