After money spent on Bushiri 'special prayers', congregant has no taxi fare to go home 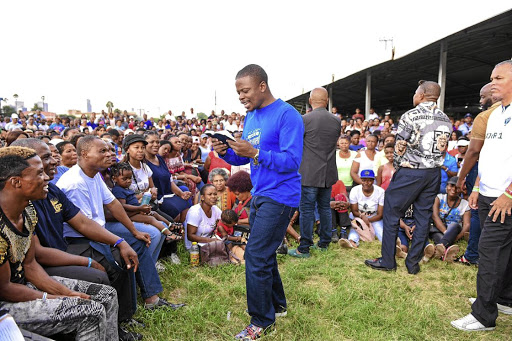 Shepherd Bushiri, seen here preaching, is out on bail after being charged with, among others, fraud.
Image: Facebook

Two days after self-proclaimed prophet Shepherd Bushiri was released on R100,000 bail, 33-year-old Tebogo Mogashoa made her usual trek from Krugersdorp to Pretoria to hear him preach.

In her wallet was her monthly tithe of R1,000 and an extra R100 for the collection basket.

At the end of the sermon, full of the spirit but with an empty wallet, she stood outside with her eight-year-old son, counting on the charity of fellow believers to get a lift back home.

A visit by the Sunday Times to Bushiri's service last week at the Tshwane Events Centre - just after he was released on bail - revealed that during his services, which usually last about seven hours, at least 40 Speedpoint machines pass through the main hall where Bushiri, 35, preaches, and through two adjoining halls.

The man who calls himself Major One invites people to come forward to place their special cash pledges at the cross-shaped altar - to guarantee a special prayer intercession on the giver's behalf.

"I call everyone with a special prayer request to come forward with your seed," Bushiri says.

In his first major sermon since being charged with fraud, self-styled prophet Shepherd Bushiri compared himself with the apostle Paul
News
3 years ago

Outside, his army of vendors are doing a roaring trade.

Photos of Major One sell for between R70 and R100, or congregants can buy a package deal - a church calendar with photos of Bushiri for R100.

The armbands, at R70 each, have a dual purpose, says a congregant who only introduces himself as Zikron: it helps them to identify fellow worshippers and protect them from evil spirits.

To aid the workings of the wristband, bottles of anointed water and anointed oil are sold for R100 and R150 respectively.

Don't forget those pens for R20 to take notes during the sermon, or a T-shirt for between R150 and R200.

R15.3m - the amount Bushiri allegedly paid in cash to purchase a private jet

Every two weeks, for R1,500 a head, Bushiri shares business advice at his hotel in the Magaliesberg. "This is where Major One teaches us business skills, how to thrive in business and how to acquire wealth," Mogashoa said.

But Mogashoa, a graphic designer, believes in the special prayers, having found a job shortly after she pledged R5,000.

But three months ago, after her son and then she fell ill, she quit her job and took on a freelance position, freeing up her Monday and Fridays to attend church in Pretoria.

She said she "felt it in her spirit" that the pledge was a seed she needed to sow in order for God to answer her prayers.

"Life is OK. I can pay my bills and I'm not struggling at all."

After every service, attended by 25,000 people at a time, hundreds gather while a church official calls on congregants to help with transporting their fellows.

Major One Bushiri 'duped us with gold scam'

Controversial pastor Shepherd Bushiri may have another legal battle on his hands, with at least six of his congregants claiming they were "duped" ...
News
3 years ago

"There's always that one person who goes in the direction that you're going and will feel sorry for you. This is just how it is," Mogashoa said.

In 2015, the Commission for the Promotion and Protection of the Rights of Cultural, Religious & Linguistic Communities heard how church members paid R5,000 to have one-on-one sessions with Bushiri.

The church denied that the money from theses sessions was used to enrich Bushiri.

The commission found the church was in breach of the Nonprofit Organisations Act because it had not been audited.

Bushiri and his wife, Mary, are out on R100,000 bail each after being charged with fraud, money laundering and contravention of the Prevention of Organised Crime Act.

The contravention is in relation to exchange control regulations, allegedly involving foreign currency of $1.1m (about R15m).

After a bad week for Shepherd and Mary, a prophecy: Major 1 is staying

From the cell and back to the pulpit: Bushiri timeline
News
3 years ago

'Dr' Bushiri blows into microphone, congregants 'fall' to the ground

Bushiri to congregants: 'Major 1 is staying, it is done'

Enlightened Christian Gathering church leader Shepherd Bushiri told thousands of congregants gathered at a service on Sunday February 10 that he is ...
News
3 years ago

Shepherd Bushiri made his return to preaching on Sunday after his bail application succeeded.
News
3 years ago