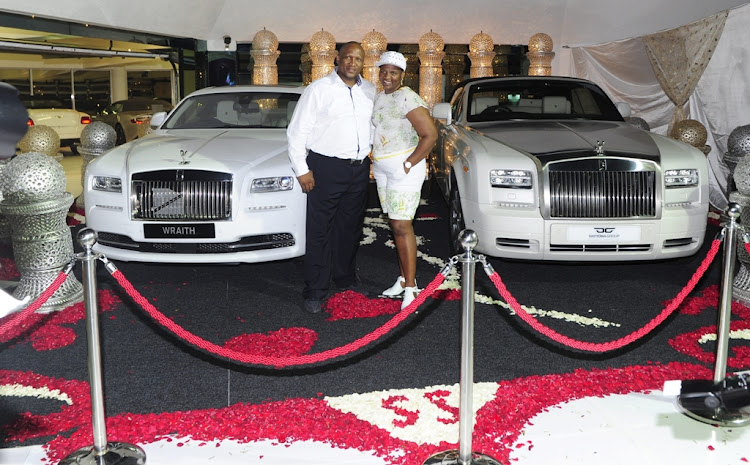 S’bu and Shauwn Mpisane pose with their two Rolls-Royces. Each bought the other one of these expensive cars and showed them off at their end-of-year party in 2013.
Image: Gallo Images/Khaya Ngwenya

Power couple Shauwn and S'bu Mpisane, known for their love of Versace and Maseratis, are about to go belly up in more ways than one.

On Valentine's Day, the controversial couple, who are going through a divorce, were served with a nasty surprise from the taxman.

The Mpisanes received a sheriff's notice relating to an application brought by curators appointed to liquidate their personal assets and those of their companies.

As if the Valentine's Day shock was not enough, on Friday the couple were served with another notice. It informed them that the liquidation matter between them and the South African Revenue Services (Sars) had been set down for a hearing in the Durban high court on Wednesday.

The high-flying couple are known for hosting lavish wedding anniversary parties and New Year's Eve all-night parties at their La Lucia mansion, where guests include A-list celebrities and leading politicians.

One of the companies owned by high-flying Durban businesswoman Shauwn Mpisane is facing liquidation over a multimillion-rand tax bill.
News
4 years ago

The court action relates to an urgent application brought by Sars in December 2016. It concerns a tax dispute with the couple's companies, which include Zikhulise Maintenance and Transport, Zikhulise Auto Restorers, Inyanga Trading, Royal Eagles Football Club, Zikhulise Auto Recoveries, the Zikhulise Group, and the Sbusha Trust.

Sars claimed it was owed about R204m.

Pieter Strydom and Tshifhiwa Mudzusi were appointed by the North Gauteng High Court in November 2016 as curators of the Mpisanes' multimillion-rand estate.

S'bu Mpisane said the matter was sub judice. His wife did not respond to an SMS request for comment.

Shauwn Mpisane amassed a fortune from building low-cost houses and is the director of most of the couple's companies. She and her husband, a former metro policeman, own Royal Eagles, a soccer team in the national first division.

Among the couple's assets seized by Sars in 2016 under the Tax Administration Act was their three-storey mansion in La Lucia, in Durban North, a 54ha farm in the KwaZulu-Natal midlands registered under the Sbusha Trust, a BMW X5, a Dodge Ram and other cars. The mansion was bought in 2007 for R15.5m.

According to court documents seen by the Sunday Times, the curators also seized the couple's bank accounts. A number of accounts have been frozen by some banks.

The curators attached statements that showed the couple had an investment account worth R5m, Royal Eagles Football Club worth R7m and Zikhulise Auto Restorers worth R1m.

In his affidavit, Strydom said the curators did not intend to adversely affect any of the couple's businesses but that their efforts to examine financial documents and determine the couple's worth had been thwarted by the Mpisanes.

For the first time in almost a year, extravagant tenderpreneur couple S'bu and Shauwn Mpisane will have unobstructed access to their properties, ...
News
7 years ago

"We throughout adopted the view and communicated with all parties our intention to assist and to enhance the business activities of the respondents where possible. We have bent [over] backwards to accommodate the respondents and have not interfered with their activities," said Strydom.

"Regrettably, we have since our appointment been frustrated by the respondents, and our involvement in their business activities has been met with some resistance."

He said the curators' frustration was highlighted by the Mpisanes' businesses all being conducted and operated as a single entity, with the main source of income being the low-cost housing project.

The curators resolved to appoint a Durban-based forensic auditor to take control of the affairs of the affected businesses on a day-to-day basis with effect from March 1 2017.

Strydom said the Mpisanes historically seemed to have made various payments from their business account, but these were not related to their operations. Payments included one of R500,000 made to a consultant and R200,000 to Shauwn Mpisane.

Sicelo Mkosi, a Sars spokesperson, said the tax collector did not comment on matters relating to private taxpayers.