Helena, the desolate exile, has become known as the 'place of witches'

Trauma never dies for 'sorcerers' cast out of their homes 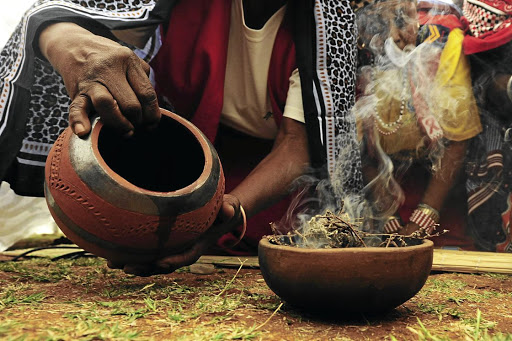 To outsiders, Helena is known as Tulo Yabaloyi - "the place of witches" in Sepedi - and its residents remain on the fringes of society because of the accusations.
Image: Thulani Mbele

In the village of Helena - a forgotten dumping ground for those accused of sorcery and witchcraft in the rocky flatlands of Limpopo - only the youngest children are blind to the pain that lingers there.

The children, descendants of traditional healers and others who were run out of the surrounding townships in the early 1990s during a purge that targeted anyone accused of witchcraft, carry the stigma of their parents and grandparents.

To outsiders, Helena is known as Tulo Yabaloyi - "the place of witches" in Sepedi - and its residents remain on the fringes of society because of the accusations that had them driven into the wilderness nearly three decades ago.

But for the people who were part of the forced exodus - threatened with death by their neighbours and exiled to a dusty patch of veld about an hour's drive northwest of Polokwane - the trauma is indelible.

A traditional healer from Helena, who spoke to the Sunday Times on condition of anonymity for fear of reprisal, said his family had been expelled from an adjacent settlement in 1991.

The decriminalisation of 'harmless witchcraft' to be realised in the near future?

For more than 40 years Damon Leff has identified himself as a witch practising herbalism and divination, a form of spirituality he uses to ...
News
2 years ago

"I was young when it happened. My grandparents were accused of causing lightning, but it was not like that. There was jealously from other people in the community," he said.

"The people removed the roof of the house and took the belongings with a tractor and a car. We were sent to this place called Helena."

A single dirt road snakes across the landscape, leading to a cluster of nondescript houses that are home to no more than 100 people.

"Life is hard here," the traditional healer said. "When people know you come from here they don't like you and they stay away. No one wants to be here but no one else wants us."

Another villager approached by the Sunday Times said that it was too painful to talk about the day she was forced from her home.

Traditional Healers' Organisation spokesperson Phepsile Maseko said Helena's people were sent to the settlement with only the belongings they could carry.

No one wants to be here but no one else wants us.

A traditional healer from Helena

"They were dumped with nothing. It is a village that is forgotten," she said.

"Communities were not happy with healers in their villages. They used the guise of witchcraft to steal their things and force them out.

"They would make noise outside and destroy windows before they petrol-bombed homes and looted the valuables. It is obvious that it stemmed from criminality."

She said her organisation had called on the Commission for the Promotion and Protection of the Rights of Cultural, Religious and Linguistic Communities to probe the living conditions in Helena.

In 2015 the commission found a village without water, electricity, road infrastructure, schools and health facilities.

Commission spokesperson Mpiyakhe Mkholo said village children had not been able to go to nearby schools.

"They too had to deal with stigmatisation and name-calling. They were referred to as 'those kids from the witch village'," he said.

While the village now has electricity and a small school, there is still no running water.

A grade 10 pupil at a Gauteng high school was formed to drink “anointing oil” to rid her of her “demons”, the CRL Commission heard on Friday.
News
2 years ago

"High levels of trauma and anger persist there due to stigmatisation and ostracisation by the neighbouring community," Mkholo said.

The commission had invited the department of co-operative governance & traditional affairs to listen to the challenges and "take over the matter so that it could be handled between the department and the respective local authority".

The department did not respond to questions from the Sunday Times.

But according to Maseko and the villagers who spoke to the Sunday Times, little has changed in Helena.

This week the Sunday Times was barred from interviewing residents of Helena by the Moletsi Tribal Authority, seemingly at the instruction of Kgoshi Kgabo Moloto III. The pursuit of the story would be "suicidal", they insisted, adding that residents were "happy" and that the trials of their past had been long forgotten.

Beyond the village of Helena, the country is facing a "refugee crisis", said Damon Leff, head of the South African Pagan Rights Alliance.

"By being denied access to counselling and restorative justice, the living victims of [witchcraft] accusation - refugees of incitement, hatred and violence - are currently not afforded any assistance or protection by the government," he said. - Additional reporting by Thapelo Morebudi