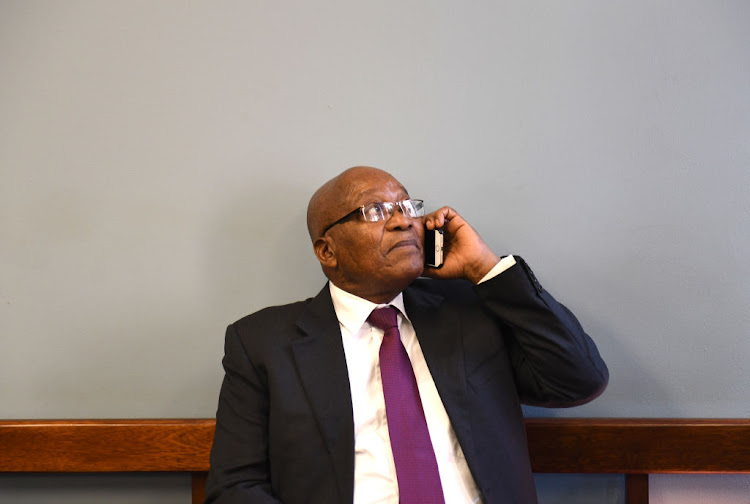 Jacob Zuma is set to testify at the Zondo commission of inquiry into state capture on Monday.
Image: Gallo Images / Netwerk24 / Felix Dlangamandla

The ghosts of Jacob Zuma's past will come back to haunt him when he appears for the first time before the Zondo commission of inquiry into state capture tomorrow.

It is not known if the former president will physically take the stand, with the commission refusing to respond to questions on this issue. But whether he testifies under oath or not, there are important questions he needs to answer.

While the infamous Gupta family feel like a distant memory in their self-imposed Emirate exile, the former statesman's role as their alleged enabler will again come under the spotlight when questions about his relationship with brothers Ajay, Atul and Rajesh will be put to him.

Though he denies involvement in any state capture, Zuma has been implicated directly by a number of key witnesses who have appeared before the commission.

They have alleged that Zuma abused his executive powers as president between 2009 and 2017, making decisions that allowed for various government departments and state institutions to be repurposed for the benefit of a politically connected few, and allowing for the widespread looting of state resources over his nine years in office.

MILLIONS IN GOVERNMENT ADSPEND TO THE GUPTAS

One of the first witnesses to appear before the commission last year, former Government Communication and Information System (GCIS) boss Themba Maseko, said Zuma instructed him to help the Guptas in 2010.

Maseko yielded, after numerous requests from the well-connected family for a meeting, and on the day he was expected to meet them at their Saxonwold home, he said, he received a call from Zuma.

"The Gupta brothers need your help. Please help them," he recalled Zuma telling him.

At their meeting, Maseko claimed, he was ordered by one of the Gupta brothers to direct the GCIS's entire R600m media advertising budget to the family's media interests.

When he refused he was sacked, and the money GCIS spent on advertising and other services provided by Gupta-owned media companies tripled thereafter. 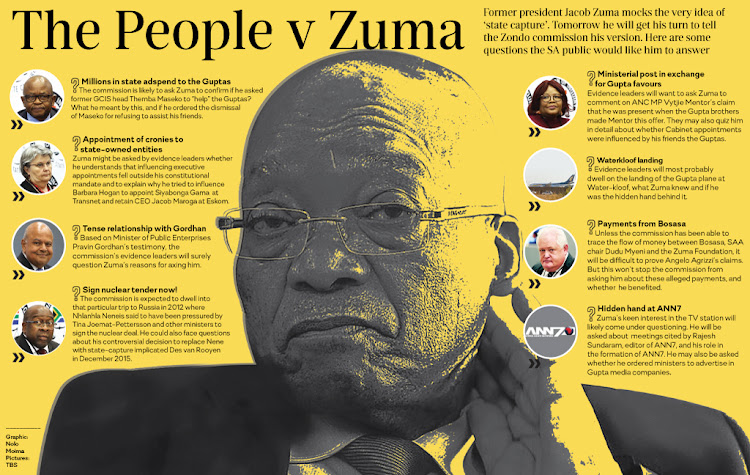 The commission is likely to ask Zuma to confirm whether he asked Maseko to "help" the Guptas, what he meant by this, and if he ordered the dismissal of Maseko for refusing to assist his friends.

APPOINTMENT OF CRONIES TO STATE-OWNED ENTITIES

Former public enterprises minister Barbara Hogan also took the stand, telling the commission that Zuma instructed her to appoint certain people to key executive positions at various state-owned entities. In one example, Zuma is said to have insisted on the appointment of Siyabonga Gama as group CEO of Transnet. At the time, Gama was facing charges over irregularities related to a tender awarded to a company owned by ANC heavyweight Siphiwe Nyanda.

According to Hogan, Zuma once angrily instructed that a process to replace then Eskom boss Jacob Maroga, whose contract was coming to an end in 2012, be stopped.

"I got a telephone call from the president and he was really furious and he was shouting at me. He said, 'Maroga, you've got to stop it.' He said 'tell them [the Eskom board] that they have got to stop now' . And short of just defying him, it was a very confusing situation. I didn't have any knowledge if the president had any further matters which he could not disclose to me," Hogan said.

Zuma might be asked by evidence leaders whether he understands that influencing executive appointments fell outside his constitutional mandate and to explain why he tried to influence Hogan to appoint Gama at Transnet and retain Maroga at Eskom.

Next came the current public enterprises minister, Pravin Gordhan, who pulled no punches when describing his relationship with Zuma when he served in his administration as finance minister.

He said he believed that his sacking in 2017 was a move by Zuma to have court processes regarding the closing of Gupta-related bank accounts withdrawn.

Gordhan was on an investor roadshow in London with Treasury director-general Lungisa Fuzile when they were summoned back to SA by Zuma.

This was only days before the North Gauteng High Court was to hear arguments on Gordhan's application seeking declaratory relief from having to intervene with commercial banks on the closure of Gupta-related business accounts.

"One could surmise that the intention was to get rid of us, put in another minister and withdraw the application to the Pretoria high court," Gordhan told the commission.

The past decade has been characterised by the paralysis of law enforcement agencies to act against corruption, the looting of state coffers, the ...
Opinion & Analysis
2 years ago

Based on Gordhan's testimony, the commission's evidence leaders will surely ask Zuma to supply reasons for axing him.

Gordhan's predecessor Nhlanhla Nene told the commission he was pressured by Zuma and former energy minister Tina Joemat-Pettersson to sign off on a controversial trillion-rand nuclear deal, despite there being no information on its financial implications and funding model.

"I believe that I was removed from office because of my refusal to toe the line in relation to certain projects. In hindsight, it seems that those projects may have benefited the Gupta family and other close associates of the president," Nene told the commission.

He was axed in December 2015 and replaced with Des van Rooyen in a move that sent financial markets into a frenzy and almost tanked the economy. Zuma could face questions about this controversial decision.

The commission is expected to dwell on a particular trip to Russia in 2012 when Nene is said to have been pressured by Joemat-Pettersson and other ministers to sign the nuclear deal.

Former ANC MP Vytjie Mentor told the commission she was invited to the Gupta family's Saxonwold compound in 2009 under the impression that she was going to meet Zuma. At the house, Mentor claimed, one of the Gupta brothers offered her Hogan's public enterprises portfolio in exchange for getting SAA to drop its Mumbai route.

Evidence leaders will want to ask Zuma to comment on Mentor's claim that he was present when the Gupta brothers made her this offer.

They are also expected to quiz him in detail about how cabinet appointments were made during his presidency and whether these were influenced by his friends the Guptas.

Former cabinet minister and ANC veteran Ngoako Ramatlhodi made the startling claim that the Guptas had the power to summon the president to their home and that they would even boast about it.

"In the [ANC's national executive committee], we would raise this issue with [Zuma]. We would say this relationship with these guys is toxic, why don't you end it . He would say 'these people are my friends because they would help my children'. He said they would get them jobs 'when I was persona non grata'," Ramatlhodi told the commission.

He alleged that Zuma had two secretaries when he was president, one appointed officially by the state and another from within the Gupta business empire who would "handle" his other diary.

Ramatlhodi also told the commission about anger in the ANC and in the government when it became apparent that the Guptas had been allowed to land a plane full of wedding guests at Waterkloof Air Force Base. He said they advised Zuma not to attend the Gupta wedding.

Evidence leaders will most probably dwell on the landing of the Gupta plane at Waterkloof, what Zuma knew about it and whether he was the hidden hand behind it. He is also expected to be asked about the influence the family had on him, based on Ramatlhodi's testimony.

The first allegation that Zuma received monetary benefit for abusing his state powers came from former Bosasa COO Angelo Agrizzi, who told the commission that the then president was on the company's payroll. Zuma allegedly received R300,000 a month from Bosasa, paid in cash to Dudu Myeni, who chairs the board of the Jacob Zuma Foundation.

In exchange, Zuma is said to have used his influence to help effect legislative changes, smoothing the way for Bosasa to do business with the state. Zuma's influence is also alleged to have assisted the company to frustrate investigations by the Hawks into the company's dealings.

Unless the commission has been able to trace the flow of money between Bosasa, Myeni and the Zuma Foundation, it will be difficult to prove Agrizzi's claims. But this won't stop the commission from asking him about these alleged payments, and if he was the ultimate beneficiary.

Another person who implicated Zuma in wrongdoing is Rajesh Sundaram, former editor of the Gupta-owned 24-hour news network ANN7.

He described three meetings at which he was present, where Gupta brothers Ajay and Atul, along with station bosses, met Zuma at his official state residence in Pretoria to discuss ANN7 before its launch.

At these meetings Zuma apparently instructed that there "should be no lampooning of politicians" and suggested what form the station's editorial policy should take.

He is also said to have approved the station's logo and suggested the names of journalists and presenters the station should hire. He even, according to Sundaram, coined the acronym ANN7.

A week of reckoning lies ahead. SA has waited for years to hear former president Jacob Zuma respond to the mountain of allegations that he colluded ...
Opinion & Analysis
2 years ago

"Zuma wanted the station to be centred around him and the politicians who supported him," said Sundaram.

Zuma's keen interest in the television station will likely be the subject of a line of questioning. He will be asked about the meetings cited by Sundaram, what was discussed and his role in the formation of ANN7. He may also be asked whether he ordered members of his cabinet to spend their state advertising budget with the Guptas' media companies.

Though he faces a mountain of allegations, it is unclear whether Zuma will provide any real answers when he appears at the commission. Through his lawyers, Zuma has previously slammed the commission as being "politicised" and biased against him.

The Sunday Times understands that security has been ramped up for Zuma's appearance as both his supporters and detractors are expected to stage demonstrations near the venue. Roads surrounding the venue are likely to be closed off and all vehicles entering the area will be searched. An increased police presence is also expected, with Zuma's supporters expected to gather at Pieter Roos Park near the commission's venue before proceedings begin.

The commission's spokesperson, the Rev Mbuyiselo Stemela, would not answer questions from the Sunday Times about which evidence leader would question Zuma or what additional security measures were being taken for his appearance.