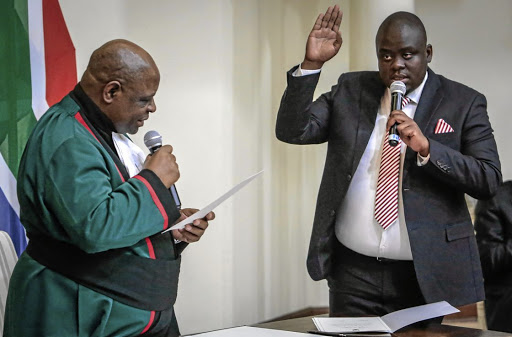 During the home affairs budget vote on July 10, deputy minister of home affairs Njabulo Bheka Nzuza emphasised the department’s purpose, the services it offers its people and responsibilities required to fulfil its important role and to serve to the people.

These are the main points he made in his speech:

"If we want a world-class home affairs with world-class immigration systems, we must be comfortable to discuss discomforting issues. The Greek mathematician Archimedes teaches us that 'the shortest distance between two points is a straight line'. To solve our problems, we must be upfront, frank and direct," said Nzuza.

He said that SA is today a great place to live in and many people in the world aspire to live and work in the country and to be South Africans;  and laws that have been developed are humane, business friendly and go beyond just conforming to international standards on immigration.

"We do not run refugee camps but we allow integration of refugees to local communities.

"We give refugees the same rights as citizens except for the right to vote. They have access to our social services such as basic health and social grants," said Nzuza.

"SADC countries do not require a visa but only a passport to visit SA. We do not deny foreign nationals to work, study and to do business in SA provided they comply with the Immigration Act and related legislation."

The white paper on international migration of 2017 states: "International migration in general is beneficial if it is managed in a way that it is efficient, secure and respectful of human rights. In general nations flourish where people with different origins, skills, resources and cultures are able to live work and trade peacefully."

Nzuza said that despite these open and friendly channels of migration, there are still those who enter the country illegally, undermining the sovereignty of SA.

In an operation conducted at the Marian Hill and Tongaat toll plazas in KwaZulu-Natal between July 1 and 7 2019, 39 foreign nationals were caught driving trucks without permits and the legal status to be in the country. One employer has already been charged and more arrests are imminent.

Nzuza said: "We will curb the appetite of employers to employ undocumented foreign nationals all in the name of profits. They must know that when they break the law and employ illegal immigrants they will face the consequences and our inspectorate unit.

"We have a serious responsibility to capacitate our inspectorate and allocate the necessary funding in order to enforce immigration laws that decisively deal with illegal immigration and its impact on our economy, social security spend and national security."

Nzuza said the National Targeting Centre profiles trusted travellers and registers them in the e-gates system which will open for them automatically when they present themselves at airports of entry. The system also conducts risk assessments on visitors after they have boarded flights as a secondary control system. This ensures undesirable and risky visitors are kept at bay, to create a secure environment for the country.

"We are building a modern home affairs. As a result of this technology, our airports will now rank higher within the international community making it a desirable destination for doing business," Nzuza said.

This article was paid for by the Department of Home Affairs.