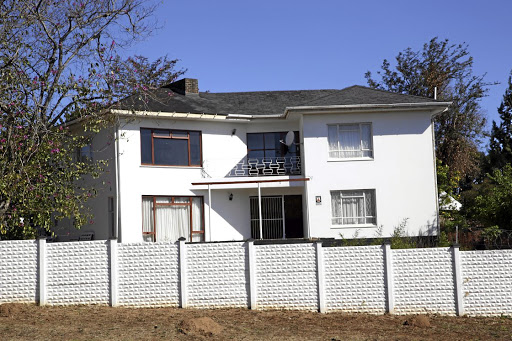 The house at 6 Lukin Road, King William's Town, that Nonyameko Bongiwe May says she paid R20,000 to a public works official to secure.
Image: Thapelo Morebudi

Businesswoman Nonyameko Bongiwe May told the Sunday Times this week that she made a R20,000 payment to public works official Thando Sentile with the aim of buying a state-owned double-storey house in King William's Town.

The department owns dozens of houses in and around King William's Town, some of which are rented to government officials and others used as residences by members of the provincial legislature.

"I was approached by Sentile and he promised to help me to rent to buy a house in town," May said. "He asked me to bring R20,000 in cash as a sweetener to his boss in Port Elizabeth. I gave him the R20,000 as I wanted the house as it was in a prime spot and was big enough for the lodge I wanted to start."

She said she was shocked when, six months later, she was evicted by public works officials.

Crime syndicates working with corrupt department of public works & infrastructure officials are fleecing the government of millions of rands through ...
News
2 years ago

"I had already spent close to R10,000 painting, doing landscaping and cutting trees. This guy has been running away from me for nearly four years. Now all I want is my money," she said.

Businessman Thembekile Siyolo also said he paid R20,000 to Sentile, who had offered him a choice between two properties, one in King William's Town, one in East London.

"He showed me pictures of both and asked me to pay R20,000 in cash. Since I trusted him and we were in the same church, I didn't know that he was a crook. He has since moved to Port Elizabeth and I have struggled to locate him," Siyolo said.

May and Siyolo admitted to the Sunday Times that they knew they were paying bribes.

R70.9bn - The estimated value of the state's buildings

Sentile, then a site supervisor for the department, resigned two years ago to start his own electrician's business.

No criminal or disciplinary charges were laid against him.

He insisted that he was merely a "middle man" and the money went to another official, who he declined to name.

"I have been struggling to get hold of them as I want to pay them back. I took the money but not for myself but for someone else," said Sentile.

"I was just the middle man... I will pay them their money back next week. We have agreed with them that this story must not be published."

Siyolo and May confirmed that Sentile had called them and promised to repay them if they stopped the Sunday Times publishing the story.

Public works spokesperson Thami Mchunu confirmed the houses Sentile admitted receiving payments for belonged to the department. "There is no record of any sale to a private individual," he said.

A former SAA cabin attendant is living the high life after marrying her army boss boyfriend. Now military police are investigating whether the major ...
News
2 years ago

Public works minister Patricia de Lille has waded into an R80m harbour repairs row after the suspension of a top government official whose family ...
News
2 years ago