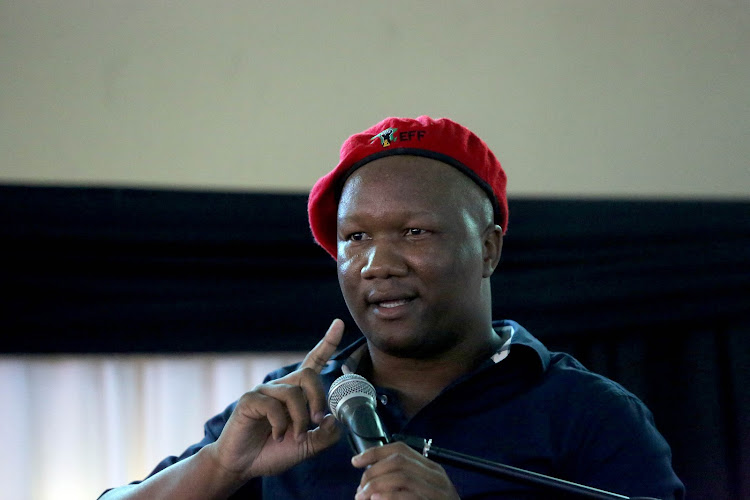 Marshall Dlamini grouping, Gardee is unlikely to have enough support to return to the job of chief administrator of the party.
Image: Thuli Dlamini

This is according to several sources in the EFF who this week indicated that those close to Malema have begun lobbying for Dlamini to be elected as the new secretary-general at the party's national congress in December.

The insiders said that with Dlamini enjoying the support of Malema's grouping, Gardee is unlikely to have enough support to return to the job of chief administrator of the party.

The sources said the positions of Malema and his deputy Floyd Shivambu were expected to be uncontested, but there is strong lobbying within the party by members close to Malema for Dlamini to oust Gardee.

Dlamini is credited with the EFF's impressive growth in his home province of KwaZulu-Natal over the past five years, according to sources.

Former DA leader Tony Leon and his long-time ally Ryan Coetzee have made a dramatic intervention in the party's leadership crisis.
News
2 years ago

Sources said another plus for Dlamini, who is a former businessman, is that he spends his own money on EFF party political activities.

"Marshall spends a lot of his own money on party work and he never complains about it," said a source close to both men.

"When it comes to Gardee, yes, he is a hands-on SG, works hard and attends to many important matters, including engaging legal people on party court issues, but he is not as popular as Marshall."

Dlamini had not responded to requests for comment at the time of going to print.

He made headlines this year when he was filmed slapping a plain-clothed police officer at parliament after the state of the nation address in February. The matter is the subject of court proceedings.

But EFF sources speak highly of his work rate in the party, especially in KwaZulu-Natal, where he is the national central command team's deployee.

Other insiders said Gardee seems aware that he is on his way out, privately telling EFF members that he is planning to practise law full time.

Gardee laughed out loud when contacted this week about his future in the party. "Only the [conference electoral commission] is competent to ask that question," he said, adding that he would respond at the conference should the question be put to him there.

He dismissed suggestions that the current party leadership had its own preferred candidates ahead of the December congress.

EFF branches were scheduled to complete the nomination of delegates to its national people's assembly at the end of September.

According to the party's guidelines for the process leading up to the national conference, branches are allowed to discuss "the leadership question".

In terms of the guidelines, nominations for positions will only be made from the floor of the conference, which is scheduled to sit from December 13 to 16.

EFF national spokesperson Mbuyiseni Ndlozi declined to comment on the internal lobbying. "Discussions regarding leadership have to be strictly internal."