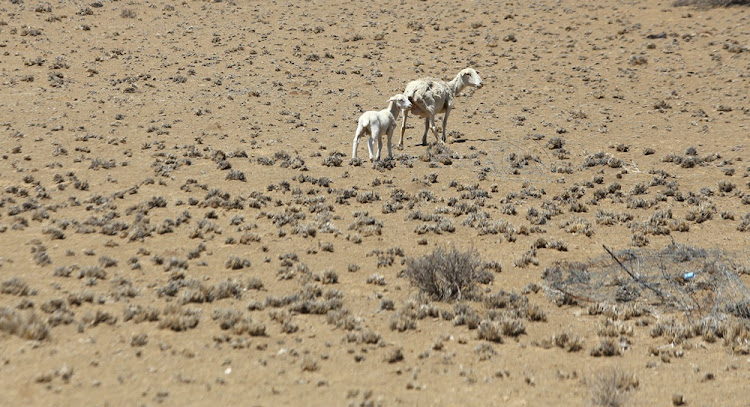 Gift of the Givers, an NGO that has been assisting drought-stricken farmers across SA, has recorded eight suicides by farmers since 2014 because of drought, and two more suspected to have been due to drought, said its founder, Dr Imtiaz Sooliman.
Image: ESA ALEXANDER/SUNDAY TIMES

"If the river was running, Dad would never have done it."

These are the words of an eight-year-old boy at his father's funeral in 2017.

Sutherland sheep farmer Sybil Visagie said the boy's father, a fellow farmer, had taken his own life because of the stress of a crippling five-year drought in the Northern Cape.

Visagie has known the family - who she did not want to name - for a very long time.

She said everything was going well for the boy's father until a "dry spell" in 2012 signalled changing fortunes.

"The next year we had an official drought, and by 2014 his farm had run out of available grazing. He had to start buying feed but kept falling behind on his bond repayment," said Visagie.

He shot himself on the farm he had tried so hard to hold on to.

Visagie said she knew of three other farmers who had taken their lives in the area over the past few years.

Gift of the Givers, an NGO that has been assisting drought-stricken farmers across SA, has recorded eight suicides by farmers since 2014 because of drought, and two more suspected to have been due to drought, said its founder, Dr Imtiaz Sooliman.

He said several more farmers had suffered heart attacks due to the stress of no longer being able to provide for their families, their workers and their flocks or herds.

According to the latest Agri SA Agricultural Drought Report, emotional support to farmers is as important as financial aid, fodder and boreholes.

More than half the farmers the organisation spoke to indicated they were suffering from some form of depression, anxiety or other behavioural health problems because of the drought.

Agri Western Cape CEO Jannie Strydom said the department of agriculture is working with regional representatives to identify farmers who may need counselling.

"Producers' livelihoods are under severe pressure and it impacts on their state of mind," he said.

Joyene Isaacs, head of the department of agriculture in the Western Cape, is organising counselling sessions with spiritual leaders for farmers.

"I know of two farmers who committed suicide because of the drought," she said. "We are using local leaders of all denominations to assist farmers because outsiders don't really understand the area and the cultures here."

Western Cape head of the department of agriculture, Joyene Isaacs

Visagie broke down as she spoke of how the desperate bleating of sheep haunts her, as she delivers fodder for desperate farmers under her organisation, Save the Sheep.

Since 2014 she has had to reduce her flock to a third of its original size.

Her lamb fetches R64/kg at abattoirs or on auction, down from R90/kg the same time last year.

"So when you take the rising costs of fodder and everything else it takes to raise a sheep, the farmer makes just R14 a sheep. If a big farmer has a herd of 1,000 sheep they make R14,000 a year.

"You can't lay workers off, what will happen to their families? There are some church groups coming around to counsel people in the town, but the best counselling is fodder for the animals.

"Farmers care very much for their animals and to have to walk away as they are dying is very painful. Ewes are not producing milk any more. In the past we would hand-rear lambs, now we have to leave them to die," said Visagie.

Willem Symington, a sheep farmer in Graaff-Reinet in the Eastern Cape, said many farmers were experiencing a sense of hopelessness and depression.

"I would compare the stress to living in a war zone, except you can get away from a battlefield," said Symington.

"Imagine a scenario where a farmer who has been self-sufficient for 30 years now has to stand in a queue to receive a box of groceries. And another queue for a few bits of toiletries like soap and toothpaste."

"Three people I know committed suicide over the drought," he said.

"I would have expected more, but farmers are also tough people."

South Africans dying of thirst as drought guts the nation

If water is life, SA is beginning to look dead on its feet.
News
2 years ago

Dineo Moteka, 36, waits for an hour to fill her two 20l buckets from a spring on a hillside in QwaQwa. On her back, she carries her baby, protected ...
News
2 years ago

Time is running out for Sutherland, the Karoo dorp with the world-famous view of the stars.
News
2 years ago