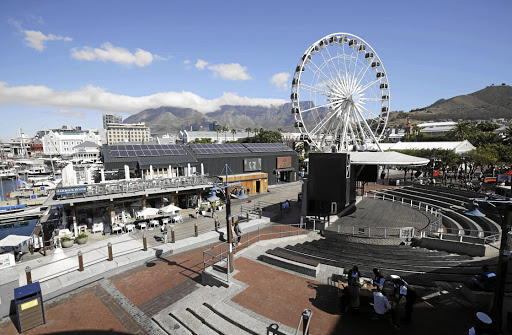 It was not business as usual at the V&A Waterfront in Cape Town after SA took steps to curb the spread of the coronavirus. Without effective social distancing, SA could be swamped by Covid-19 cases.
Image: Esa Alexander

The army could be deployed to patrol SA's streets to delay the need for a countrywide lockdown if there is a huge spike in Covid-19 infections, as experts now fear.

A possible national "state of emergency" - the first to be declared in SA in more than 30 years - could be introduced as a last resort if looming lockdown measures fail to halt the spread of the virus.

Health minister Zweli Mkhize said the possible measures would go way beyond existing measures, which include a ban on social and religious gatherings, the closure of bars and shebeens at 6pm on weeknights and shutting down public spaces.

Mkhize said the government would gradually impose stricter measures as the virus spreads before the worse case of a national shutdown.

As the disease took hold in SA this week, it was announced yesterday that 240 people have tested positive, up from 202 on Friday and 150 on Thursday. Of those, at least 16 were infected in SA, while the rest had travelled here after having been infected in other countries with high prevalence rates.

We are going through what is the greatest crisis of modern times.
Opinion & Analysis
1 year ago

Mkhize said on Thursday scientific predictions suggest 60%-70% of people in SA will be infected with Covid-19. And if the rate is not slowed, the public health system will not cope. He told the Sunday Times that if current restrictions do not limit the virus's spread, the army will soon be patrolling the streets to enforce them.

If that does not work, the government will look at area-specific lockdowns to contain epicentres of the virus. And if still unsuccessful, a national lockdown will be the last resort before a state of emergency.

"Right now it is restrictions. [We] might have to begin to bring in the army to go out and work around the people, talk to them about hygiene, getting them to go sanitise, and so on," said Mkhize.

"As we sit and look at the epidemiological spread of the infection, we would begin to isolate areas where it is worse."

Mkhize said the government will be guided by the rate the virus is spreading before deploying the army.

"There isn't a number, but there is a pattern that we want to prevent, and that is the internal transmission exploding," he said.

President Cyril Ramaphosa will get a full briefing on the situation today and decide on the next step forward at a meeting of the National Command Council.

Projections presented to the department of health anticipate hundreds of thousands of infections and tens of thousands of deaths. Mkhize said the situation will worsen when the outbreak reaches a stage where officials cannot trace how a patient became infected.

"It gets to a point where the infection enters a phase where contact tracing becomes impossible. That's when you have a problem where you can find the disease anywhere. When that happens we must not have too many people already infected," he said.

Currently, the department of health's data on confirmed cases can be broken down to every town. Once areas with uncontrolled outbreaks are identified, lockdowns will be applied before a countrywide lockdown.

However, senior military officials told the Sunday Times that the South African National Defence Force (SANDF) cannot afford a lockdown. The defence force, they said, has analysed its resources and found that it does not have sufficient personnel or equipment.

"For an effective lockdown, we need much more than what we currently have otherwise it's as good as nonexistent. Its chances of success are minimal," said one military official.

In terms of regulations for a state of disaster, the SANDF must mobilise soldiers, equipment, stores, aircraft platforms, vehicles and facilities which, senior military officials say, it does not have.

The military official said they would not be able to secure quarantine sites in districts across the country, would have to recall all soldiers deployed to the borders, and still the police would have to assist.

SANDF spokesperson Simphiwe Dlamini said since the repatriation of 146 South Africans from Wuhan in China a week ago, the military have been planning for all eventualities. "We are waiting for the multi-disciplinary team leading government's response to say there is a need for the defence force to enter. We will abide," he said.

"We are part of the planning throughout and part of meetings daily."

The number of locally infected people is key to any impending lockdown, academics say, with 100 local infections the tipping point for a massive outbreak in any country.

Modelling by Wits University academics shows that once 100 people become locally infected, 1-million people could contract Covid-19 within the next 40 days.

People spray commuters with hand-sanitiser as a preventive measure at the Wanderers taxi rank in Johannesburg.
Image: Michele Spatari/AFP

The government has obtained multiple modelling scenarios on Covid-19 infections and potential deaths from academic institutions, but the data from Wits is new in that it centres on the trigger point for the virus's exponential spread in SA.

Physicists, computer scientists and engineers behind Wits's infection simulation say that, given the speed at which the virus spreads, the 100-person localised infection mark is "imminent".

The Wits team, led by physics professors Xifeng Ruan and Bruce Mellado, worked for more than a month using global infection rate statistics to map SA's growing Covid-19 threat. Their data was handed to the department of science & innovation on Thursday.

Mellado said that when localised infections hit the 100-person mark, "that is time zero. After then infection numbers explode."

The figures do not take into account the effect of Covid-19 on SA's population who have HIV and TB.

Mellado stressed the figures are based on a situation where no containment measures are adhered to, and evidence from China and France shows that a lockdown has a significant effect in curbing the virus's spread.

"If government's containment measures, especially social distancing, are not followed the infection numbers become a terrifying reality," he said.

"What is clear is that in SA we are seeing a doubling time of Covid-19 infections every three to four days," said Madhi.

The best approximation of the virus's potential spread comes from statistics on seasonal influenza, which affects a third of the population each year.

"On average, about 22-million people are infected with seasonal influenza," said Mahdi. "While about 90% are completely asymptomatic or only have mild symptoms because of immunity built up over the years, with Covid-19 we have no immunity to this virus.

Business has proposed amendments to the Unemployment Insurance Fund (UIF) Act to allow workers to claim from UIF if companies are forced to temporarily close or implement shorter working hours because of the coronavirus.

But employment & labour minister Thulas Nxesi said the government could not immediately commit to this.

A document prepared by Business Unity SA, Business Leadership SA and the Black Business Council - which was presented at the National Economic Development and Labour Council this week - proposes the adoption of short-time as an alternative to retrenchments, with workers allowed to claim the shortfall in wages from the UIF. The fund has R100bn in reserves.

"The UIF (which enjoys a considerable surplus) should be accessed to cushion the blow on companies arising from pandemic-related downtime," the document says.

Nxesi, however, said: "We don't know what the implications of that will be in terms of our affordability. Actuaries must crunch the numbers. We can't just talk about giving money, not knowing what the projections are saying."

The government should not be the only one to carry the cost of coronavirus, he said.

Mr President, I am very sorry, I am sure you wish you had never received this call.” This is how health minister Zweli Mkhize broke the news of SA’s ...
News
1 year ago

Surprise, surprise! The fly in Ramaphosa's Covid-19 ointment is a Zuma flunkey

There was a brief period when quoting the late 1970s Chinese leader Deng Xiaoping was in vogue among ruling ANC politicians.
Opinion & Analysis
1 year ago

In many countries the coronavirus has suddenly sickened healthy economies. In SA the sudden stop in activity could kill an economy which was already ...
Opinion & Analysis
1 year ago

An antiviral pill, which has been found to shorten Covid-19 infections by up to a week, is being sold to governments around the world by two ...
News
1 year ago