Soldiers 'forced' to patrol streets during lockdown in 'unsafe gear' 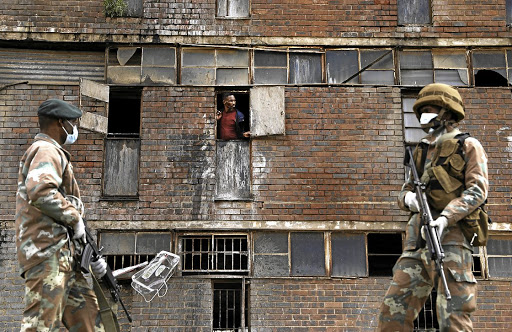 Soldiers on patrol yesterday in Johannesburg. Claims have surfaced that the troops have been supplied with ineffective and substandard anti-viral gear.
Image: Alon Skuy

Soldiers helping to enforce the lockdown have been put at risk by sanitisers and face masks that don't meet safety standards.

Sources in the defence force and the department of defence said the poor quality of such equipment had led to anxiety among the soldiers, whose health was at risk.

They said about R10mn had been spent on equipping the army with protective gear, which included hand sanitisers and masks.

They said much of the equipment, particularly the sanitisers and masks, had failed safety tests at the Protechnik Laboratories, which is part of Armscor.

The tests found the hand sanitisers, procured under the watch of the defence force's chief of logistics, Lt-Gen Jabulani Mbuli, were either alcohol-free or contained only 40% alcohol.

This is below the minimum safety requirements of the World Health Organisation and the National Institute of Communicable Diseases which have strictly stated that safe hand sanitisers should contain a minimum of 60% alcohol.

The Sunday Times has seen the laboratory test results, which were done by Protechnik on March 30. Three days earlier soldiers had been issued with the substandard equipment.

The sources and insiders said Mbuli and defence force chief Gen Solly Shoke had acted against the advice of the Military Health Services. They said when the results of the tests were known, the two generals allegedly refused to recall the sanitisers and masks.

“The small bottles with 40% alcohol have been issued to the soldiers [who are] in the front line irrespective of the objections from the [health services]. Gen Mbuli refused to recall the substandard sanitisers,” said one of the insiders.

“The dust masks were issued to the soldiers while they were [being] tested by Protechnik and the masks failed. These are the masks that the soldiers are wearing in the front line. Millions have been spent already and more substandard masks and sanitisers are to be delivered to the defence force.”

The insider said that the health services had “stood their ground” that the masks and sanitisers were not up to standard. “And this has caused a big fight.”

Sources said that late on Friday, the defence force chiefs, following questions from the Sunday Times, hurriedly removed the stored sanitisers and masks from one of the depots in Pretoria. The equipment was then moved to an undisclosed location.

Dlamini said the minister did not get involved in operational matters.

Dlamini yesterday confirmed that the Protechnik Laboratories had run tests on the safety equipment and material meant to protect the soldiers. But he said only “a few slipped between the cracks”.

“All the protective gear that is used for our deployed soldiers is tested by Protechnik, a subsidiary of Armscor, the agency of the department of defence, to verify the conformity or efficacy of the required standard.

It ’s ludicrous and unfortunate

“However, there have been a few which slipped between the cracks, which were found not to be according to the required standards, and these have been urgently recalled,” said Dlamini.

He did not to respond to allegations that R10mn had been spent on sanitisers and masks.

He said it was “ludicrous” and “unfortunate” to suggest that Shoke and Mbuli had refused to take advice from the health services.

“The opposite is the truth. The urgency has been to make sure that our members receive all protective gear needed when they are in the field.”

Dlamini said that the lives of soldiers had not been put at risk.

The defence force “would like to allay any anxiety or fears to our deployed members about the safety measures put in place. It would be highly irresponsible of the military health to play with the lives of our gallant soldiers who have laid their lives for the protection of our fellow South Africans by giving them substandard protective gear,” Dlamini said.

The taxi industry has moved to set up its own emergency fund to cushion its members against the economic effects of the national lockdown. This ...
News
2 years ago

Parliament's standing committee on public accounts (Scopa) has warned government officials that it will go after those caught looting public funds ...
News
2 years ago