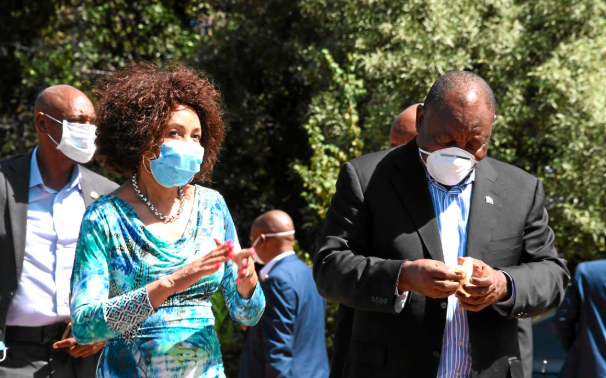 Water and sanitation and human settlement minister Lindiwe Sisulu, whose plans to move informal settlements residents have been met with resistance.
Image: SUPPLIED

Planning and housing experts also warned that money for the moves should be used rather to improve hygiene, and access to water and food.

Sisulu’s spokesperson, McIntosh Polela, said she was talking to civic organisations in the hope of getting communities to agree before presenting her plans to the cabinet.

“She will be working with other government entities, including municipalities, once there is an agreement with the communities.” He said the minister was aware that people in these communities “always resisted” being moved. Discussions are being facilitated by nongovernmental organisations.

“As for the budget, this is a constantly moving target and one cannot put a price on human lives,” he said.

Sisulu has ordered the urgent move of selected communities in Gauteng, the Western Cape and KwaZulu-Natal.

The plan’s details have been left to provincial and local governments. Little is known about how communities have been selected, whether households and families will be split up, how properties will be protected or, once the virus has been contained, if people can to return to their homes.

The plan targeted 29 settlements, five of which are priorities: Stjwetla in Alexandra, Johannesburg, Kennedy Road in Durban, Mooiplaats in Pretoria, Duncan Village in East London and Dunoon in Cape Town.

KwaZulu-Natal human settlements MEC Peggy Nkonyeni said her department was not planning to move anyone from Kennedy Road. “We will be following our programme [of upgrading informal settlements],” she said.

“We have a number of transition camps in KZN. We are very, very much scared [of] establishing other transit camps now because many people have been staying there for more than 10 years and if you ask me how their living conditions are … they are very, very bad. We cannot continue promoting establishment of transit camps in KZN. We are in a process of reducing them and we even agreed that we will demolish them.”

In the Eastern Cape, a highly placed official said there were no immediate plans to move households from Duncan Village. He said although the provincial government had identified empty land in East London and Port Elizabeth for possible resettlement, this would be done only if a suspected case of Covid-19 was reported.

“You cannot just move to announce that you are moving people because you would be creating panic,” he said.

In Gauteng, insiders said Sisulu had not consulted human settlements MEC Lebogang Maile about her plans.

Western Cape human settlements MEC Tertius Simmers said that in the absence of a plan from the national government, the province and Cape Town planned a “rapid informal settlements support upgrade”.

The plan would target two settlements identified by Sisulu; Kosovo, near Philippi on the Cape Flats, and Dunoon, near Table View on the west coast. There is an estimated budget of about R553m for the whole project.

Simmers said the province had not yet been allocated a budget by Sisulu, nor been given targets and timelines for the project.

He said the national government should align its plan with the realities because a large number of people living in the settlements did not qualify for the department’s housing programme.

Professor Philip Harrison, the South African research chair in spatial analysis and city planning based at Wits University, said people could not be ripped from their homes. “A plan like this won’t be achieved within a month. By the time you get a major relocation and de-densification programme off the ground, the country will already be devastated.”

He said the government should put its efforts into improving sanitation, food security, monitoring and testing, and isolation and quarantine strategies. Removals would cause “conflict which we can ill afford”.

South African Cities Network researcher Siphelele Ngobese said though global medical evidence on Covid-19’s spread had forced city authorities to think about de-densification, it had to be carefully balanced to ensure people’s rights to housing and employment.

“The department must show how people’s rights will be guaranteed, when they can return home, how their properties will be safeguarded and how their economic livelihoods will be secured if they cannot return home.”

Professor Marie Huchzermeyer, of the Centre for Urbanism and Built Environment Studies at the Wits School of Architecture and Planning, said de-densification came with enormous costs.

“It not only isolates households, but also separates homes from livelihoods, and breaks social ties, which are the very basis of what makes informal settlements work as a survival base for the unemployed and poorly paid workers.” —

The eThekwini municipality will continue to demolish unoccupied shacks within the city during the Covid-19 lockdown.
News
2 years ago

The City of Cape Town is using repurposed tankers from the food and beverage industry as water trucks under emergency regulations to provide water to ...
News
2 years ago