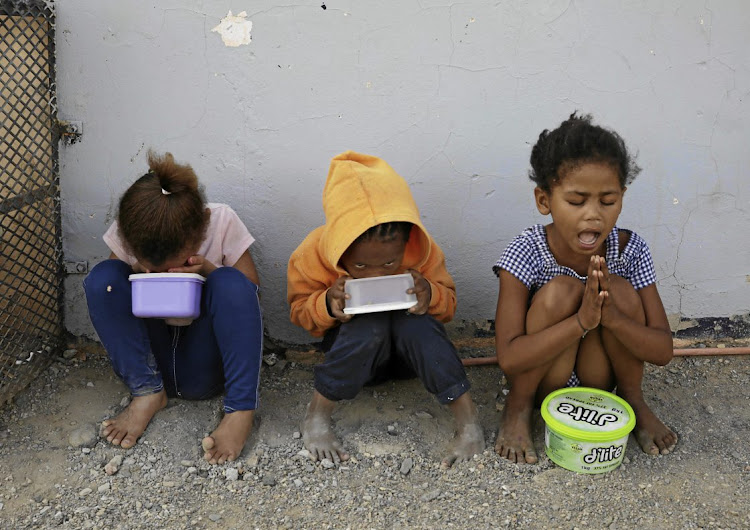 Hungry children offer up a little prayer for food. They are among millions going hungry as a result of the national lockdown, which is keeping breadwinners out of work. The children above were being given a meal this week by the Prince Albert Community Trust, in the Western Cape, which provides food for them during the lockdown at the Path Out of Poverty centre.
Image: Esa Alexander

As the government grapples with finalising a plan to feed a growing number of desperately hungry people amid the Covid-19 national lockdown, shelters say they are seeing starving people who have not eaten for up to a week.

A crucial cabinet meeting tomorrow will consider proposals to provide relief to save millions from hunger - including a temporary increase in social grants and introduction of a basic income grant.

This comes amid growing calls for President Cyril Ramaphosa to announce a bold stimulus package for SA.

The matter was discussed at the National Economic Development and Labour Council (Nedlac) on Friday, when civil society urged Ramaphosa to consider topping up social grants and introducing a basic income grant for the unemployed. At the meeting, organised business said about 3-million jobs are at risk.

Social development minister Lindiwe Zulu told the Sunday Times the government is working on various options to extend the safety net and offer relief to citizens who are not registered as beneficiaries. 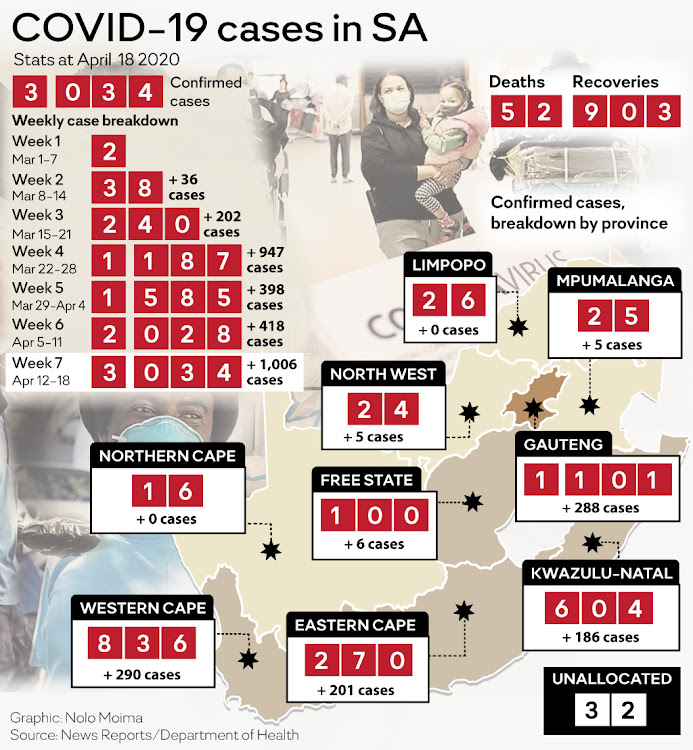 The proposals include increasing the child support grant of R445 to between R600 and R700 and topping up the pension grant for the elderly by an extra R500, up from R1,860. No figure has so far been attached to the basic income grant proposal.

The proposal is that the government expands the net to reach more people in the informal economy, including street vendors and gardeners.

"If you look at the social grants - the child grant is below the poverty line which means we must increase that. And then you have the social grant that is for the elderly, we have to look at increasing those.

"What we want to do is use the systems that we have and upscale them. But the challenge is developing systems that are quick in reaching the people," said the minister.

Yesterday the presidential co-ordinating council, which includes ministers, mayors and premiers, "agreed that measures be put in place to ensure that more cash should be put in the hands of households to induce economic activity in the medium term". Proposals will be tabled at the cabinet meeting.

We should try to get food parcels out because there is an immediate crisis, but it's not the most efficient way. It's a logistical nightmare.

Business Unity SA chair Sipho Pityana, who also attended the Nedlac meeting, warned against temporary adjustments to social grants: "Our fiscal constraints notwithstanding, we have to apply our minds as to the adequacy of our social security arrangements and consider what else we need to do to mitigate the impact of that.

"Bear in mind that we have limited fiscal space. When we adopt policies, even as interim arrangements, we must also worry about their sustainability. If they are short-term we must worry about what happens when we no longer continue with them. Are you sowing the seeds of discontent? Sustainability becomes a big factor in thinking about these things. We mustn't try and solve problems with a short-term view, these are long-term issues," Pityana said.

"We projected there would be big problems in terms of food in poor communities. But the clamouring for food parcels and food unrest happened even quicker than we predicted," said the group's head, Mervyn Abrahams.

"We should try to get food parcels out because there is an immediate crisis, but it's not the most efficient way. It's a logistical nightmare. Government's criteria for those who qualify for these food parcels is not working. How do you tell citizen A you can't get, but citizen B, you qualify, when both of them are starving?"

South African Food Sovereignty Campaign co-founder Vishwas Satgar said their estimates were that the number of "food-stressed people" had doubled from last year to 30-million.

This includes 4-million people in the informal sector who cannot work and 18-million people on social grants who do not earn enough to buy increasingly expensive food.

"There are 1-million domestic workers and nearly 90,000 waste-pickers who don't have money to buy food. There are 3.5-million elderly people and 12-million children whose grants are not enough to buy food.

"For a household of four to secure the basic food staples requires them to receive at least R2,500. In most cases this is not happening."

Satgar said women, especially mothers, are at the forefront of the hunger crisis, with many going without so their children can eat. He said the government's Solidarity Fund - which on Friday began rolling out food parcels to 250,000 families - is a good initiative, but it is not working to get food to those most in need.

Satgar called for the military to establish field kitchens and for the police and army to help distribute food.

"They are there in the communities. They see people who are starving. If this does not happen we risk a massive spread of the looting of grocery stores. Government must urgently create a citizen's basic income grant to assist people in buying food."

Changing seating plans so that pupils’ chairs are at least 1.5m apart and a ban on the sharing of desks are among the measures the department of ...
News
1 year ago

National Shelter Movement executive head Dr Zubeda Dangor said hunger and food insecurity are dire. The movement is an umbrella organisation for 80 shelters housing more than 1,000 abused mothers and their children across SA.

"A big concern from the lockdown is the number of mothers coming to the shelter with their children who are starving.

"On Friday two mothers came to the Soweto shelters. One had not eaten for a week. The other had not had food in three days."

At house C19 in Nsimbini informal settlement, on the outskirts of Chesterville, Durban, Thabisile Langa, 27, is counting down the days until she receives her grant payment. All she has left in the house to feed herself, her child and her four sisters is a half-full 5kg bag of rice.

It has to sustain them for 11 days.

"The children don't have enough food," said Langa, who until the lockdown had been able to provide for the family with piecemeal domestic work.

"They need to eat in the morning, afternoon and in the evening, but there is not enough food."

Nothemba Mandla, of Extension 7 in Diepsloot, Johannesburg, has queued for a food parcel every day since Tuesday, each time only to be told that supplies have run out. "We are going to starve, and I don't know what I will do," the 55-year-old said, leaning against a wall in the shade, a stone's throw from the food distribution point.

In Steenberg, Cape Town, mother of four Lee-Anne Jacobs was one of dozens of residents queueing at a soup kitchen set up by senior Mongrels gang member Leon "Poppie" Meyer on Thursday evening. She said her family now eats only twice a day.

"I really don't know how we are going to make it. In this community real hunger would mean death, that's the way I see it, people will die of hunger," said Jacobs.

"When that is finished I am in trouble," she said.

Her mother died last year and her brother supports her family, but since the lockdown began he has been unable to work.

"I am going to ask my neighbours. Or if I can go to fetch the food parcels, I will try that. I have to do something," she said.

Paula Proudlock, a senior legal researcher at the University of Cape Town's Children's Institute, said SA's 10-million children who benefit from school feeding schemes are now all at home.

"The meal they received daily . was often the only meal for many. There are 13-million children receiving child support grants, but many of the caregivers, who supplement the grant with informal employment, cannot work because of the regulations.

"On top of this, households that receive any type of a social grant cannot qualify for the government's food parcel system. That's because there are not enough food parcels to go around."

Malibongwe Magusheni and his family are down to one meal a day and have only enough mealie meal for two days.
News
1 year ago

On Friday, Gift of the Givers began distributing 100,000 food parcels from its warehouses in Cape Town, with Johannesburg and Durban to follow.

"Hunger is a greater challenge than Covid-19," said its head, Imtiaz Sooliman.

The R350 parcels, containing food donations from corporations, will be supplied through feeding centres around the country.

Breadline Africa is providing about 15,000 hot meals every week to hungry children in informal settlements. In some places, they are escorted by private security because of desperate people stealing the food off the back of trucks.

"We tried food parcels, but these are open to abuse," said director Marion Wagner.

Thousands of people in Cape Town's working-class areas lined up this week in front of pots of food prepared by neighbours, NGOs, religious organisations and even gangsters.

Earlier in the week, food shops were looted in suburbs including Manenberg and Mitchells Plain. One video shows people running towards the tills, looking for cash, while others grab eggs.

Senior Mongrels gang member Meyer, who has been providing the community with food, said: "I felt I needed to do it first so I could inspire the other gang bosses to do the same. We can take it further and get together and expand it.

"This will make the people think twice about going and robbing spaza shops and convenience stores."

Several people were arrested and stores looted after protests over expected food parcel deliveries at Mitchells Plain in Cape Town.
News
1 year ago

No food, no money, no job — how can we stay indoors? ask Brakpan residents

The Covid-19 lockdown in Tsakane township, Brakpan, is not obvious at first sight. People walk or stand in groups with no masks or gloves
News
1 year ago

A campaign to persuade the government to urgently increase child support grants by R500 for six months has received 557,707 out of a target of ...
News
1 year ago