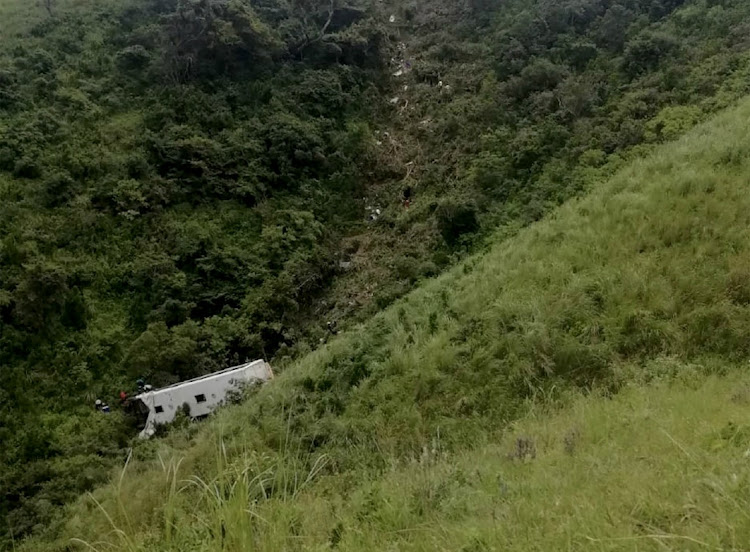 The community of Chebe village in the Eastern Cape which lost more than 20 people in a bus accident in March fears starvation after the Covid-19 national lockdown was extended.
Image: SUPPLIED

Malibongwe Magusheni and his family are down to one meal a day and have only enough mealie meal for two days.

His job as a woodcutter has been constrained by the lockdown and he has nine mouths to feed: himself, his six children and two nephews.

Magusheni's wife, Nomelikhaya, died last month. She was among the 25 dead in the Qolweni bus crash on March 2. The bus, carrying mostly pensioners and social-grant recipients, was travelling from Cebe on the Eastern Cape Wild Coast to Butterworth, 58km away.

If Magusheni's mealie meal runs out, he will need to grind the seeds he hoped to plant later in the year. "I can't have my children starve," he said in his remote Centane village.

Their plight has been made worse by the lockdown. The provincial department of social development said it could not deliver food to the village because its workers had no protective equipment or clothing.

But the department's Gcobani Maswana held out hope. The protective gear had "just arrived", he said, and food parcels would be delivered by Tuesday.

As the government grapples with finalising a plan to feed a growing number of desperately hungry people amid the Covid-19 national lockdown, shelters ...
News
2 years ago

However, Magusheni cannot get forms signed that would entitle him to child support. "The forms need to be signed by the school principal," he said, and the schools are closed.

"Last month we didn't receive our grants. This month-end again we are not going to receive it."

He hopes the schools will open soon, but not just to get his forms signed. "Then the children can at least get something to eat."

Magusheni told the Sunday Times that the last time he saw a government official was at the mass funeral for the bus-crash victims. The official had brought food parcels that have long since run out.

Villagers regard the danger of being infected by the virus as not as great as the shortage of food. Vuyolwethu Mba, 32, whose mother died in the bus crash, said: "We just do not know where, when and how we going to get our next meal."

We only feed him maize porridge and mashed potatoes. The others only eat once a day.

Councillors and community leaders are worried about what will happen if scores of families don't get food promised by the South African Social Security Agency (Sassa) or from the department of social development.

Chief Phathuxolo Tyali, a local traditional leader, said that with many people losing incomes during the lockdown, communities were becoming increasingly desperate as food begins to run out.

Tyali called on the government to help families start their own gardens.

The department's Maswana said Sassa had set aside R45m for food parcels and R5m from the department of social development.

"We have also applied for more funding from the provincial treasury, and are waiting for a response," he said.

Sassa spokesperson Luzuko Qina said people with no income would receive food parcels. Sassa would screen applicants to "identify those most in need of assistance".

Sassa has processed applications for benefits from a crash disaster fund for all 25 families who had lost loved ones.

Qina said Sassa was committed to providing food parcels for three months and would extend this to six months subject to a social worker's assessment.

Transport minister Fikile Mbalula said an investigation had found "human error" to have caused the crash, in which the driver also died. The bus had no mechanical defects but did have an expired licence disc.

She said her mother had been the one who put food on the family table.

"We cannot even access my two young brothers' child-support grants," Mba said. Her brothers are seven and 11 years old. As she spoke, tears ran down her face.

Ntombekhaya Komani, 32, also of Centane village, is another who has been thrust into the role of family caregiver after her mother died in the crash. She now looks after four younger siblings, who are between the ages of eight and 14.

She said the food she had for the five of them would not last beyond a week.

Their child support grants have also been stopped. All they have to exist on is a grant for her 16-month-old son.

"We only feed him maize porridge and mashed potatoes. The others only eat once a day. I just can't wait for schools to reopen so they can eat there," Komani said.

She said she had been told to make an application for child support when schools reopen.

"An appeal is made to everyone who might know of someone in dire need of assistance of social relief of distress to not hesitate but approach Sassa ...
News
2 years ago

Food aid to the Eastern Cape is under the spotlight after government figures showed the department would be able to feed only a fraction of the ...
News
2 years ago