Masks on in public and everyone under curfew at night

the stringent laws that restrict the movement of private citizens remain, with only a few concessions that will be welcomed by citizens cooped up at home.
Image: AFP

The economy was the biggest winner in the government's relaxed Covid-19 regulations announced yesterday, as more than 1.5-million workers are expected to return to their jobs next week under the level four lockdown that begins on Friday.

The government appears to have heeded appeals from business to open the economy after 30 days of lockdown, with most sectors expected to open their doors for the first time since the national lockdown was implemented on March 27.

However, the stringent laws that restrict the movement of private citizens remain, with only a few concessions that will be welcomed by citizens cooped up at home.

Although South Africans will be allowed to buy items that they have not been able to for the past month - including cellphones and computers, warm clothes and cigarettes - and order hot food for delivery, the government has introduced a curfew to restrict the movement of individuals between 8pm and 5am.

House visits, gatherings and movement between provinces remain criminal offences. It will also be compulsory for citizens to wear a cloth face mask in public.

Yesterday, co-operative governance minister Nkosazana Dlamini-Zuma and trade & industry minister Ebrahim Patel announced that 40% of the workforce is expected to gradually return to work from next week to rescue an economy said to have lost between R14bn and R20bn a day since last month.

Patel said moving to reopen the economy "has been a difficult and complex process and a hard balancing act".

Some municipalities want part of the R20bn Covid-19 relief fund to help them deliver basic services.
News
1 year ago

Dlamini-Zuma warned that even though the virus is under control for now, SA could go back to level five if "things deteriorate".

The easing of restrictions was widely welcomed by business and cautiously by trade unions, but questions were raised by both about the lifting of the cigarette sales ban.

Business Unity SA CEO Cas Coovadia said although it was yet to formulate an official position, Busa welcomed the reopening of businesses. "At first glance we welcome further opening of businesses but the important thing obviously is to maintain the health protocols in place and be guided by the department of health."

Black Business Council president Sandile Zungu welcomed the phased reopening of the economy, saying the proposed return for some sectors provides an opportunity for business to shoulder some of the burden of Covid screening and testing. 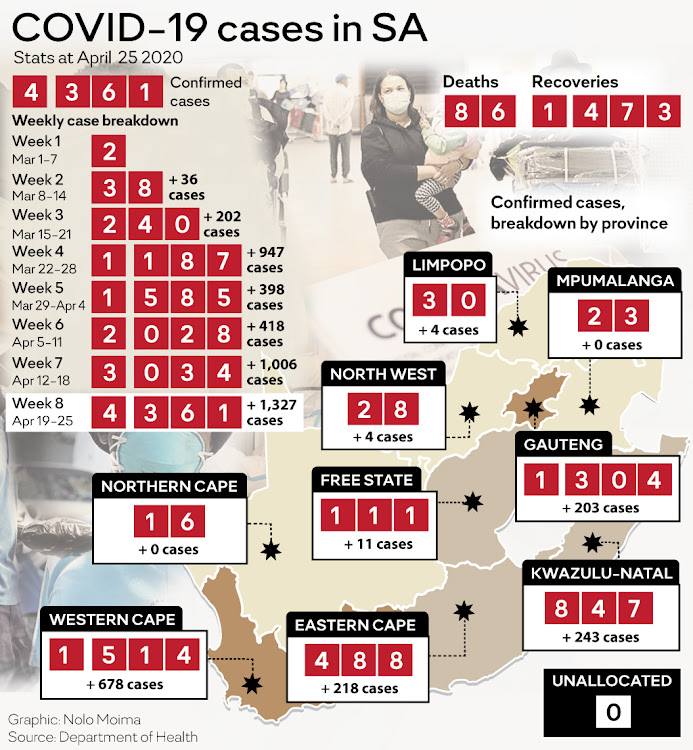 "What we like is that the state is shifting some of the responsibilities, in a systematic way, towards the private sector. The private sector, when they get back to work, must have all those health regulations, which include sanitisation and, more importantly, testing and screening. It will alleviate the burden on the state and shift it to the private sector. We would rather be at work but take the burden of ensuring our employees are healthy. If a place of work is contaminated, that place will be forced to shut down anyway."

However, Zungu said he was "dumbfounded" by the government's decision to lift the ban on cigarette sales. "It undermines the whole thesis around the linkage between cigarettes and the compromise of the lungs, and the commercial aspects don't make much sense, honestly. We will be seeking clarity from the respective ministers but we are not happy with what is coming out at this stage on that particular matter," he said.

The secretary-general of the South African Federation of Trade Unions, Zwelinzima Vavi, said the easing of the lockdown will help salvage a battered economy. But he suggested that some of the government's decisions are irrational. "For example, all along we were told that smoking and coronavirus is like mixing water and oil, those things don't mix. You don't get your people to smoke when the coronavirus is an attack on your respiratory system," he said.

Trade union federation Cosatu's representative at the National Economic Development and Labour Council, Matthews Parks, told the Sunday Times that the return to work will have to be preceded by the adoption of a health and safety plan.

The plan must "cover the whole spectrum: transport as a starter, health and safety at the workplace, social distancing, protection for clients coming in, a shift system where possible, and measures for the employer to enable work and study from home to ease the burden on the transport system. If you want to go back to work, show us the health and safety plan."

Parks said the reopening of the economy must come with creative thinking for the transport industry particularly, to preserve lives. "We were told that the virus can live on a coin for six hours, so what does that mean for the taxi environment? We need a conversation around digitalising the cash economy for the whole transport industry."

The taxi industry said it would negotiate to increase its operating hours to cater for an increased number of passengers. Nkululeko Buthelezi of the South African National Taxi Council said taxi operators are happy with the 70% passenger limit.

He said the taxi industry had lost an estimated R5bn in the past four weeks.

There are some concessions the government suggested which will allow workers who travelled home for the lockdown period to travel across provinces with a permit. 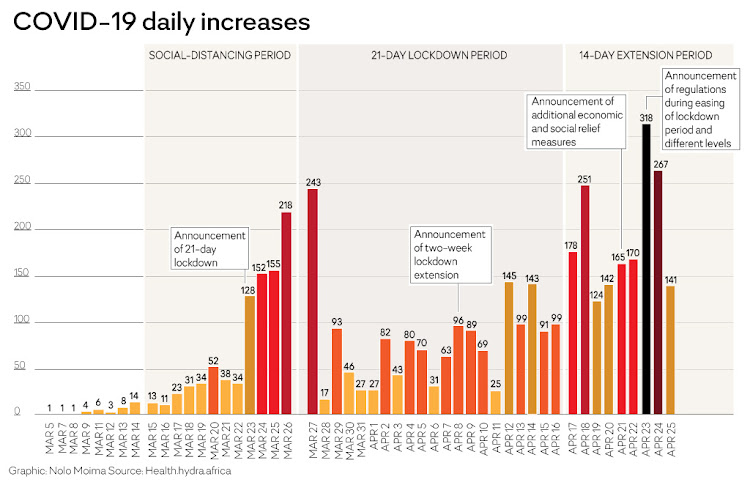 Patel said the government took four factors into account when deciding which sectors of the economy could reopen.

"The first thing we looked at is the risk of transmission of the virus, the spread of the infection that is posed by a sector and a workplace and also the number of people who have to travel to work," he said.

"The second factor we looked at was the expected impact on the sector of a continued full lockdown. How it affects the vulnerability of the sector and the economic impact.

"The third factor was the contribution and the economic linkage of every sector to the broader economy." Patel said they took into account factors like the contribution to the GDP, the number of jobs, the multiplier effect of that sector on that economy, export earnings, supply chain linkages - "and we looked at industrial policy goals".

Patel said they also looked at the promotion of community wellbeing in deciding which sectors of the economy reopen, and noted that they considered both the numbers - quantitative data - as well as making a judgment call in deciding who gets to go back to work.

A draft framework published yesterday outlined all the sectors that will be allowed to work under level four restrictions as well as the measures needed to be put in place.

For now, broad ideas of what the government plans to enforce from next Friday have been made public, but they are yet to work out the fine print.

Minerals Council SA spokesperson Charmane Russell said that mines have long grappled with issues such as TB and HIV among workers, and the industry has over many years refined its overall code of practice and standard operating procedures - and these can be adapted for other industries.

"One advantage mining companies had was the ability to connect with all their employees via apps and WhatsApp. Mines have everyone's phone numbers and contact information, which is important for contact tracing," said Russell.

The industry had also benefited from implementing its plans back in February, which have paid off in the low number of confirmed Covid-19 cases, which stood at nine on Friday.

Starting in February, mines also embarked on a big flu vaccination drive. The motivation was that if people do get sick, it is important to know the cause. "You don't want to confuse things - you want to know what you're dealing with," said Russell.

The sector is continuing with industry-wide screening programmes and education covering prevention, hygiene and social distancing.

Finally, mines have the ability to isolate and support affected workers and have identified facilities for quarantine.

Now that the Covid-19 national command council has outlined what lockdown level 4 means, South Africans are expected to adhere to the new regulations.
Opinion & Analysis
1 year ago