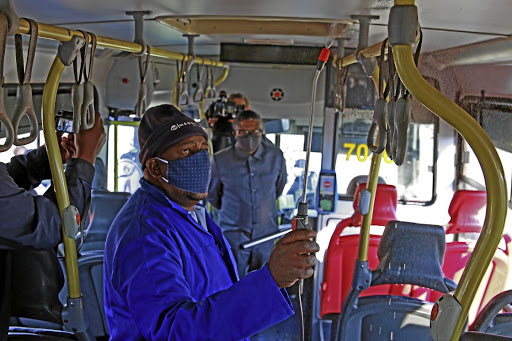 Shadrack Mphailane shows transport minister Fikile Mbalula how he disinfects a Rea Vaya bus in Johannesburg. The minister, who was on a tour of public transport in the city, said he was satisfied with the measures taken by the bus service to prevent the spread of the coronavirus among passengers.
Image: Thapelo Morebudi

Labour unions, taxi associations and organised business have called on the government to consider staggering working hours during level 3 of the lockdown to prevent congestion - and increased risk - at public transport depots.

This is in the wake of the government's decision to relax restrictions, allowing hundreds of thousands to return to work as sectors of the economy resume operations. Most South African workers rely on trains, taxis and buses to get to work.

Tony Ehrenreich, a labour convener at Nedlac's trade and industry chamber, said public transport, which plays a central role in getting people to work, has major weaknesses.

"Trains are dysfunctional and as a result people have moved to taxis and buses. As labour we have made proposals for a staggered approach so that industries such as retail, schools and manufacturing start their day at different times so that they don't find themselves queuing at the same time for very limited public transport.

"This will significantly reduce the amount of congestion," he said.

Ehrenreich said social distancing, sanitising and the wearing of face masks were not enough.

"If we don't implement peak spread, we will have a large number of people contract the coronavirus. You have to get all modes of transport working well in order to have a chance of arresting the spread of the virus."

Nkululeko Buthelezi, a spokesperson for the SA National Taxi Council, said the association supported the call to spread the times during which workers started their day to prevent overcrowding in taxis and at bus terminals. He said that from June 1, all passengers would be screened when they arrived at taxi ranks. 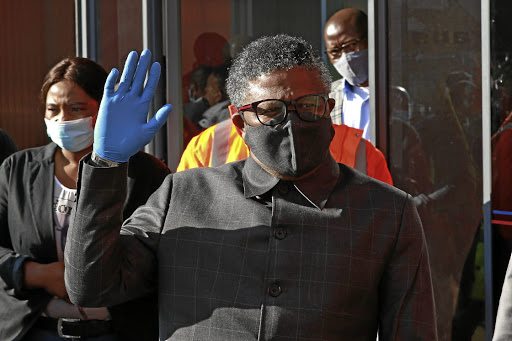 Mbalula at a bus depot in Meadowlands West, Soweto. The minister said his department was working towards introducing sanitising booths at most taxi ranks.
Image: Thapelo Morebudi

"We will also take their details so that we are able to track and trace them should it be necessary. We want to know who was in what taxi and where they were going. We will also introduce taxi booths where passengers will be sanitised as they walk through. The intention is that all taxi ranks should have them, but for now we are starting with the major taxi ranks."

It will be mandatory for queue marshals and taxi drivers to wear face shields and carry sanitisers all the time, he said. Taxi associations will employ safety officers to enforce compliance at taxi ranks.

"We understand that the system is constrained. Demand has exceeded supply. People who should work from home should do so," said Kingston.

He agreed with the idea of introducing staggered working hours.

"There will be an increased need for sanitising people and vehicles. The costs will have to be borne by either employers or commuters. Operators will have to absorb some of the costs. All these issues are on the table."

Yvonne Dick, chair of the pressure group United Commuters Voice, said she was concerned that trains would likely not be operational when the schools reopened on June 1.

Dick said she was concerned about pupils in the Western Cape from Worcester, Malmesbury, Strand, Wellington, Somerset West, Paarl and other outlying areas who attend schools and colleges in Bellville and Cape Town.

On Thursday, transport minister Fikile Mbalula, while inspecting the Rea Vaya bus depot in Soweto, told the Sunday Times that he was happy with the health measures the industry was observing.

Nelson Rikhotso, CEO of Litsamaiso, the company operating Rea Vaya, said it now had to wash all buses twice a day.

"In the normal course of business we wash them three times a week," he said.

Mbalula, who refused to comment on whether the Passenger Rail Agency (Prasa) would resume operations in level 3, said his department was working towards introducing sanitising booths at most taxi ranks. The booths disinfect passengers as they pass through them.

"It receives much attention from us because that is where people interact en masse."

Matlakala Motloung of Putco said the company would observe all the government's regulations, including disinfecting all buses, social distancing by limiting capacity and supplying onboard sanitisers for all passengers.

Back to work: 'It feels like I have to choose if my family will have food or get corona'

As thousands of workers returned to work on Monday, there was increased traffic on several roads in Soweto, with measures put in place to manage ...
News
2 years ago

Taxis to operate for 8 hours a day during lockdown: Mbalula

You will only be able to use public transport for eight hours a day to get essential items such as food and medicine once the national lockdown kicks ...
News
2 years ago