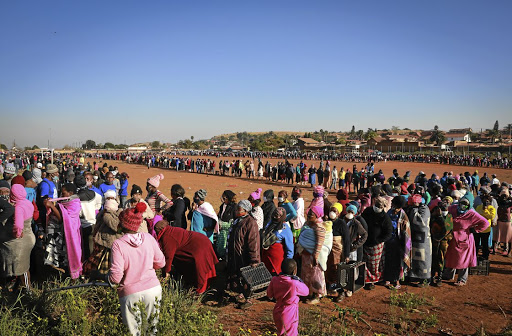 It is becoming clear the Solidarity Fund's food parcel distribution programme is no longer sustainable, with a feeding strategy rethink needed as growing queues of hungry people become increasingly at risk to Covid-19 exposure.

"We will look at facilitating small-scale farming programmes and e-voucher systems to empower families," she said.

The fund was announced on March 23 to augment the country's response to Covid-19, and has so far raised R2.6bn.

Nqweni said that while R900m had been for the purchase of personal protective equipment for health-care workers, R120m had been spent on supporting 300,000 vulnerable families with food.

"Of the families supported, 58,000 were identified with the help of the department of social development (DSD). The rest were supported through relief organisations."

But she said current food-parcel systems were unsustainable.

If the lockdown bickering and sniping rages on, all our efforts so far will be undone

"We cannot perpetuate a society where we are always benefactors of handouts. We need to activate communities to do things for themselves. We are in conversation with stakeholders to say while the fund will not be there forever, we do want to leave a legacy around sustainable food deliveries.

"We are now looking at facilitating small-scale farming and seed planting programmes, which can sustain people in the long term, and
e-voucher systems.
E-vouchers empower families by giving them the choice to decide what they need in terms of food. It also brings money back into communities at a grassroots level."

In a parliamentary social development portfolio committee meeting on Thursday, the DSD's deputy director-general, Peter Netshipale, said that 720,000 households had received food parcels, including those to 300,000 families from the Solidarity Fund.

As the government battles to meet demand, concerns about red tape hampering food distribution, and whether it is sufficient to help desperate families, have been raised by the South African Human Rights Commission (SAHRC) and civil rights bodies.

A queue snaked around the Makhaza sports ground in Saulsville, Pretoria, through to the main road on Thursday morning as hundreds of people from ...
News
1 year ago

While Gauteng has SA's highest number of households receiving food parcels, the provincial government requires relief organisations to obtain permission before food can be distributed. It can take up to 48 hours to secure permission, claim NGOs, which say provincial governments are increasingly introducing draconian regulations.

The Gauteng provincial government requires all food parcels to be inspected by DSD officials, with NGOs registering all their daily feeding plans with security forces regardless of the numbers fed.

Neeshan Balton of the Ahmed Kathrada Foundation, which this week met Gauteng DSD officials, said the biggest problem is the lack of consultation by the government with relief organisations.

On Thursday, the SAHRC slammed the government's apparent planned move to limit NGOs distributing food to the poor.

"While we understood why government wants a co-ordinated approach to protecting people's health, people cannot be stopped from assisting their fellow citizens," he said.

However, social development minister Lindiwe Zulu on Thursday told a parliamentary portfolio committee that while it was the department's plan to work with relief organisations, they had to take health protocols into account. Zulu, revealing that the department had fed 2-million people with 670,000 food parcels this week, cautioned against food becoming a political weapon.

A state security source told the Sunday Times difficulties in getting food was creating an explosive situation. On Thursday, soldiers had to rescue Gauteng DSD officials after a brawl at a food handout in Rustervaal, Vereeniging, after different groups fought to take over the distribution from DSD officials.

Vishwas Satga of the South African Food Sovereignty Campaign said a national food crisis forum was being established to deal with confusion created by the government over distribution regulations. "While mindful about not undermining public health efforts, we believe there's been over-regulation on how food is distributed. Current regulations criminalise acts of generosity."

'There's a Robin Hood in all of us': SA's badass bikers ride to the rescue in the face of Covid-19

The Crusaders, one of the biggest motorcycle clubs in SA, is delivering food parcels to hungry communities
Lifestyle
1 year ago