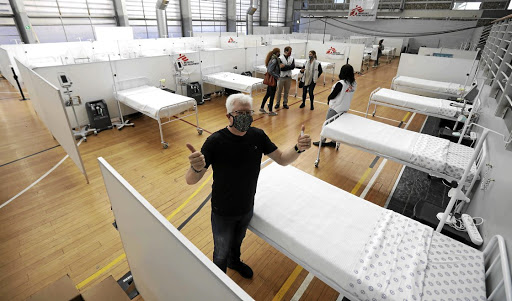 As Covid-19 deaths in the Western Cape reached 472 yesterday, the province has recorded more than three-quarters of SA's fatalities.

Researchers say high levels of hypertension and diabetes in townships could be to blame. Other provinces with the same health issues might follow suit, but it's too soon to say.

The mortality rate for hypertensive disease among women in Khayelitsha, for example, "is more than three times the average for Cape Town as a whole", said Warren Smit, a researcher with the African Centre for Cities at the University of Cape Town.

With 2,511 Covid-19 cases, the biggest township in Cape Town recorded a per capita infection rate of about 626 per 100,000 this week - exceeded only by the adjacent sub-district that includes Delft, Gugulethu and Nyanga.

The Western Cape health department does not list localities for coronavirus deaths, but professor Rene English, a public health expert at the University of Stellenbosch, said "it is reasonable to expect" there would be a correlation with areas that have a high prevalence of comorbidities.

"Studies have shown that those more likely to develop severe disease when infected with Covid-19 are older patients and those with hypertension, diabetes mellitus, coronary artery disease, respiratory disease and obesity," English said.

Smit said Khayelitsha had the worst health indicators in Cape Town. "The mortality rates for stroke, hypertensive disease and diabetes mellitus are particularly high compared to the rest of Cape Town."

The rate at which the disease has spread in Cape Town has forced modellers to tear up their prediction of 5,500 deaths in the province by the end of November, and they are now forecasting up to 9,300.

Khayelitsha has the "largest concentration of poverty in the city", according to Smit and his fellow researchers in a paper on health conditions in the township.

More than half the township's 401,000 residents live in informal dwellings and the 42% unemployment rate means many cannot afford to eat properly.

"For most households, getting sufficient, and healthy food to eat is a constant struggle," said Smit, adding that this fuelled non-communicable diseases.

Added to this was an environment that made physical activity difficult. The few recreational facilities were "badly maintained and considered dangerous to use", and using streets and other public spaces for walking "is greatly constrained by fear of crime and violence".

Khayelitsha's Covid-19 field hospital, which has 68 beds on the basketball and netball courts of a community centre, is ready to accept its first patients. They will be cared for by Doctors Without Borders medical staff.

Western Cape health department head Dr Keith Cloete said this week the province wanted to bring in more nurses and needed to add another 1,600 beds to the 1,400 that had already been added.

Covid-19 infections in the Western Cape moved inexorably towards 20,000 on Saturday, and deaths increased to 472.
News
1 year ago

Thirty-seven staff at 32 schools in the Western Cape have tested positivie for Covid-19, education MEC Debbie Schäfer said on Friday.
News
1 year ago

There has been a backlog in the testing of samples for Covid-19 by public laboratories in the past few weeks, the National Institute for Communicable ...
News
1 year ago