Mother strapped so her kids are forced to scourge for food 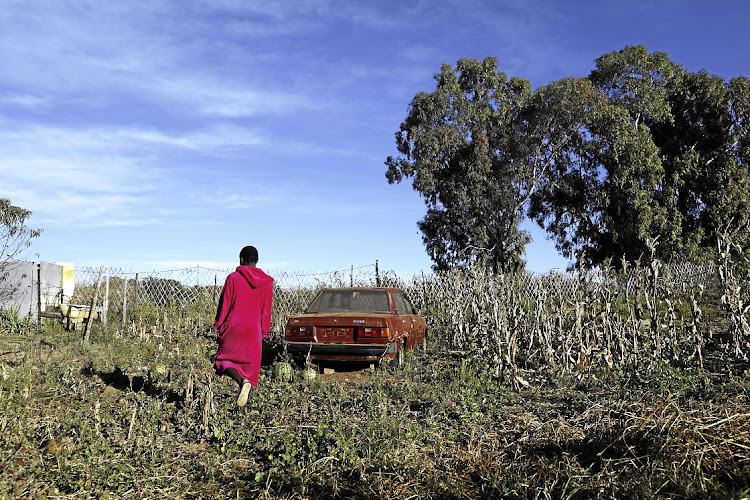 Richard (not his real name ), poses for a photograph, at home in Vlakfontein, south of Johannesburg. He has had trouble getting a steady supply of food during the lockdown, which is due to Covid-19. Mashudu Nemusunda, from The Teddy Bear Clinic has been involved in helping some members of the community.
Image: ALON SKUY

For eight weeks, three siblings in Vlakfontein, south of Johannesburg, survived on food scraps from neighbours and cabbages grown next to their shack.

The children, aged between 10 and 17, were found by social workers last week while checking on poor families in the area.

“They were starving,” said Mashudu Nemusunda, a clinical social auxiliary worker at the Teddy Bear Clinic for Abused Children.

“Their eyes were sunken. For days they would eat nothing.”

Their situation is not unique. Experts say cases of hunger and malnutrition have increased during the lockdown. The children’s mother has been trapped by the lockdown 600km away in a village outside Empangeni, KwaZulu-Natal, for the past eight weeks — first by the travel ban, then because she ran out of money. 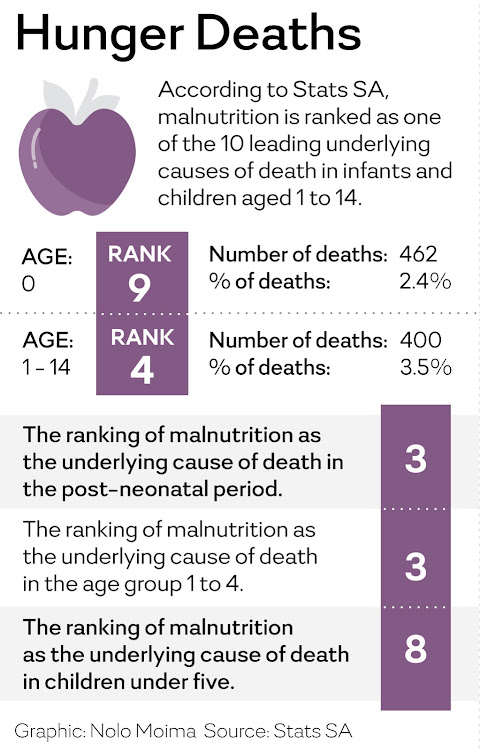 With no money, his neighbours’ own food security stresses rising, and a barren vegetable garden, he walked nearly 15km two weeks ago to take his brother and sister to his aunt’s shack, where she lives with her four young children.

“I had to take them. I couldn’t grow any more food. The neighbours have no more food for us.” The children are now being provided with food by the NGO.

Meanwhile, in Mpumalanga, cases of hunger and malnutrition among children have increased dramatically, according to André Hattingh of Pediatric Care Africa.

“Before lockdown we were helping 350 kids a month with food. Now we are assisting at least 2,000 children a month.”

He said that before the lockdown the organisation was seeing about 25 malnourished children a month, but that number had jumped to 200 in lockdown.

“The levels of malnourishment (sic) and hunger have spiked. It’s truly terrifying. There was always hunger but the lockdown has multiplied it. It’s now a thousand times worse.”

Shaheda Omar, director of the Teddy Bear Clinic, said malnutrition and hunger numbers were going through the roof across SA under the lockdown.

“Daily we receive calls for help for food. Parents and children are starving.

“The plea for food has never been like this before the lockdown. Every day we get at least 15 calls for food from across SA. In the past we would get maybe two calls for food a week.”

A nurse at the Red Cross War Memorial Children’s Hospital in Cape Town, which sees patients from across SA, said the lockdown had exacerbated the cases and levels of malnutrition.

“What we are seeing is a lot worse. In the past we would see cases where children had the early onset of malnourishment (sic). Now the malnourishment (sic) is heavily exacerbated,” said the nurse, who did not want to be named because she is not authorised to speak to the media.

“On a daily basis we receive children and their parents who are malnourished, especially those who come from the rural provinces like Limpopo and the Eastern Cape. Of the 60 to 100 children we see in the outpatients department daily, at least 30 are battling malnourishment (sic) and hunger. It’s the same with parents.”

• 14.4m - The number of South Africans said to be suffering from food poverty

In April, surveys by the University of Johannesburg and the Human Science Research Council (HSRC) pointed to growing levels of hunger under the lockdown, with up to 55% of informal settlement and township residents having no money to buy food.

The surveys followed a report in March by Stats SA listing malnutrition as the fourth leading underlying natural cause of death for children.

“We are likely to see an increase in the prevalence of malnutrition during the pandemic,” said Van Tonder.

The SA Civil Society for Women’s, Adolescents’ & Children’s Health — a coalition of various civil society organisations — said that while it was heartening that food parcels were being handed out, not all these parcels were nutritionally optimal.

“Many of the household food packs have, unfortunately, not been tailored for the nutritional needs of children,” said the coalition’s chair, Precious Robinson.

“Covid-19 is a threat to health and a major global disrupter.

“However, hunger has shown itself to be a more tangible threat. “We need to ensure sufficient and sustainable food supplies are made available to vulnerable communities.”

Low-income families have increased their spending on food by more than 30% since March when the national Covid-19 lockdown began.
News
1 year ago

SA's most vulnerable people are likely to be the biggest losers in a standoff between the government and NGOs over the distribution of food parcels.
News
1 year ago