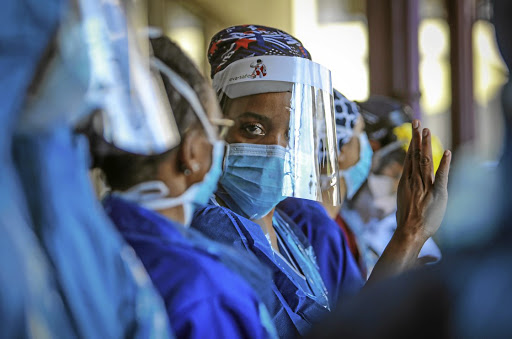 When SA's first Covid-19 case was detected, a group of Cape Town nurses were told by their bosses that as long as they followed protection procedures, they would be fine.

Two months later, one of the nurses tested positive - and she is now among almost 1,200 infected health workers in SA's worst-affected province.

"We experienced a shortage of personal protective equipment [PPE] early on in the pandemic. Managers became agitated if you dared ask about lack of PPE," said the emergency nurse, who works at a public hospital. She did not want to be named because she is not authorised to speak to the media.

"We were told that a surgical mask and gloves are enough to give us protection despite dealing with critical patients who are sometimes gasping for air."

Now the nurse, who is in self-isolation, is worried about going back to work. "I'm scared that I may catch the virus again. If I have to work at an emergency unit and be the first to see these sick patients I feel that going there without proper PPE is like going on a heist… you don't know whether you are going to come back alive or not."

A porter at one of Cape Town's busiest hospitals recently went back to work after testing positive for Covid-19 and said the new guideline of not being retested before resuming duties made her "paranoid".

The porter said: "My symptoms are not completely gone, I still get intense headaches and occasional loss of smell or taste, but I had to come back because the 14 days of quarantine was up. I don't even know if I'm clear of the virus."

Due to a shortage of test kits, SA has scrapped follow-up tests and adopted clinical criteria for disease resolution.

The mother of two said she had been distressed at seeing other Covid-19 patients die and colleagues' health deteriorate. "There is no psychological support at all. The only phone call I got from my manager while I was away was that my 14 days is up and I must come back to work."

A nurse at an Eastern Cape provincial hospital said despite working in a burns unit, where the "risk of infection is high, the only PPE that we were given is surgical masks, gloves and plastic aprons".

She added: "To avoid working in our uniform we had to buy theatre scrubs from our own pocket so that we can keep our uniform germ-free when we go home. We've been told that there is no PPE and we are expected to come to work as we made a pledge of serving the nation.

"Our colleagues die all the time. You don't know whether you will be next. Due to the anxiety of going to work my doctor told me this week that my blood pressure is up even though I'm not hypertensive."

My symptoms are not completely gone, I still get intense headaches and occasional loss of smell or taste, but I had to come back because the 14 days of quarantine was up. I don't even know if I'm clear of the virus.

Porter in a Cape Town hospital

Another nurse who works for an Eastern Cape district hospital said that even though she has diabetes she is working with Covid-19 patients.

"The guidelines that health-care workers over the age of 60 and those with comorbidities are not supposed to be on the frontline are just on paper," she said. "In reality everyone is a frontline worker, particularly at facilities where there are staff shortages."

Western Cape health spokesperson Mark van der Heever said PPE was allocated according to the risk profile of each workspace, PPE stocks had doubled and testing of health-care workers was being prioritised.

"This has been a narrative that has been used by some since the outbreak of Covid-19 in the province.

"These claims prompted us to investigate and we found that health institutions had sufficient PPE."

Kupelo said some protests had been at hospitals where there were no Covid-19 cases. And at Livingstone Hospital in Port Elizabeth, where "scores" of Covid-19 patients were being treated, health workers had not been infected.

In the race to ensure SA's hospitals are prepped for the expected Covid-19 infection surge, the Eastern Cape has turned to unusual building materials ...
News
1 year ago

To date, six front-line hospital workers have died in the Western Cape from Covid-19.
News
1 year ago