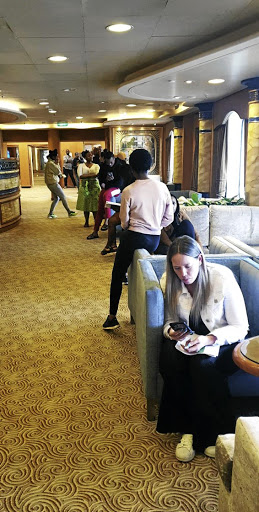 South Africans on board the Emerald Princess cruise liner, lying off Rotterdam in the Netherlands, queue for the visas they need to be repatriated to SA.
Image: Supplied

South Africans who are part of a cruise ship's crew had their hopes of returning home dashed on Friday when a repatriation flight was cancelled.

The crew are said to be near their emotional limit.

Several suicides on five different cruise ships have been reported by crews marooned at sea across the globe.

South African Natasha Micha, who worked as a nurse on a cruise ship in South America, said "we were lucky" not to have had any suicides on board.

On Friday she and her colleagues were waiting at Amsterdam's Schiphol Airport for an Air Belgium repatriation flight that was supposed to end three months at sea for them and 249 South African crew members from various cruise ships. But they received news the flight was cancelled after it could not get landing clearance from the South African government.

Other South African crew members stuck on the Emerald Princess, which was lying in port in the Dutch city of Rotterdam on Friday, said they had been told by SA's high commission in the Netherlands not to go to the airport for their flight because it would not happen.

They claimed the South African government had denied the Air Belgium flight permission to land.

The department of international relations (Dirco) said on Friday the decision not to allow the flight to land in SA had been made by the National Joint Operational and Intelligence Structure (NatJOINTS).

"There are a number of flights that were not approved. All of those flights have been asked to hold so NatJOINTS can make sure they meet all of the requirements to fly to South Africa," Dirco spokesperson Lunga Ngqengelele said.

"I understand that there was a bit of a misunderstanding with regards to some of the flights. We are resolving those issues, because we just want to make sure that all the flights coming to South Africa meet the requirements in terms of the regulations we have so that the spread of the coronavirus is contained as much as possible.

"We are trying to assist them so they can come back home. We are trying to make sure whichever flight comes back to South Africa, all the preparations are made so that those people can be quarantined."

Despite her critical-care experience in South African hospitals, Micha's voyage across the world's oceans since February has pushed her to new levels of anxiety.

Six people died of Covid-19 after an outbreak on a cruise liner she served on in South America,and she was not spared infection.

"I had a day or two where I was pretty sick, and that's when they decided I need to go to hospital. Luckily I bounced back and was able to go to work after being quarantined," she said.

On Thursday she flew from the Caribbean island of Curaçao in the hopes of joining her countrymen in getting home.

While on the ship, she had suffered panic attacks over fears that her trip home would be cancelled, which it later was.

"It's so devastating," she said.

- 7100 South African have been repatriated to date by air

"Nobody signs up for this. I just want to be with my family again. My mother is not well. I haven't seen my husband in months. It's been horrific."

Her next step is to attempt to join the 242 South Africans stuck on the Emerald Princess. But the crew members there are in no better shape.

Senior ship physician Dr Jennifer Krüger recalled how much the crew had endured since March after they were denied entry to every country they reached. Chemotherapy, chronic medication and oxygen were shared between 11 ships in mid-ocean, she said. Treacherous seas had resulted in some injuries.

The Princess Cruises company had made every attempt to take care of crew members and get them home, said Krüger. But their attempts were scuppered by various governments and in some cases ports only opened to them when citizens of those countries had died on board.

"We have been at sea for three months while massive Covid-19 outbreaks took place on board. We lost four people on board to the coronavirus," said Krüger.

DA MP and shadow minister for international relations Darren Bergman said he had received calls from people threatening to commit suicide after the flight cancellation.

"I have parents crying on the phone. I have people threatening suicide if they get taken back to the ship," he said.

The government has repatriated more than 5,000 South Africans from overseas since the start of the Covid-19 lockdown.
Politics
2 years ago
Coronavirus by Tiso Blackstar Group - Infogram

Naledi Pandor shut down alleged requests from repatriated South Africans who want to be sent back to the countries from which they were repatriated.
News
2 years ago

An SAA staff member died of cancer, not Covid-19, her family said on Tuesday.
News
2 years ago

Thousands repatriated to SA, some ready to return to work abroad as countries reopen: Pandor

International relations and cooperation minister Naledi Pandor says thousands of South Africans have been repatriated since the closure of ...
News
2 years ago

A SA man stranded in Morocco for eight weeks cannot believe that he and other South Africans stuck in three other African countries will finally be ...
News
2 years ago