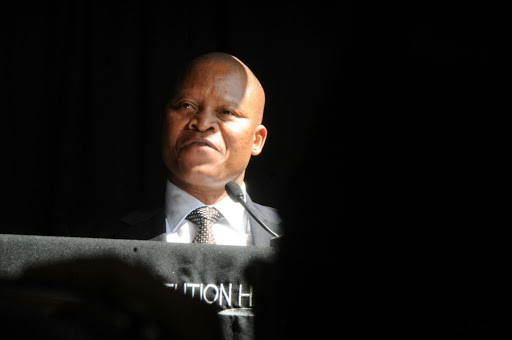 Africa4Palestine said chief justice Mogoeng Mogoeng’s comment was “incompatible with the confidence in and the impartiality of judges”.
Image: VATHISWA RUSELO

Chief justice Mogoeng Mogoeng faces a complaint at the Judicial Service Commission over his comments on Israel.

Africa4Palestine, which lodged the complaint this weekend, accused SA’s senior judge of breaching the judicial code of conduct.

During a discussion hosted by The Jerusalem Post, Mogoeng said he had an obligation as a Christian to love and pray for the peace of Jerusalem. Africa4Palestine said the judge’s comment was “incompatible with the confidence in and the impartiality of judges”.

Among those who helped draft the complaint were lawyers Sheldon Magardie, Ben Winks and Yasin Bham. It accused Mogoeng of placing himself in the “eye of controversy” by appearing in the discussion with SA’s chief rabbi, Warren Goldstein.

The complaint is based on a code which decrees that a judge not become involved in political controversy “unless it is necessary for the discharge of judicial office”.

An independent justice, on the bench and off

It's difficult to avoid the conclusion that the howls of protest directed at chief justice Mogoeng Mogoeng for his comments this week about SA and ...
Opinion & Analysis
2 years ago

It said Mogoeng “expressed, or at least unambiguously implied, the political posture adopted by the government of South Africa in relation to the state of Israel is not right”.

Mogoeng said a disinvestment campaign against Israel was “not right”. Africa4Palestine said Mogoeng acknowledged the political nature regarding Israel during an interview of advocate Michael Do-nen at the Judicial Service Commission.

Africa4Palestine said Mogoeng would have been conflicted in an alleged hate speech matter brought before the Constitutional Court last year involving a former Cosatu leader who called for action against“Zionists ”.

“In light of the strong views Mogoeng expressed during the [Jerusalem Post] webinar, in support of Zionism and in opposition to the boycott, divestment and sanctions campaign [against Israel], Mogoeng should have recused himself,” Africa4Palestine said.

Mogoeng should have recused himself

International relations & co operation minister Naledi Pandor also criticised Mogoeng this week. In a radio interview, Pandor said: “The minute we see positive movement by Israel, we would be the first to reach out, but while Israel continues with its intransigence and the denial of rights to the people of Palestine, rights that the chief justice enjoys, by the way, in SA, and which he didn’t refer to in the alleged comments published by The Jerusalem Post.”

Mogoeng dismissed all Hlophe’s counter complaints against Goliath on the basis that “none of them has merit”.

Mogoeng is investigating the complaints that the two judges had levelled complaints against each other after the Judicial Service Commission ’s conduct committee decided that they should both be the subject of an inquiry, rather than an impeachment tribunal.

On Friday JSC spokesperson Carel Fourie told Sunday Times he had not received complaints around the comments made by Mogoeng. It is understood Africa4Palestine submitted its complaint via e-mail yesterday.

The ANC top brass has charged president Cyril Ramaphosa with speaking to chief justice Mogoeng Mogoeng about his recent comments regarding Israel.
Politics
2 years ago

Chief Justice Mogoeng Mogoeng has received support from an unlikely ally, a leader of a tribe in KwaZulu-Natal.
Politics
2 years ago

The South African Zionist Federation has condemned the ANC and others who criticised chief justice Mogoeng Mogoeng for "endorsing" Israel.
Politics
2 years ago