'Curfew, booze-sale curbs': What to expect from Ramaphosa's address 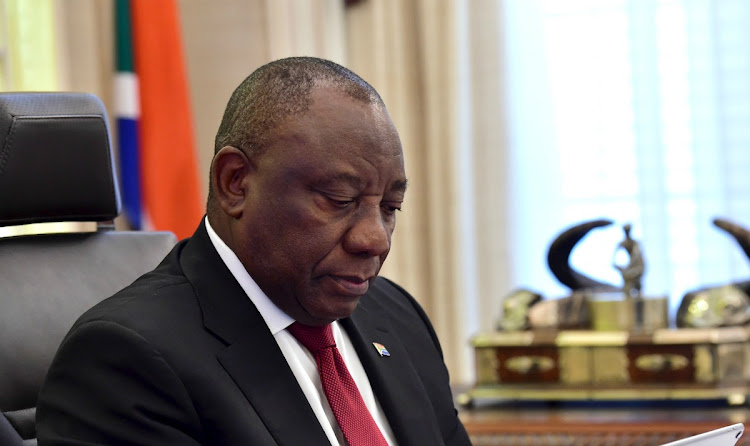 Presidential spokesperson Khusela Diko confirmed that the president will address the nation tonight, but would not say what he is likely to announce.
Image: GCIS/ELMOND JIYANE

A reintroduction of the night-time curfew, tightening regulations on the sale of alcohol, limiting movement between provinces and enforcing a limited load in minibus taxis and other modes of public transport are on the cards as President Cyril Ramaphosa addresses the nation on Sunday night.

His address, the first since June 17 when he announced the move to advanced level 3, comes after a meeting of the National Coronavirus Command Council (NCCC) and the cabinet, and lengthy consultations with the government's scientific advisers.

It also comes amid mounting worry about the pandemic's alarming trajectory in SA, and a growing sense in government circles that existing lockdown regulations are being flouted with impunity by the public.

The NCCC met on Thursday to discuss these and other proposals from the Gauteng provincial government, as it seeks to contain rising numbers that have made the province SA's new epicentre of the virus. The cabinet met on Friday to deliberate further.

But a proposal for an intermittent lockdown where certain parts of a province go into a tighter lockdown while others remain under advanced level 3 - depending on the rate of infections - has been shot down.

Presidential spokesperson Khusela Diko confirmed that the president will address the nation on Sunday night, but would not say what he is likely to announce.

A looming shortage of ICU and general ward beds means severely ill Covid patients - even those with medical aid - may not make it through the door at ...
News
2 years ago

Ramaphosa will be under pressure to accommodate the demands put to him by provincial premiers, who have warned that their health systems are pushed to the limit.

The Covid-19 crisis continues to deepen as infection rates rose at a rapid pace this week, with Gauteng overtaking the Western Cape as SA's epicentre of the killer disease. By Friday night, the national infection rate passed the quarter-of-a-million mark, with 250,687 confirmed cases of Covid-19 reported by health minister Zweli Mkhize. Gauteng now accounts for more than 34% of confirmed coronavirus cases at 87,033, followed by the Western Cape with 76,067 and the Eastern Cape accounting for 46,284 cases.

The Sunday Times understands that the cabinet has sought legal opinion on the best way forward on the request to reintroduce a limit on the movement of people at night, which was fiercely challenged by the DA.

There is also now a request for the sale of alcohol to be regulated further, including a reduction in the hours of sale and the quantities people may purchase. Banning or strictly limiting the movement of people between provinces, and ensuring that taxis comply with the requirement to load only up to 70% of their capacity, are some of the issues to be addressed on Sunday.

At the moment, individuals are allowed to travel between provinces to go to and from school, attend funerals, seek medical attention and to exit quarantine.

"The cabinet and the NCCC felt it's not going to help," said an insider.

A senior official in the Gauteng provincial administration told the Sunday Times that the provincial executive had approached the cabinet with a bag of proposals and requests for extra policing under advanced level 3 lockdown.

"We say at level 3 it appears it's just a free-for-all... there's no longer compliance checks by the police, no roadblocks and all those things. They don't ask you even when travelling at night where you are going.

People are organising parties now, they visit each other as friends, they visit families and relatives. It's like there's no lockdown

"People are organising parties now, they visit each other as friends, they visit families and relatives. It's like there's no lockdown."

There was generally agreement within the cabinet with Gauteng's proposals for tightening the regulations around the sale of alcohol, instead of an outright ban on sales, he said.

Present regulations allow for alcohol to be sold from Monday to Thursday between 9am and 5pm. But since the reintroduction of alcohol sales, there has been an increase in trauma unit admissions at hospitals.

The health department has appointed a special task team to assess the impact of alcohol consumption on a health system that is already under pressure. Director-general Sandile Buthelezi told parliament this week that since the ban on alcohol was lifted, serious problems have emerged, chief among these being the clogging of emergency beds with patients admitted after alcohol-related incidents.

But while Gauteng wants tighter restrictions, the province is not calling for a return to a higher level of the lockdown or closing of the economy further.

"We support the current risk-adjusted strategy, which allows for the economy to reopen. We even emphasised that we are one of those that argued strongly for the reopening of the economy and we are not calling for hard lockdown, we don't want to shut down the economy. As the economic hub of country, we understand the implications of doing that for province and country," the provincial insider said.

Contacted on Saturday, minister in the presidency Jackson Mthembu declined to comment on discussions in the cabinet and the NCCC, saying he can't speak on these issues until the president has addressed the nation.

Gauteng government spokesperson Thabo Masebe said: "We submitted our proposals to the NCCC and we hope that they will communicate their decisions."

Masuku said on Friday that Soweto, the country's biggest township, has the highest number of Covid-19-related deaths and active cases in the province.

Nelson Mandela Bay in the Eastern Cape and the Cape Town metro in the Western Cape are the epicentres in their respective provinces. The Eastern Cape has asked for soldiers to assist at its health facilities, which are battling to cope with admissions.

Poor social distancing, failure to use face masks and other personal protective equipment, and a lack of compliance with other lockdown regulations have been blamed for the Covid-19 surge.

But a reintroduction of a night-time curfew or implementing further restrictions on movement could put the government back on a collision course with some opposition parties. The DA mounted an unsuccessful court challenge against several lockdown regulations. The failed court bid was against, among other things, the night-time curfew that kept citizens at home between 8pm and 5am, the ongoing ban on tobacco products, and the ban on e-commerce and exercise, which have since been lifted.

Gauteng also implored the cabinet to ensure that taxis and other modes of public transport adhere to the regulation of loading at no more than 70% of their capacity. Taxi organisations rebelled against these regulations, complaining that transport minister Fikile Mbalula allowed airplanes to load at full capacity. Negotiations are still under way to get minibus taxis to comply and stop them from ferrying passengers across provinces.

When Nombeka Sithole received a negative Covid-19 test result 10 days ago, her family were relieved.
News
2 years ago

As SA traverses the rough seas of the Covid-19 pandemic, the cracks that have been caused by decades of government neglect, state failure and endemic ...
Opinion & Analysis
2 years ago

Pandemic presents leaders with a moral and ethical dilemma

Leaders have to make decisions during difficult times: this is the burden of responsibility that those who are tasked to lead communities, businesses ...
Opinion & Analysis
2 years ago