Khayelitsha residents out and about during the lockdown. The Cape Town township has seen a drop in infections among health workers, and a decline in hospitalisations and deaths.
Image: Esa Alexander

Khayelitsha was the worst-hit area in SA when Covid-19 community transmission took hold, but less than five months after its first case the country’s second-biggest township is beating the odds.

After watching the Cape Town township record only 164 new transmissions in the week until Friday — compared with 625 in the last week of June — Western Cape premier Alan Winde said the decline was not a result of fewer tests being done as the province targeted the most vulnerable residents for testing.

“We have seen the number continue declining even during the period with the risk-adjusted testing strategy in place,” he said.

Reliable indicators are telling the same story: the township has seen a drop in infections among health workers, a drop in hospitalisations and, most significantly, in deaths.

“Many of our hotspots have developed very different trajectories and we are still working to understand exactly what has caused this,” said Winde.

SA is finally seeing a glimmer of light at the end of the Covid-19 tunnel.
News
1 year ago

“Khayelitsha has shown significant declines, and we have seen declines in infections and hospitalisations in other areas as well, particularly in the metro.”

However, he said, “we are seeing a different picture in some non-metro regions, for example in the Garden Route, where new infections are still showing an increase”.

By Friday, Khayelitsha had seen a total of 7,873 cases with 7,196 recoveries (91%). Active cases are now less than half the number they reached at the peak on June 29.

It is too early to say exactly why the sharp decline has occurred, but Winde said the “hotspot containment strategy” was applied in Khayelitsha.

The number of deaths between July 31 and August 6

This included partnerships with Médecins Sans Frontières (which set up a field hospital) and NGOs and neighbourhood watches, which helped to spread awareness about social distancing, masks and hand washing.

The strategy also included “focusing on risk groups” such as the elderly and those with underlying conditions, as well as a weekly radio show on Zibonele FM on prevention methods and the use of facilities.

Despite the positive signs in the statistics, however, the risk of a resurgence is possible. Because of this, said Winde, “we must stick to the principles of social distancing, hand washing and wearing masks”.

Khayelitsha resident Aida Gxowa, 57, said awareness of the virus had grown since the early months, though some residents still ignored protocols. 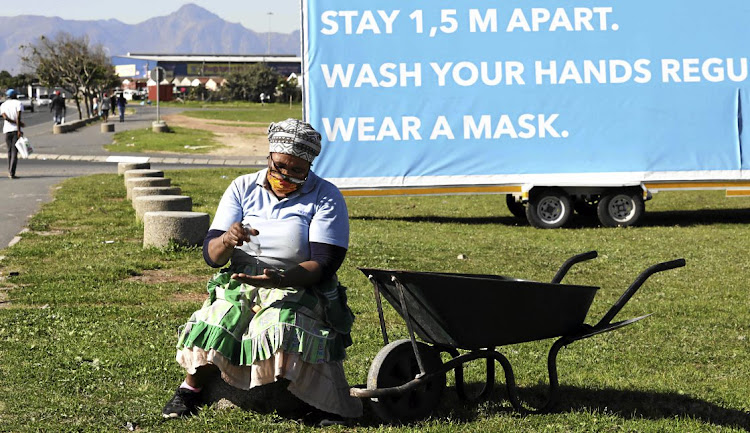 Aida Gxowa in front of an awareness board in Khayelitsha. Residents now have to guard against a resurgence of infections.
Image: Esa Alexander

“Most of the time now, when people go to Khayelitsha Mall, the security will sanitise you before you go in. Now people know coronavirus is alive because we see it kills,” Gxowa said. “The shops also tell us to stand 1.5m apart, and most people don’t just walk around for nothing. They stay at home.”

Professor Sarah Mosoetsa, head of the National Institute for the Humanities & Social Sciences, said research in Khayelitsha and the townships of Alexandra, Diepsloot, Soweto and Umlazi showed how the history of a place came to bear on a crisis like Covid-19. 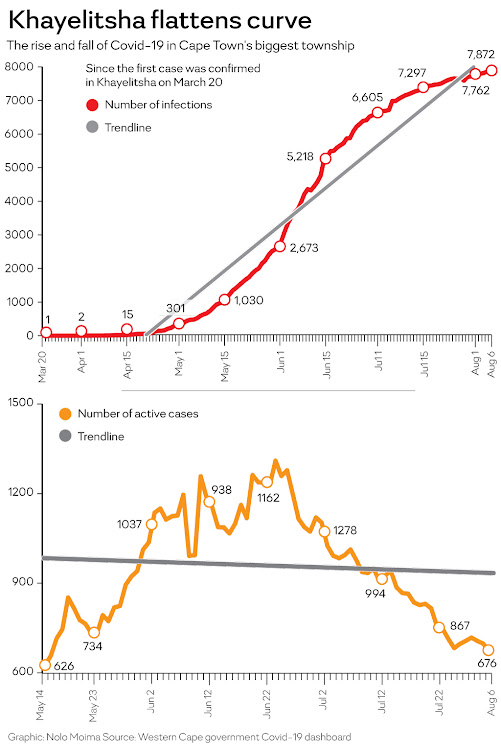 “Townships are very particular localities that need to be understood in context. The virus itself has led to other crises around food insecurity, unemployment, income loss and political issues,” she said.

“When we consider the effects of the disease, we also need to think socioculturally. Townships were not constructed to deal with any crisis at all. They were simply established as labour reserves. What we have found is that the majority of individuals in SA are making daily choices between health risks versus livelihoods.”

Khayelitsha, like other townships, is “embedded in histories”. With a burgeoning population of around half a million, 55% live in informal housing.

For four decades, the area has served as a far-flung working-class settlement from which residents must travel long distances to earn a living. Others work in the informal sector on the township’s network of tarred and dirt roads.

By May, it had quickly become a Covid-19 hotspot and the Western Cape head of health, Keith Cloete, said residents in Khayelitsha providing essential services in retail and other sectors had become vectors before people in other areas.

“The virus had been concentrated in essential services clusters and care homes, and had then travelled back to the geographical areas where workers in those sectors live, areas which are the most vulnerable communities in Cape Town,” he said at the time.

With the sharp decline in infections, residents are reeling from the economic impact but also having to safeguard against a resurgence.

“At least now people wash their hands,” said Gxowa. “Most of the time everybody has their own sanitiser just like me.”

'PODCAST | Crowds are the new contagion​'

SA is finally seeing a glimmer of light at the end of the Covid-19 tunnel.
News
1 year ago

As the pressure on medical facilities drops in the Western Cape, Médecins Sans Frontières (MSF) has begun decommissioning its 60-bed field hospital ...
News
1 year ago

IFP founder and former leader Mangosuthu Buthelezi has become the latest political figure to test positive for the coronavirus.
News
1 year ago