Schools back, but will there be room? 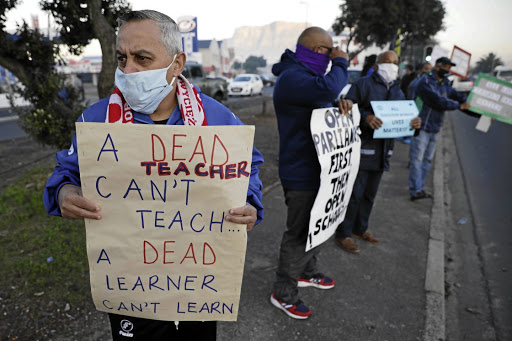 There is also concern that schools will not have enough classroom space for social distancing when other grades return on August 24.

In addition to phasing in grade 7s tomorrow, most former Model C schools will bring back other grades, having been given permission by the provinces.

Western Cape and Northern Cape schools had 70% of matrics returning this week, according to figures supplied to the Sunday Times.

In Mpumalanga 83% of matrics returned and 80% in North West. Despite the Eastern Cape's water and sanitation woes, 94% of grade 12 pupils returned.

In its school readiness report, presented to the Eastern Cape legislature on Thursday, the education department said reports from districts "clearly indicate that grade 12 learners are determined to work hard" during the rest of this year.

Figures presented by Free State officials on Wednesday showed that 77.4% of matrics came to school this week. Only 205 of the 1,151 pupils in the Free State's Xhariep district (Trompsburg) returned after 13 of the 14 schools reported infections.

Up until Monday, 281 pupils and 832 teachers in the Free State had tested positive for the virus. Two pupils and eights teachers have died.

Free State education department spokesperson Howard Ndaba said pupils stayed home because schools were being decontaminated. "It's not like they ... don't want to go to school," he said.

Western Cape education spokesperson Bronagh Hammond said the department was looking at the pupil absentee data and "will follow up with specific schools where attendance may be low".

Lehuma Ntuane, a spokesperson for the Northern Cape education department, said reports from districts indicated that teacher and pupil attendances were "concerning". About 71% of teachers returned.

The biggest problem, according to teachers, will be the return of pupils from eight grades on August 24. The teachers said schools do not have enough classrooms to comply with social distancing.

A teacher at Sedimothole Secondary in Limpopo said the school needed 11 extra classrooms to accommodate all pupils from grades 8-12. The school was given three mobile classrooms last month but the furniture for these was not delivered.

The teacher said the school could bring in matrics on alternate days or alternate weeks if it did not receive furniture and more classrooms.

Gauteng education MEC Panyaza Lesufi said on Friday he was pleased with the turnout of matric pupils in the first week back after a break in ...
News
11 months ago

As schools prepare to welcome back grade 7 pupils next week, the Paediatrician Management Group and the SA Paediatric Association have urged ...
News
11 months ago

A teacher at Freedom Park Secondary in North West said the school would require an extra seven teachers and four classrooms when all grades return.

The school is planning to keep grades 11 and 9 in school for three days of the school week and grades 10 and 8 for the other two days.

The teacher said the school would be forced to ignore social distancing and allow pupils to sit close together if it did not get more classrooms and teachers.

"A teacher who was previously teaching four classes is now teaching eight. They don't rest and are on their feet the whole day," the teacher said.

Mpumalanga education department spokesperson Jasper Zwane said schools would make their own decisions on the timetables and attendances.

Hammond said most Western Cape schools had decided to have grades return on alternating weeks or days, or in shifts.

The matrics, she said, would attend school every day of the week.

Gauteng education MEC Panyaza Lesufi said 76% of matrics were back at school on Wednesday, compared with 56% on Monday.

He said at least 24 of the 622 schools that had grade 12 pupils remained closed because of Covid-19 infections, infrastructure problems or community protests.

'Drama and stress' expected but schools must reopen by August 24: Motshekga

Pupils who spoke to TimesLIVE on Monday said there was additional stress because of losing even more of the school year due to the one-week closure ...
News
1 year ago

Closing schools is right — but let’s take this chance to fix them, too

It has been nine days since President Cyril Ramaphosa announced that schools would be closed for a period of four weeks in a bid to slow the rapidly ...
Opinion & Analysis
1 year ago

The department of basic education has released a revised calendar for the 2020 school year, which will see schools reopening on August 24.
News
1 year ago