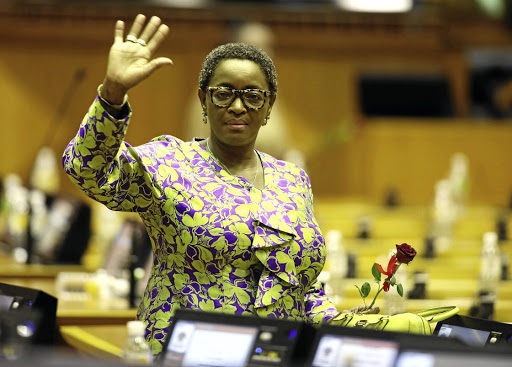 ANCWL president, Bathabile Dlamini said that in the wake of the economic collapse brought about by the pandemic, the ANC seriously needs to rethink the design of the economy and structures of the government that have not been built to accommodate the needs of a democratic SA.
Image: SUPPLIED

ANC Women's League (ANCWL) president Bathabile Dlamini has called on the party to cast the net wider in its investigation of Covid-19-related corruption - and not focus only on the purchase of personal protective equipment (PPE).

In an interview with the Sunday Times, Dlamini said the global pandemic brought with it a number of transactions that the ANC national executive committee needed to look into. This is beyond what has been unearthed with regard to PPE suppliers and their connections to political players.

Cheers all round as Ramaphosa lifts bans, puts SA back on road to recovery

President Cyril Ramaphosa last night swept aside most of the Covid-19 lockdown restrictions in a bold move intended to restart an economy shattered ...
News
1 year ago

"Covid-19 is about sanitisers, PPE, respirators, hospitals that have been built and so on. So why is the focus just on one area, PPE?" said the former minister.

The party's decision to order an internal investigation into Covid-related corruption has been criticised by those who say ANC officials cannot investigate corruption when some of them are implicated in it. This follows reports that secretary-general Ace Magashule's sons and close associates benefited from the emergency procurement of PPE, and that the husband of Khusela Diko, President Cyril Ramaphosa's spokesperson, received PPE contracts in Gauteng.

Dlamini dismissed the criticism, saying she has full confidence in the top six's competence to conduct the audit. "The president said in parliament that if his son is found to be corrupt, he will accompany him to the police station.

"I think if he can do that to his child, it means he can be objective. I have confidence in my leaders, I think they are going to use their objectivity."

Dlamini said that in the wake of the economic collapse brought about by the pandemic, the ANC seriously needs to rethink the design of the economy and structures of the government that have not been built to accommodate the needs of a democratic SA.

"This thing is also about systemic apartheid institutions that were made to benefit a few. If we don't change that structural system we won't get far. Even government systems, we were co-opted into using them, we have not come up with a system that benefits the poor. That is the gist of our problems: we are a capitalist country and we have decided on starting with a mixed economy."

Dlamini warned her male counterparts in the ANC that the party will be in trouble at next year's polls if it continues to use women as voting cattle and excludes them from positions in the organisation. This week the women's league condemned the North West province for what it called the removal of four mayors in the province without providing a reason.

"The ANCWL will be consulting with all its members deployed in councils country-wide to chart a way forward," said Dlamini.

ANC Women's League president Bathabile Dlamini has reiterated the league's opposition to the lifting of the ban on alcohol and cigarettes sales as ...
Politics
1 year ago

The Special Investigating Unit (SIU), which has been given sweeping powers to investigate Covid-19 procurement irregularities, has itself been ...
News
1 year ago