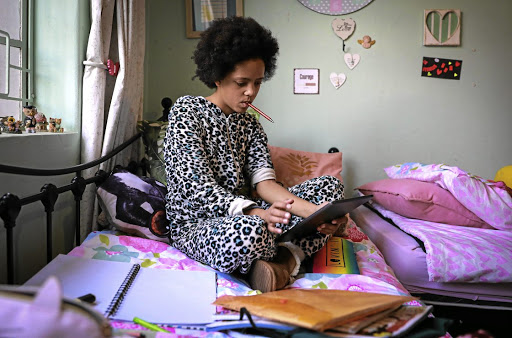 Grade 8 pupil Kia van Oerle on her bed in her pyjamas listening to a teacher's lesson on her iPad. Some schools have turned to virtual teaching as the country battles to contain the spread of Covid-19.
Image: Sebabatso Mosamo

The department of basic education has advised teachers not to work at home in their pyjamas.

“Get fully dressed. A day in your pyjamas is likely to be a lot less productive as your brain will keep trying to put you in non-work mode,” says a 65-page handbook recently developed by the department.

The guide is aimed at teachers aged 60 and older and those with underlying medical conditions, who have applied for a concession from provincial education departments to work from home.

The document advises teachers to go through the same morning routine as if preparing for school because “you're not on holiday”. They are told to set a specific time to be at work. 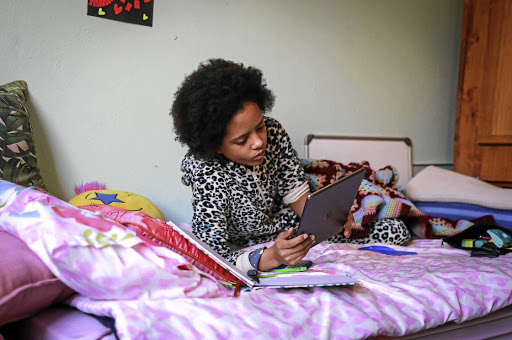 Though a uniform code of conduct hasn't been enforced for pupils, many South African schools have told them to dress "appropriately" for live-streamed lessons.
Image: Sebabatso Mosamo

Other suggestions include setting times to take meal breaks, switching off their electronic devices and stepping away from their work stations at designated times, informing their families about their work routine, and avoiding distracting personal media tools.

Though a uniform code of conduct hasn't been enforced for pupils, many schools have told them to dress “appropriately” for live-streamed lessons.

Independent Schools Association of SA executive director Lebogang Montjane said pupils should dress as if they were attending school and not a slumber party.

“I think we can agree that  if you haven't changed out of clothes used for sleeping in the privacy of your bedroom at night, you are probably not in work or learning mode.

“Some schools might want uniforms to be worn as they could argue that dressing the part can help children mentally to be in a learning mindset. Other schools might be happy with neat and clean civvies,” Montjane said.

Parents of pupils attending Curro schools have been told not to buy uniforms midyear, but their children are not allowed to wear pyjamas to classes.

“Students are expected to be dressed for school. They cannot be in their pyjamas, but can wear casual clothes. We do not have uniforms. We didn’t want parents to have to buy uniforms midyear, especially in these trying times,” said Curro online business manager Jay Paul.

Many Wykeham Collegiate pupils choose to wear uniforms or school tracksuits to create a sense of routine.

“We wouldn’t necessarily know if they are wearing pyjamas as girls usually turn off their cameras during class so that they do not waste data. While we can always see who is with us online, the focus is on learning, being present and participating,” said principal Sue Tasker. 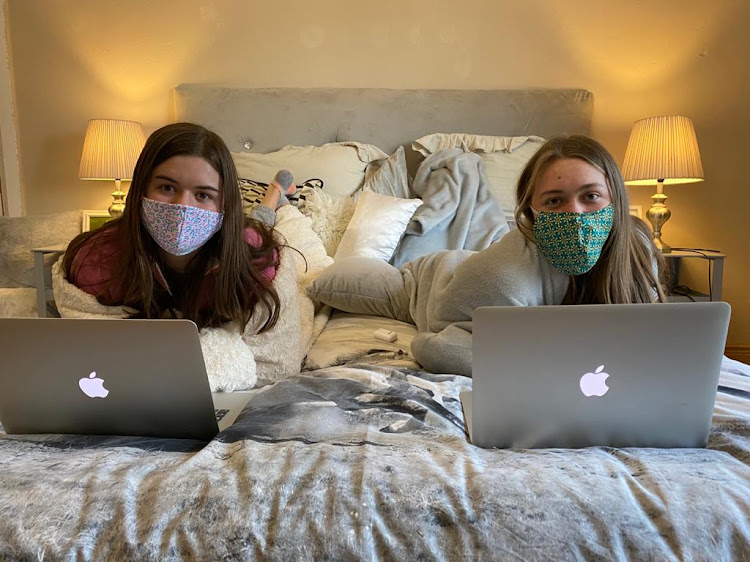 Wykeham Collegiate grade 9 pupil Tamzin Gace, left, enjoyed the perks of online schooling, like wearing pyjamas and having the occasional lie down, while grade 10 pupil Madison Shaw said online classes in bed with her pyjamas on made learning less stressful.
Image: Supplied

Wykeham Collegiate grade 9 pupil Tamzin Gace enjoyed the perks, like “wearing pyjamas and having the occasional lie down”, while grade 10 pupil Madison Shaw, who has been staying with the Gace family while her parents are in Hong Kong due to the lockdown, said pyjamas in bed made online learning more comfortable on “stressful days”.

When Sacred Heart College started online lessons, Bridget van Oerle set up a space in her office for her grade 8 daughter, Kia.

“When she was doing virtual classes she was using my office and desk as a schoolroom. We discussed this and felt it was best to set up a space so there was a routine and a place to work, and it felt like going to school,” said Van Oerle.

Spokesperson Elijah Mhlanga said while the education department did not have online classes as an official learning platform, schools should determine pupils' dress etiquette.

Prof Wayne Hugo, of the University of KwaZulu-Natal School of Education, said the longer pupils attended online classes in pyjamas from their beds, the greater the risk of children not engaging.

“The pull of going back to sleep, watching videos and doing other things while you're in your pyjamas on your bed  becomes more stronger, and that increases the longer you do it.

“Some children can very successfully be in their pyjamas in bed for three, four or five days, or even a week, but after a week you will see a fall-off in their participation rate because they don’t have a separate space. They don’t have markers to shift them from one space to another, from one style of energy to another and from one way of thinking to another way.”

He said uniforms were one technique to put markers in place.

“It is not that every school should insist on a uniform. They have to make sure there is some kind of shift where the learner moves from the entertainment or private space into a more public learning space.”

Gauteng education MEC Panyaza Lesufi said on Friday he was pleased with the turnout of matric pupils in the first week back after a break in ...
News
1 year ago

Pupils with comorbidities must produce proof when applying for exemption

Pupils with comorbidities must produce a medical certificate when they apply for partial or full exemption from compulsory school attendance.
News
1 year ago