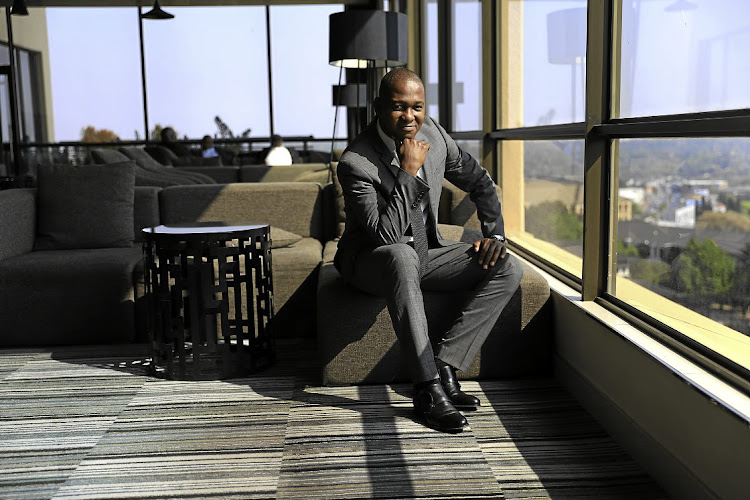 Harvey Buthelezi, executive chair of HSB Mercantile, says he submitted an R87m quote to supply the Gauteng health department with PPE, and in return received a commitment letter for 10 times that amount.
Image: Alon Skuy

The Gauteng business owner linked to an R800m personal protective equipment (PPE) tender says he was shocked when he saw the figures in the health department's commitment letter because his quotation had been for one-tenth of the "staggering" amount.

Harvey Buthelezi, executive chair of HSB Mercantile, said that in the end he received orders worth just over R6m from the department, and he is still owed more than R2m. He said errors by health department officials resulted in his R87m quotation ballooning to R873m - before the contract was chopped to R4.6m.

Buthelezi was thrust into the spotlight when a list of companies that benefited from the Gauteng health department's PPE procurement programme circulated on social media.

His company and more than 100 others are the subject of an investigation by the Special Investigating Unit (SIU) following allegations of collusion, overpricing and violations of supply chain management processes.

Buthelezi has already been interviewed by the SIU. The corruption-busting unit wanted to know how he got to know about the opportunity to supply PPE and if his company met state procurement requirements.

SIU spokesperson Kaizer Kganyago said the unit was investigating all contracts in Gauteng, including those awarded to Buthelezi. "We are checking if they were awarded properly. We are investigating if there was collusion and overpricing."

Kganyago added that just because the SIU was investigating someone did not necessarily mean there had been wrongdoing.

Widespread outrage greeted revelations in recent weeks that businesses with links to ANC leaders have benefited from PPE contracts.

HSB Mercantile was identified as one of those with political links because Buthelezi is a former chief of staff in the health MEC's office. He is also a former chair of the ANC Sandton branch.

This week he rejected suggestions that his political connections influenced the decision to give him contracts.

He said he stopped being active in ANC politics after he resigned from the Gauteng provincial administration in 2012.

Buthelezi said he had sought to conduct business with the health department after he resigned from his job as group operating officer of Southern Palace in July.

Gauteng health MEC Bandile Masuku is mounting a fightback against adverse findings made against him by the ANC's provincial integrity commission ...
Politics
1 year ago

He said he had secured suppliers in China through contacts he made on a business trip last year.

"I was not an invited guest in the process," Buthelezi said. "I was doing my bid to promote my products that I sourced. No-one called me to say, 'Comrade, do you have anything to do with PPE?' or say, 'Maybe there is an opportunity here.'

"I had my own pressures of having left a corporate job."

After making inquiries he was directed to the health department's war room in Midrand, where he met the then CFO Kabelo Lehloenya.

"I knew her. She was part of the youth league that I formed in Sandton 10 years ago," Buthelezi said. Lehloenya did not seem to recognise him, however.

He submitted his PPE samples and details of his company, which he said was on the government's central supplier database.

"I then got a call to say 'bring more samples'. They seemed to be interested in spray bottles - unbeknown to me ... all the spray bottles had run out."

The number is staggering and nice for business. But I couldn't get my head around the figures ...

Buthelezi said he sent a quotation for R87m.

"Then I get a commitment letter [of] R873m. So I look at this, already I'm not impressed.

"The number is staggering and nice for business. But I couldn't get my head around the figures because we were discussing a few hundred thousand to a million units.

"Then I phoned [Lehloenya] to say, 'What's happened to my quotation because this letter says you have accepted my quotation but the quantity I see here is not talking to it. You ordered 200,000 masks, instead of two million.

"The quantity of masks was reduced and [the quantities of] disinfectants and sanitisers were inflated."

In internal correspondence, Lehloenya blamed the health department's chief director of supply chain management, Thandy Pino - who has been suspended - for the error.

The department issued a new commitment letter to Buthelezi to purchase PPE worth R4.6m.

"The explanation was, 'We are moving to a weekly commitment system. We're not going to order in bulk from you, Mr Buthelezi.'"

He said this was awkward for him because he had already made commitments to suppliers based on an R87m quotation.

"I was sued by a supplier... What cost me is the [department's] commitment to buy masks from me and they didn't."

Buthelezi said he was paid R4m. But then he received another contract to supply bottles of detergent worth R1.4m.

He said he has not been paid since May.

"All this happens when the CFO is about to leave [the department] ... It left me wondering, will they ever pay me in full. Right now they owe me R2.2m.

He said he suspects that the R800m commitment was sent to him by mistake, and was really intended for someone "in a more favourable position".

"I began to suspect that maybe it went astray. Then I began to fear, when I was reading about the other companies, that maybe there is a clone... that someone is delivering on the purchase order," he said.

Lehloenya declined to comment and referred questions to the Gauteng health department.

Cederberg municipal staff were told 'not to cooperate' during raid: SIU

Cederberg mayor Sylvia Qunta says the municipality is considering taking the Special Investigating Unit to court over a search and seizure operation ...
News
1 year ago