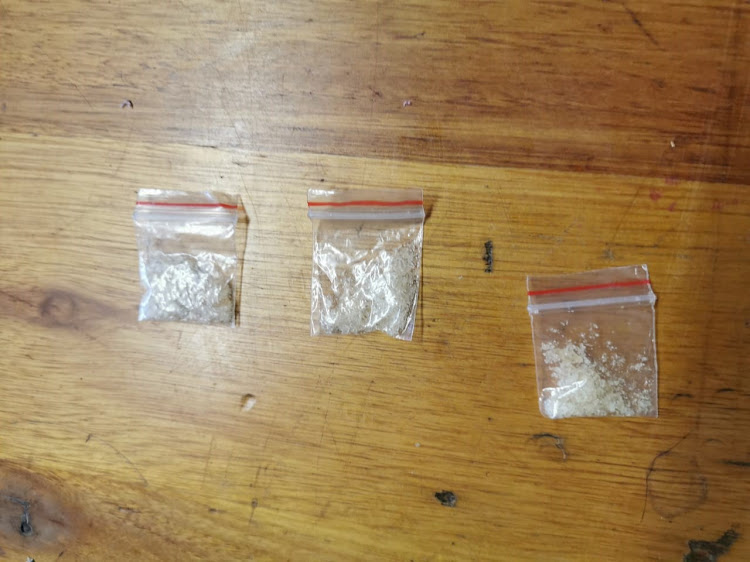 Drug cartels operating out of Afghanistan are believed to be targeting SA as the new destination and global distribution hub for their multibillion-dollar crystal meth operations.

The drug is commonly known in SA as tik.

With security forces cracking down on European drug supply routes, and opium growers and production facilities in Afghanistan, crime syndicates have developed a booming new meth distribution line, according to the latest report from the Global Initiative Against Transnational Organised Crime (GI-TOC).

It says syndicates are shipping hundreds of kilograms of meth to SA via strife-torn Mozambique.

Afghanistan’s meth boom is driven by the country’s ephedra shrub, which contains a naturally occurring form of ephedrine, the organisation said. Opium is used to produce heroin, and meth is made with ephedrine.

Jason Eligh, senior illicit drug market expert at GI-TOC, said the research was part of a larger global drug project, which in part was looking at how Southern and East Africa are affected by different narcotics.

“Through our research we identified the emergence of the apparent new meth supply route into Africa and SA from Afghanistan. Confirmation of this new route is strengthened by the seizures at Komatipoort and Pemba, in Mozambique. 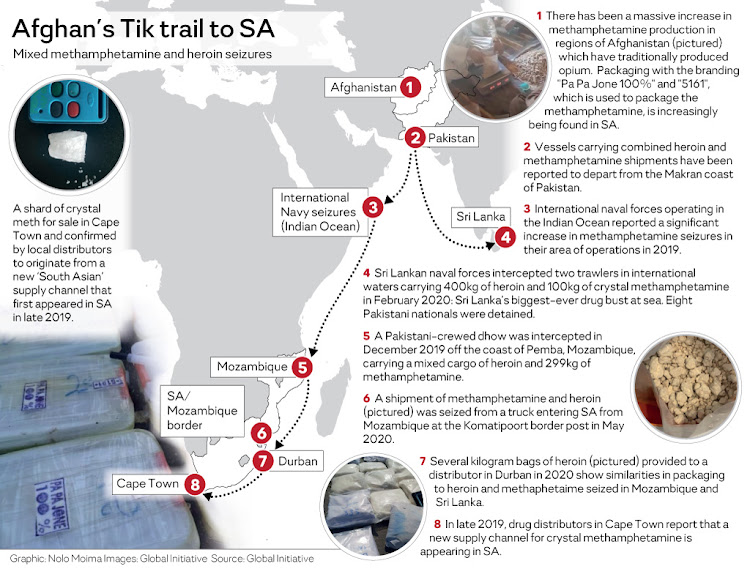 In May two South Africans were arrested at the Komatipoort border post, allegedly trying to smuggle 100kg of crystal meth, worth R10m, into SA. The suspects, who are in custody awaiting trial, were charged with drug trafficking.

The report says a security crackdown in Iran, a global meth producer, led Iranian producers to share their knowledge with their Afghan counterparts.

“An abundance of artisanal meth labs have emerged in Afghanistan, with ephedra a game-changer for meth production.”

Emerging evidence, according to the authors, shows that meth is shipped to SA along established heroin smuggling routes.

“International naval forces have reported a significant increase in meth seizures in the Indian Ocean. In December 2019, a dhow was intercepted off the coast of Pemba, Mozambique, carrying a cargo of heroin and 299kg of meth.

“In May 2020, a truck was intercepted by the South African police attempting to cross the Mozambican/SA Komatipoort border carrying a large shipment of heroin and meth.

“In July 2020, GI-TOC research teams took images of a heroin shipment just delivered in Durban. Similar images were taken of a joint heroin and meth shipment that arrived in Cape Town. Wrapped in thick plastic bags of 1kg … the packaging was stamped with distinctive markings ‘Pa Pa Jone 100%’ and ‘5161’.

“These markings are consistent across each of the seizures … suggesting a common origin.”

The report says that in August, Cape Town meth distributors told researchers of the emergence of “Pakistan Meth” over the past 10 months.

“The purity of Pakistani meth is seen as quite high and as good as Mexican-produced meth … and better than Chinese-produced meth manufactured around Johannesburg.”

Nadine Harker, a specialist scientist within South African Medical Research Council’s alcohol, tobacco & other drug research unit, which collects data on people seeking treatment at narcotics rehab centres, said there is an increase in people seeking help for meth use.

“While meth is particularly prevalent in the Western Cape, there are big increases in Eastern Cape meth treatment admissions, with rises in Gauteng, Northern Cape, Limpopo, the Free State and KwaZulu-Natal,” she said. Annually an estimated 19,000 people seek treatment for a variety of narcotics use at drug rehab centres in SA.

“Between July and December 2019, 21.3% of admissions at treatment centres were for meth, which is a lot.”

South African Network of People Who Use Drugs chair Shaun Shelly said it appears the new meth is mainly being sold in Durban and Cape Town.

He said meth has been in SA since the 1990s. “Until recently one couldn’t get meth easily, especially in Durban, Johannesburg and Pretoria. Suddenly it’s everywhere.

“In the past year there has been a rapid surge in meth use in Pretoria, especially among heroin users. There has been an increase in heroin users, with heroin dealers increasingly supplying meth, which traditionally they didn’t do,” said Shelly.

“There are reports of different meth suppliers emerging, with new routes to meet demand, which has been affected by decreasing local production.”

Drug researcher Monique Marks, head of the Durban University of Technology’s Urban Futures Centre, said in eThekwini meth is mainly used by those in affluent areas.

Commenting on recent drug use research in eThekwini, she said in Morningside there are an estimated 12,370 heroin users, 8,651 cocaine users and 6,260 meth users.

“In KwaMashu, estimated heroin users are 15,150, cocaine users 11,080, and meth users 47. For some reason in Durban’s working-class areas meth is hardly used, which is different to Cape Town. There’s something interesting going on around class and use of meth in Durban.”

Two people were arrested after they were caught attempting to smuggle R10m worth of crystal meth and heroin into SA from Mozambique, Mpumalanga ...
News
1 year ago

A man was arrested in possession of drugs worth more than R1m at a house in Robertsham on Thursday, the Johannesburg metro police department said
News
2 years ago

A Durban man is expected to appear in court on Monday after police confiscated more than 200 pieces of rock cocaine and other drugs with an estimated ...
News
1 year ago