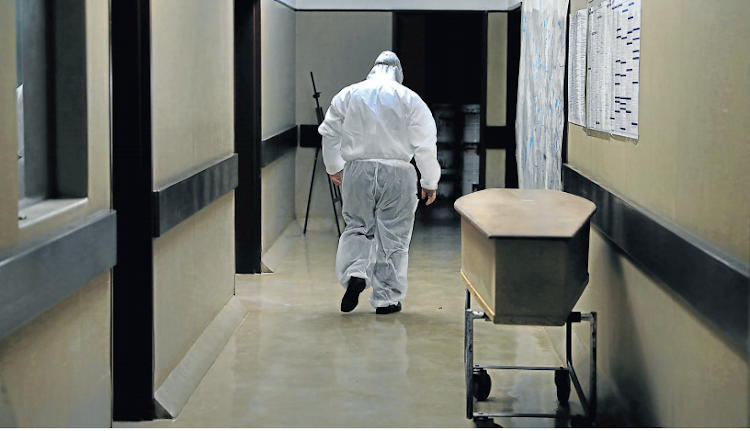 Clinical psychologist says it is important for those who lost their loved ones to Covid-19 to express their feelings. File photo.
Image: Alon Skuy

The joy of Christmas was missing this year for Amanda Ngubethole, who spent the holiday grieving for three relatives who died of Covid-19.

The 37-year-old’s year of heartache began in June, when her diabetic grandmother, Nomakhosazana Soyizwapi, from Mthatha, died three days after being admitted to hospital with flu symptoms and testing positive for the coronavirus.

Then Soyizwapi’s daughter-in-law, Lungiswa Soyizwapi, who was taking care of her, was also admitted to hospital.

“She died a couple of days after my grandmother. It was sad for us because we could not even attend the funeral. Only a few of our uncles attended,” said Ngubethole of her sister-in-law’s death.

Tragedy struck again in July with the death of Ngubethole’s aunt, Nwabisa Soyizwapi, who had arrived home from work in Port Elizabeth complaining she had a cold.

“She was so scared of Covid-19 because a lot of people she knew were losing their lives. My aunt died just days after she tested positive. She had been struggling to breathe.”

Songezo Jobela, of Port Elizabeth, had two cousins die of Covid-19. He also got Covid but survived.

“The first person to die was my cousin Don. He had called me to ask what remedies I had used. A couple of days later, I received a call that he had collapsed and died,” Jobela said.

Don, 33, an aircraft engineer, was fit and healthy. “He had never been sick,” said Jobela.

His other cousin, Zakhile, 51, died three weeks ago after testing positive for Covid-19. “He decided to go for a test because his girlfriend had tested positive,” said Jobela. “I was checking on him every day offering emotional support because it is important when you have the virus.”

“I got a call from his doctor telling me that his lungs were failing. I was in shock. I’m still in pain. Losing a loved one is never easy and the most painful thing is that you can’t bury your loved one with dignity. By the time you get to the gravesite, he has already been buried.”

The A to Z of Covid-19: What we’ll always remember from the year of the pandemic

From asymptomatic to Zoom, here's the A to Z of the Covid-19 pandemic, which has infected more than 75 million people and claimed more than 1.7 ...
News
1 year ago

Tougher restrictions could be imposed nationwide when the National Coronavirus Command Council meets this week to discuss a Covid-19 resurgence being ...
News
1 year ago

Covid ravaged a convent in Port Shepstone, KwaZulu-Natal, where nine nuns died. The latest death was on Monday.

The sisters, members of the Daughters of St Francis of Assisi congregation, died within days of one another after a celebration on December 8. Six more are in hospital and eight are under quarantine.

“It’s quite difficult, as you can imagine, having this big number within a short period of time,” said Sister Dominica Mkhize, the leader of the congregation. “It’s quite traumatic to everyone.”

None of the surviving sisters have had time to grieve the deaths of their colleagues. “Since the occurrence is still happening, we don’t have time to deal with the deaths. We need to deal with what is happening at the moment,” she said.

Sociologist Alex Asakitikpi said dealing with death was never easy. “There are various institutions we can tap into so we can go through that process of grieving. The primary [institution] of course is the family,” he said.

People can also be consoled through their beliefs. “It could be the Koran, the Bible, traditional practices, that tell them about the aftermath of death. Psychological counselling is another coping mechanism.”

Clinical psychologist Clarette Lubbe said it was important for those who were grieving to express their feelings.

“Sometimes it helps to write a letter to your loved one who has died to express what you feel when you did not have the opportunity to do so in person.“Anything that helps to take the feelings off one’s heart and head in a physical way is useful and healthy."

'When this Covid-19 wave is over, there is going to be a third and fourth wave'

Glenda Gray, president of the Medical Research Council, urged South Africans this week to curb the spread of the new variant of Covid-19, warning ...
News
1 year ago

“Can you hear me chair,” an MP would shout before another chipped in.
News
1 year ago

Covid-19 pandemic: it was a time for heroes across the land

A year that to all intents and purposes began only on March 27 when SA went into hard lockdown brought lashings of misery and hardship, most keenly ...
News
1 year ago