Symptoms drag on for many Covid-19 patients, study finds 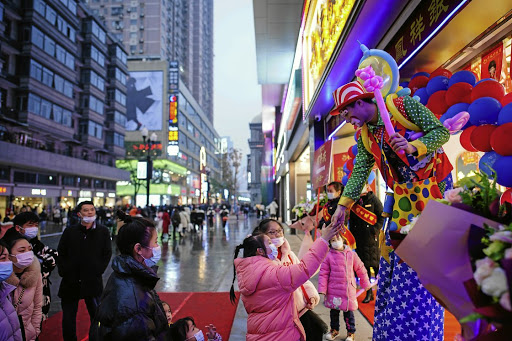 About a year after the outbreak of the Covid-19 pandemic in Wuhan, a clown interacts with shoppers in the Chinese city. Picture: Reuters

More than three-quarters of Covid-19 patients hospitalised in Wuhan, China, between January and May had at least one persistent symptom six months later, according to a report that portends the enduring pain of the pandemic.

Almost two-thirds of those followed still experienced fatigue or muscle weakness half a year after their acute illness, while 26% had sleep difficulties and 23% had anxiety or depression, according to the peer-reviewed study of 1,733 patients in The Lancet medical journal.

The research from China underscores the long-term effects of Covid-19 for individuals and societies as infections surge across the world despite budding vaccination campaigns.

It also highlights the growing need for sustained care for large swathes of populations and research into the new disease's lingering effects, according to one of the authors, Bin Cao, a lung specialist at the National Clinical Research Centre for Respiratory Diseases in China.

The study also adds credence to worries about the possibility of reinfection among those who have recovered.

The researchers analysed levels of neutralising antibodies - immune proteins that the body normally makes in response to viruses that can ward off repeat illness. In a group of 94 patients, levels of these antibodies fell by an average of 53% during the six-month study period after their sickness peaked.

In addition to causing pneumonia, Covid-19 is known to affect the kidneys, heart, blood vessels and other tissues. Lab tests showed that 13% of patients whose kidneys appeared healthy during their hospital stays had reduced function in the follow-up examination.

As a record number of new infections overwhelmed some hospitals this week, SA's long-awaited vaccine programme went into overdrive, with the first ...
News
5 months ago

For many hard-hit patients, lung function was still compromised half a year later. More than half of people who required ventilation had a reduced flow of oxygen from the lungs to the bloodstream, and about a quarter of others had that problem.

Patients with severe disease also performed worse in a six-minute walking test, with about a quarter of them unable to reach the lower distance limit of the normal range, the study said.

The study followed patients discharged from Jin Yin-tan Hospital in Wuhan, where the virus emerged. Their median age was 57.

Meanwhile, a study published in the New England Journal of Medicine suggests the new coronavirus does not need to directly invade brain tissue to damage it.

Researchers examined the brains of 19 patients who died from Covid-19, focusing on tissues from regions thought to be highly susceptible to the virus: the olfactory bulb, which controls the sense of smell, and the brainstem, which controls breathing and heart rate.

In 14 patients, one or both of these regions contained damaged blood vessels - some clotted, and some leaking.

The areas with leakage were surrounded by inflammation from the body's immune response, they found. But the researchers saw no signs of the virus itself.

"We were completely surprised," said co-author Dr Avindra Nath of the National Institute of Neurological Disorders and Stroke.

The damage his team saw is usually associated with strokes and neuroinflammatory diseases, he said.

"In the future, we plan to study how Covid-19 harms the brain's blood vessels and whether that produces some of the short- and long-term symptoms we see in patients."

Interpol warns of fake vaccines targeting the desperate in SA

Another study has found that pandemic stress may be causing people to lose their hair. Rates of a hair-shedding condition called telogen effluvium (TE) had surged more than 400% in a racially diverse neighbourhood in New York City, researchers report in the Journal of the American Academy of Dermatology.

"It is unclear if the increase in cases of TE is more closely related to the physiological toll of infection or extreme emotional stress," said co-author Dr Shoshana Marmon of Coney Island Hospital.

Also, three research groups argued this week in three papers in Annals of Internal Medicine that a single dose of one of the currently available Covid-19 vaccines, even if less effective than two doses, may have greater population benefit.

In large trials, two-dose regimens of the vaccine from Pfizer and partner BioNTech SE and Moderna's shot both demonstrated nearly 95% efficacy in preventing illness.

"In a public health emergency, a powerful argument exists for doing something with less-than-perfect results if it can help more persons quickly," said Thomas Bollyky of the Council on Foreign Relations.

"However, whether alternative approaches with current vaccines would accomplish this goal is far from clear."

The US Food and Drug Administration said this week that the idea of changing the authorised dosing or schedules of Covid-19 vaccines is premature and not supported by available data.