Vaccine cavalry comes to the rescue against Covid-19 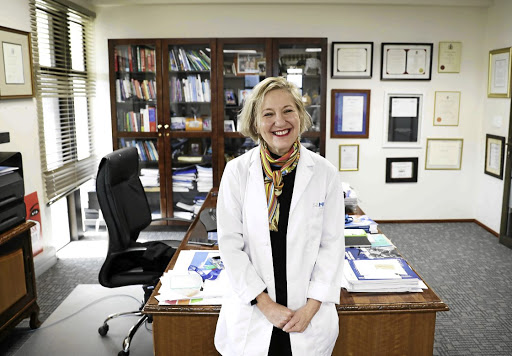 Professor Glenda Gray says the new vaccines will be sent to designated hospitals and then into more rural and remote places.
Image: Supplied

SA's on-off Covid-19 vaccination programme has been rescued by a batch of 80,000 vaccines that Johnson & Johnson was keeping in reserve in Europe.

Quick footwork by officials and scientists in SA, and approval on Friday by the SA Health Products Regulatory Authority (SAHPRA), will bring the drugs here. They will be administered from J&J trial sites to health workers. Inoculations are due to start this week.

The measure is a stopgap until the first batch of Pfizer vaccines is rolled out in April, at the earliest.

This comes after the AstraZeneca vaccine was found to be relatively ineffective against the 501Y.V2 variant in SA.

The 501.V2 variant has been a curveball for vaccine developers across the globe, with all asking the same question: will our vaccine be the one to ...
News
1 year ago

SA will be the first country to administer the Johnson & Johnson vaccine. The pharma giant released its third-phase trial results only last month.

Not only did the company step in with 80,000 single-dose vaccines, it has also undertaken to provide a new batch of vaccine doses to SA every 14 days.

SA is to receive 9-million vaccines from J&J. It has also secured 20-million doses from Pfizer, which are due to begin arriving in SA by the end of next month.

It has also secured 12-million through the Covax initiative, which is supported by the World Health Organisation.

Negotiations with several other pharmaceutical companies are under way.

The co-principal investigator of the Johnson & Johnson Covid-19 vaccine, professor Glenda Gray, said SAHPRA on Friday approved early access of the single-dose J&J vaccine to its research sites. These will go to health workers to support hospitals in the first phase of the vaccine programme in SA.

The research staff will work with 18 hospitals to offer the first 80,000 doses to health workers in 14 days. This is part of the approved implementation programme that will continue to roll out 80,000 doses every 14 days, she said.

"We will start first with designated hospitals and move more and more into rural and remote places," she said.

"This is monumental. Now we can get the permit and activate the shipment," she said. "Nobody has given us a free pass. They have been very diligent."

Gray, the president of the SA Medical Research Council, commended the regulator's rigour. "They are independent and doing what they should be. No matter how much pressure there is, they are following the correct process and doing their job," she said.

The J&J trial has 31 research sites and a presence in every province. These will be used to give health workers their shots.

"They know the products and the systems are in place," said Gray. She mentioned sites in Mthatha, Port Elizabeth, Ladysmith, Middelburg and the Northern Cape where the vaccine would be provided.

Gray said the transport of vaccines will be closely guarded with additional security from the military. A truck moving vaccines in Brazil was hijacked, underlining the need to keep vaccine shipments safe.

Like the AstraZeneca jab, J&J's vaccine was on trial in SA. The trial produced lower efficacy rates than others J&J conducted around the world - 57% protection against moderate to severe infections, compared with 66% in Latin America and 72% in the US. But it appears to be able to handle the 501Y.V2 variant, which first emerged in SA, better than AstraZeneca's offering.

The deputy director-general of health, Anban Pillay, said J&J had stepped in to
help SA.

"After the data relating to AstraZeneca vaccines became available, J&J appreciated our dilemma and decided to mobilise stock for health-care workers on an urgent basis. This was not planned or known to us prior to the AZ study results becoming available."

He said the stock was made up of excess doses that had been produced originally for the J&J trial.

"The doses are expected to come through every two weeks. The quantities may vary in each shipment depending on various factors on the J&J side.

"We are still on track to start [roll-out] this week. The vaccination is planned to be rolled out on the same day in each province."

Pillay said the vaccination of all health workers was expected to take two to three months and that other vaccines, when they become available, will probably also be used to vaccinate health workers.

Pillay said he hoped that South African pharmaceutical company Aspen will begin filling and packaging the J&J vaccine at its Port Elizabeth plant from April.

The arrival of 80,000 Johnson & Johnson vaccine doses next week will signal the start of SA’s inoculation rollout. The chair of parliament’s standing ...
Opinion & Analysis
1 year ago

SA is grappling with what to do with the 1.5-million AstraZeneca doses that were bought from India.

Pillay said SA had paid $5.35 per vaccine. This price included transport and insurance, bringing the cost of the first batch of 1-million vaccine doses to R77m.

SA had also undertaken to receive a further 500,000 doses later this month.

"We are not going to receive the second batch of doses in February ... [but] some time later for study purposes. A study with a much larger sample size is planned to understand the clinical benefit of the vaccine in the context of the 501Y.V2 variant."

The ministerial advisory committee has been tasked with coming up with recommendations on what to do with the Astra-Zeneca vaccines.

Committee leader, professor Salim Abdool Karim, told the Sunday Times: "We do not yet know whether that diminished efficacy also applies to severe disease and hospitalisations. This was because of the profile of the participants enrolled in the trial, who were young and healthy.

We are not going to receive the second batch of doses in February ... [but] some time later for study purposes. A study with a much larger sample size is planned to understand the clinical benefit of the vaccine in the context of the 501Y.V2 variant

"I would not want to recommend to our government that we roll out a vaccine when we have that level of uncertainty, but I suggest a two-step process. This is what has been recommended to the government and they must still decide."

In this plan, 100,000 individuals, mainly in their 40s and 50s, would be vaccinated. They would be voluntarily enrolled.

Karim said enrolling those above 65 would be moot because the US is already doing such a trial and the results should come out soon.

"We want to decrease the likelihood of hospitalisations, and the way to do that is to take individuals above 40 or 50.

"This will help us answer the real question at hand," he said.

Meanwhile, the spokesperson for the Democratic Nursing Organisation, Sibongiseni Delihlazo, said as long as the J&J vaccine has passed SA's mandatory regulatory processes "then we do not have a problem with our members being inoculated".

He said it is in the interest of SA that an efficient and safe vaccine be found to protect health workers.

LISTEN | The vaccine and the silver lining

SA-born engineer's vintage fridge could be key in vaccine rollout

As countries scramble to find freezers capable of storing vaccines, one ultra-old fridge developed by a South Africa-born engineer could become a ...
News
1 year ago

Science to the fore in the Covid-19 vaccine programme

Student and youth health and wellness agency supports the science-oriented approach health minister Zweli Mkhize has applied to the vaccination ...
Ideas
1 year ago

SA aims to immunise up to 500,000 health workers in J&J study, scientist says