For me, getting vaccinated is choosing life: nurse who got first Covid-19 jab 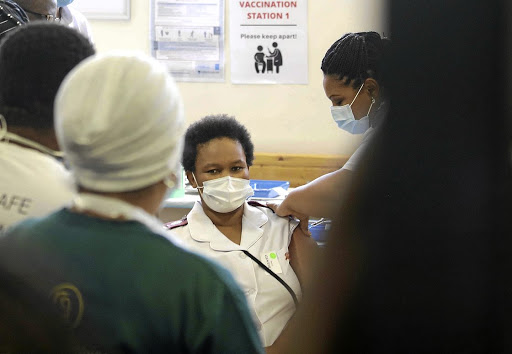 A nurse at the Khayelitsha District Hospital in Cape Town gets her Covid vaccine jab this week. President Cyril Ramphosa got his there too.
Image: Esa Alexander

After seeing patients die of Covid in Khayelitsha District Hospital, Zoliswa Gidi-Dyosi wondered if she would be next.

"Some ... were my age and that made me even more scared," said the 42-year-old sister in the hospital's labour ward.

But her 70-year-old mother's near death from Covid-19 brought the pandemic even closer to home. Gidi-Dyosi spent Christmas caring for her mother in King William's Town in the Eastern Cape.

"At some point she was so ill that we wanted to rush her to hospital, but she insisted we treat at her home as she feared she would die if she was admitted," said Gidi-Dyosi, a mother of three from Delft near Cape Town.

Ramaphosa described the jab process as "just a prick on my flesh" and said the first vaccinations were a “real milestone” for SA.
Politics
1 year ago

On Wednesday, Gidi-Dyosi was the first South African vaccinated against Covid-19. She jumped at a call for volunteers.

"I didn't even think twice," she said.

"I'm a breadwinner in my home. I'm financially supporting my mother and I've got three children. My eldest son is doing his third year at university, and I've got two more that are still at primary school.

"I can't afford get sick or die. For me, getting vaccinated is choosing life."

Soon after being injected alongside President Cyril Ramaphosa and health minister Zweli Mkhize, the midwife had to cut the interviews short to deliver a baby.

Doctor who did Covid ward rounds with tears in her eyes relieved as KZN receives almost 11,000 vaccines

A doctor at Prince Mshiyeni Memorial Hospital in Umlazi, south of Durban, has told of how staff who had manned Covid-19 wards with tears in their ...
News
1 year ago

"I've been getting a lot of phone calls from people, including my own mother, who saw me on TV. She was very excited and said I was very brave to take the vaccine.

"I hope that people will look at my life and see that vaccines don't kill people; they save lives."

"I want people to see me and know that vaccines save lives and there is nothing wrong with the Covid-19 vaccine. I also want to dispel all those conspiracies thrown about," the Covid survivor said.

Mangena said she felt safe to do her job.

"Every morning I would say a prayer when I walked into the ward and ask God that I don't get the virus. When I knocked off, I would pray that I don't take it back to my family," she said.

But receiving the vaccine did not mean easing up on safety precautions. The clinical head of the Covid-19 ward at Chris Hani Baragwanath, Dr Kavita Makan, said she felt lucky and privileged to receive the vaccine.

"Every day I would also ask myself if I perhaps touched anything and didn't wash my hands properly," she said.

At the Steve Biko Academic Hospital in Pretoria, anaesthetist Dr Onicca Khobo-Mpe received the vaccine. Both her parents died in the first wave. Khobo-Mpe did not even take time off to mourn them.

By the end of next weekend, 1,300 frontline workers at the hospital will have been inoculated.

"I've been a health worker since 1994 and I know I must remain positive and take care of my own health," Khobo-Mpe said.

She said she was nervous about getting the vaccine but knew it gave her a chance to keep helping others.

"As a scientist you question everything. But if there was no substantial evidence that the vaccine could [help] then there wouldn't be a push to get it," she said.

Professor Marc Mendelson, head of infectious diseases and HIV medicine at Groote Schuur Hospital in Cape Town, had his J&J jab on Thursday at the hospital and had minor side effects about 10 hours later.

"I experienced chills, which lasted about one hour, and then had a mild headache overnight, relieved by paracetamol.

"I actually found it a very productive experience, a feeling of one's immune system taking up the challenge to protect you against Covid-19 in the future."

'All hands are on deck': Moving heaven and earth for fast vaccine rollout

When health-care workers lined up for the first Johnson & Johnson Covid vaccinations this week, it was an emotional moment for them - and for the ...
News
1 year ago

'It's not a setback at all': SA to press on with Pfizer Covid-19 vaccine

SA is pushing ahead with the planned rollout of the Pfizer vaccine, with experts not overly concerned about the results of a new study showing that ...
News
1 year ago