You need 28 days to get a full response - and there's still an epidemic, warns professor Glenda Gray 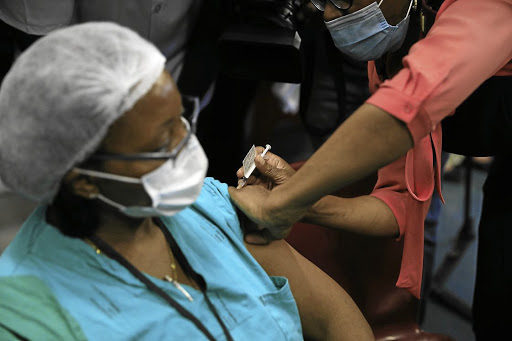 One of the health-care workers at the Steve Biko Academic Hospital in Pretoria was among the first to get inoculated with the Johnson & Johnson vaccine in February.
Image: Alon Skuy

Some of the 145,000 health workers vaccinated against Covid-19 have become infected with the virus during the time it takes for the vaccine to become fully effective.

"You need 28 days to get a full response and during that time you are susceptible to SARS-CoV-2 and there is still an epidemic," said professor Glenda Gray, co-principal investigator of the Johnson & Johnson implementation study. J&J is providing the vaccine shots.

Gray urged people who had been vaccinated to keep taking precautions against the virus, which is currently responsible for 26,040 active infections nationwide, the lowest total since the 100th day of the local outbreak, June 12 2020.

Gray, who is also president of the Medical Research Council, said there had been "consternation" when some of the vaccinated health staff developed allergic reactions and needed medical attention.

She appealed to health workers to disclose allergies or pre-existing conditions before getting their jabs so that staff could be well prepared to manage them. One individual with severe pre-existing allergies had to be hospitalised overnight before recovering.

The health department has denied reports that the sale of a million doses of the AstraZeneca vaccine has hit a technical snag, insisting the sale is ...
News
1 year ago

Gray was speaking as 40,000 more doses of the J&J vaccine arrived in SA yesterday.

She said that to avoid stock-outs, the J&J vaccine doses were arriving more frequently in the country. "We have an agreement with the company to supply 500,000 doses. Although we were going to bring in 80,000 doses every 14 days, we are now bringing in smaller quantities, but more frequently.

"A batch arrived [yesterday]. Another will arrive on Wednesday and another next Saturday. As they are brought into South Africa we dispense them."

One of the four vaccines being assessed by the South African Health Products Regulatory Authority is at an advanced stage of the approval process, said the regulator's spokesperson, Yuven Gounden.

The authority has received applications for the use of four vaccines - J&J, Pfizer, China's Sinovac and Russia's Sputnik - and in some instances "there are a number of manufacturers per application", said Gounden.

inoculations given in SA by Friday

The regulator received the Sinovac application on Wednesday and amendments to one of the other applications had been filed, which would prolong the review process. Sinovac and the remaining vaccine, which Gounden did not name, are in the early stages of being assessed.

Though local clinical trials, such as the one Gray is co-leading, are not a requirement, Gounden said, "it is recommended that data is collected against the local epidemiology context".

The regulator approved the AstraZeneca vaccine in January but the million doses SA bought were shelved when it was found to have low efficacy against the variant circulating most widely in the second wave.

This week, inoculation with the AstraZeneca vaccine was halted in at least 10 countries over safety concerns related to blood clots.

The World Health Organisation said an expert group was assessing reports of clots in some people who received doses of the inoculation from two batches. Unless a clear link is established, there is no reason to stop injections, the group said, echoing the comments of Europe's drug regulator.

SA's AstraZeneca doses, which the AU has agreed to buy, remain in the country amid negotiations about who will be liable in the event of harm or loss from the use of the shots.

Dr John Nkengasong, director of the Africa Centres for Disease Control and Prevention, said: "These vaccines came from the Serum Institute of India and they had signed an agreement with the government of South Africa and it was very clear on who owns the indemnification policy for that.

"Now that we are going to get the vaccines from South Africa, you have to have an entity that owns that indemnification. So that is the only remaining step that has really held that process back."

Health minister Zweli Mkhize said the vaccines would be sold for the price SA paid. "Our legal team are finalising the agreement between us and the AU before they are released to various countries," he said.

Gray's co-principal investigator in the J&J study, professor Linda-Gail Bekker, said despite the expiry date of April 30, the AstraZeneca doses were likely to be fine if they were used beyond that date.

Bekker said her experience with the J&J vaccinations had left her feeling positive about the next phase of vaccinations, though there was still no clarity on when deliveries of J&J and Pfizer vaccines would arrive.

"We are trying to work out from government when the Pfizer is coming. They say by the end of March, but the vaccine global supply is tricky. Everyone is scrambling for doses," she said.

Professor Barry Schoub, chair of the ministerial advisory committee on vaccines, said: "We are not involved in the procurement of vaccines but the assurance we have been given is that more than enough doses have been ordered."

He said he had been told that 11-million doses of the J&J vaccine had been ordered, and 5-million and 7-million Pfizer doses for delivery by the middle of the year.

The milestone of 100,000 health-care workers vaccinated was reached on Friday and a new shipment of Johnson & Johnson (J&J) Covid-19 vaccines is ...
News
1 year ago