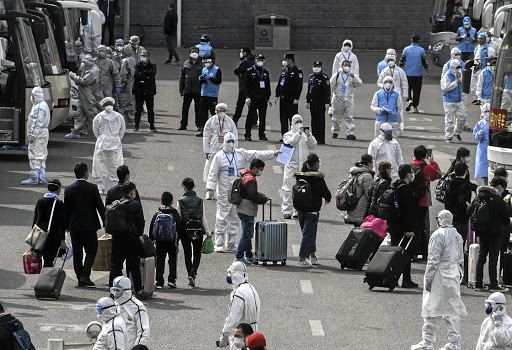 The scene in April last year in Beijing when travellers arriving from Wuhan, epicentre of the Covid outbreak, were sent to quarantine facilities. It has yet to be conclusively determined how the virus began spreading in humans, and the US is seeking to establish whether it could have escaped from a Wuhan laboratory.
Image: Kevin Frayer/Getty Images

The World Health Organisation's top emergency expert says the search for the origin of the coronavirus is being "poisoned by politics", days after US President Joe Biden ordered aides to find answers.

Since the virus outbreak that emerged in the central Chinese city of Wuhan in December 2019, scientists have been trying to solve the puzzle of how the virus originated.

"We would like for everyone out there to separate, if they can, the politics of this issue from the science. This whole process is being poisoned by politics," Mike Ryan told reporters.

A WHO-led team that spent four weeks in and around Wuhan with Chinese researchers said in a report in March the virus had probably been transmitted from bats to humans through another animal.

It said that "introduction through a laboratory incident was considered to be an extremely unlikely pathway".

But many politicians and a number of scientists are not satisfied.

Biden on Wednesday ordered aides to find answers to the virus's origin, saying US intelligence agencies were pursuing rival theories, potentially including the possibility of a laboratory accident in China.

The third wave of Covid-19 has taken hold and could be significantly worse than the second, experts told the Sunday Times.
News
6 months ago

The US on Thursday called on the WHO to carry out a second probe.

"Every country and every entity is free to pursue their own particular theories of origin; it's a free world," Ryan said.

"WHO is a member-state organisation and we seek to work with all of our member states to seek answers collectively."

The initial WHO study was "insufficient and inconclusive", the US mission to the UN in Geneva said in a statement on Thursday.

"It is critical that China provides independent experts full access to complete, original data and samples relevant to understanding the source of the virus and the early stages of the pandemic," the US statement said.

China, through remarks by a representative at its embassy in the US, said it supported "a comprehensive study of all early cases of Covid-19 found worldwide and a thorough investigation into some secretive bases and biological laboratories all over the world".

Simon Manley, Britain's ambassador to the UN in Geneva, said in a separate statement: "Phase 1 of the WHO-convened Covid-19 origins study was always meant to be the beginning of the process, not the end. We call for a timely, transparent, evidence-based, and expert-led phase 2 study, including in the People's Republic of China, as recommended by the experts' report."

We would like for everyone out there to separate, if they can, the politics of this issue from the science

Meanwhile, new infections in India fell to their lowest level in more than six weeks and weekly cases in the US are down by more than half since the end of April. But outbreaks in Taiwan and Thailand showed little sign of slowing, while Malaysia hit an infection record for the fifth successive day.

The WHO is finalising its assessment of China's Sinovac shot, while the European Medicines Agency (EMA) has cleared Pfizer and BioNTech SE's vaccine, branded as Comirnaty, for children aged 12 and above, paving the way for a broader rollout in the bloc after similar clearances in the US and Canada.

Germany on Thursday laid out plans to offer shots to 12-year-olds from June 7, pending the EMA's verdict. Italy has also said it is preparing to extend its campaign to children aged over 12.

Inoculating children and young people is considered a critical step towards reaching "herd immunity" and taming the pandemic, and Japan on Friday joined the countries with a go-ahead for Comirnaty in 12-year-olds.

Youngsters have been much less likely to suffer severe symptoms, with many experiencing no symptoms, allowing them to unwittingly transmit Covid to others.

However, giving vaccines to younger people in affluent countries while many parts of the world await doses for older and more vulnerable people has raised concerns.

Yesterday, Iran said it would tap $125m (R1.72bn) of its funds in Iraq that it can't access due to sanctions to buy vaccines through the WHO's Covax alliance.

According to the state-run Islamic Republic News Agency, energy minister Reza Ardakanian said the payment will be made through a Swiss bank and the transaction is expected to be completed by the end of the week.

On Saturday, the country reported 7,107 new infections over the past 24 hours, the lowest number since February.

In Vietnam, authorities have detected a new variant that is a combination of the Indian and UK Covid variants and spreads quickly by air, the health minister said yesterday.

After containing the virus for most of last year, Vietnam is grappling with a rise in infections since late last month.

In Spain, the transport ministry said yesterday it will allow cruise ships to dock in its ports from June 7. It is hoped the move will help salvage the country's battered tourism sector in time for the summer season.

Spain's maritime authorities approved the reopening because of falling Covid incidence rates and an increase in vaccinations, according to an order in Spain's state gazette published yesterday.

Spain banned cruise ships from docking in its ports in June last year as the pandemic ripped through Europe. A number of high-profile spreader events were linked to cruise liners around the world.

"Shipping companies will have to comply with measures established by the health ministry ... to guarantee total security, both for cruise passengers and for the cities where they land," the transport ministry tweeted on Saturday.

It added that before the pandemic, Spain was the second-most popular destination for international cruises in Europe.

Spain, which was also the second-most visited country in the world before the health crisis, was one of Europe's worst-hit nations, recording more than 79,000 coronavirus deaths and 3.7-million cases.

Anti-vaxxers use Seychelles case to take jabs at vaccines, but is it vindication?

Surge in Covid cases in world’s most immunised nation has thrown a spanner in the works for scientists. What’s really going on?
World
6 months ago

SA has the highest increase in new cases on average, at 14%, among the most populous countries on the continent
Africa
6 months ago