'It's a happy time': Sharp eyes and big smiles in Covid-19 vaccine lines 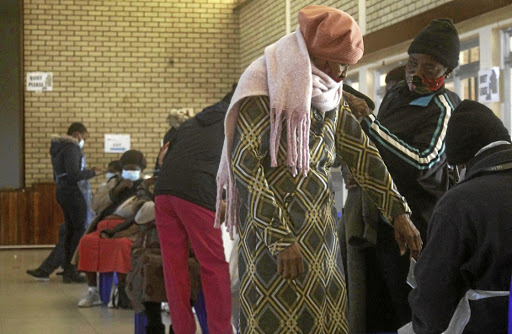 It took just one granny suspected of wanting to jump the queue at Chris Hani Baragwanath Hospital on Wednesday to get the rest shouting and waving walking sticks.

And just like that, the mood went from amicable to adversarial.

The angry pensioners were calmed by a nurse who reminded the elderly that they were fit and strong and this particular woman was a frail 80-year-old. But the mumbles and clicking of tongues went on until the woman had shuffled out of view.

By noon, 450 people over the age of 60 had received their first dose of the Pfizer vaccine.

Dorothy Shebe, 66, took her seat in the hospital's recreational hall, looking ready to do battle with the long needle about to enter her left upper arm.

Delighted and beaming as she was shown to the waiting area, where patients need to wait for 15 minutes to ensure they have no adverse side-effects, Shebe said how grateful she was to finally get the vaccine.

Dr Shane Murphy, who was overseeing the site that day, said there were 13 stations in the hall and the elderly entered in batches of 13 after going through a process of checks.

He said about 700 men and women would be processed by the end of the day and that the site was relatively quiet - the weather was a factor.

Murphy said nurses use their discretion when allowing a patient to the front of the queue.

A partial audit of the billions of rands the government spent fighting Covid-19 paint a picture of looting on an industrial scale.
News
2 weeks ago

"The over-60s are a unique bunch, they like to come early and get their day started. We don't have to give the queue numbers [to see who's next in line] because the elderly will always know who was where in the queue. They are organised."

The hall is nearly 2km from the front gate, so for some the day had already been a tiring one, especially if they were dropped by taxi at the street entrance. 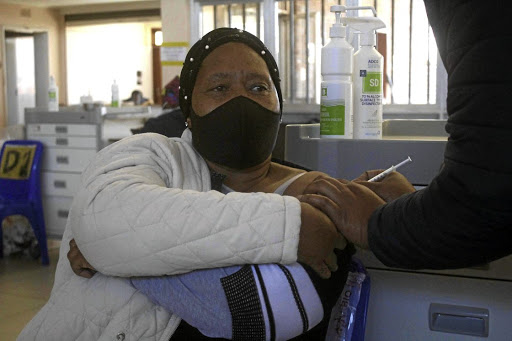 Dikeledi Shomang, 65, gets her jab at Bara in Soweto.
Image: Kabelo Mokoena

Aaron Sibiya, 90, was led from the hall by his son Dave. Sibiya was slow to walk but happy about being vaccinated. "It didn't hurt at all," he beamed. It had taken about 40 minutes, according to Dave, who said his mother's vaccine had taken only 20 minutes in Florida, western Johannesburg.

"Both parents had totally different experiences. I'm not sure why they were sent to different places," Dave said.

At the private dispensary at Chilli Lane Clicks in Sunninghill, northern Johannesburg, three walk-in patients came hoping to get their vaccines.

A dejected couple who didn't want to give their names because they had tried to sneak in, said Clicks was no longer accepting walk-ins.

"We got our SMS but we haven't been told when or where to go," the woman said. Her husband said sarcastically: "I'll have to try that 'help' line again."

In the Western Cape, wealthier seniors ditched their medical aids and joined their less-fortunate compatriots at the Lentegeur Psychiatric Hospital in Mitchells Plain to get their vaccine shots.

There they discovered a "slick operation" run by gentle and helpful staff.

Some people had brought books in anticipation of long queues, but there was barely time to read. More than a dozen booths in the main hall administered jabs quickly and, said 90-year-old Dora Mamaga, painlessly.

"I was afraid, but the injection wasn't sore. It's a happy time, it's very nice to have received the injection," said the wheelchair-bound Mamaga.

The main hall bustled with conversation. Excited folk, some of them having lived reclusive lives since the start of the pandemic, struck up conversations in little groups.

In Durban, there were no queues at Addington Hospital nurses' residence where a few senior citizens got their jab on Friday morning. 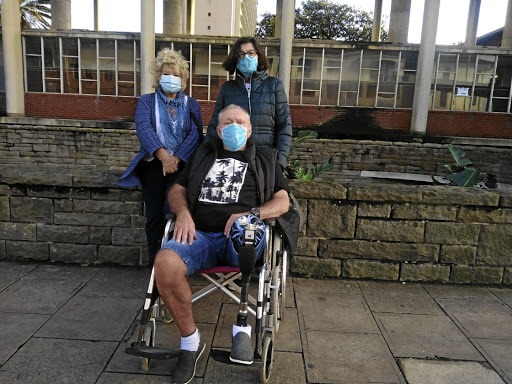 It took FJ Mathews of Sydenham, Durban, all of 10 minutes to be vaccinated at Addington Hospital nurses' residence on Friday.
Image: Mluleki Mdletshe

One of them was 67-year-old FJ Mathews, who had travelled from Sydenham.

"It was a fantastic experience. I was absolutely pleased with the young ladies in the hospital. They were exceptional with an old cripple like myself. I took a late bus coming here but there are no queues whatsoever and it is a quick in-and-out. I was there for 10 minutes, tops," he said.

Joy Reynolds, 70, who drove herself to get vaccinated, said she was impressed with the efficiency and friendliness of the staff. "I say everyone must do it. Get vaccinated. Do it for your family and your loved ones," she said.

Paramedic strike & hitting the million mark: 5 things you need to know about the vaccine rollout this week

Here is a wrap on this week's vaccine rollout.
News
2 weeks ago

Vaccinations to start for teachers from next week

Teachers, cleaners and other support staff at the more than 25,000 public schools in SA will be vaccinated against Covid-19 from Wednesday.
News
2 weeks ago

Here's why some people are sceptical about Covid-19 vaccines

'People used to say you die if you get vaccinated,' says Emily Mohapi, 99, one of the first people from Protea South to receive a vaccine.
News
2 weeks ago