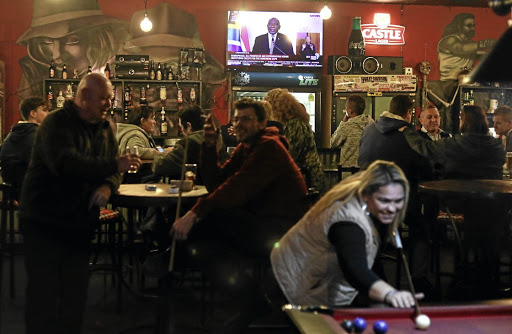 According to Dr Richard Matzopoulos, an epidemiologist at the South African Medical Research Council, alcohol has played a role in fuelling the third wave.
Image: Alaister Russel

The accelerating third wave of Covid-19 isn't something that's happening to us, it's something we're creating, say experts.

The idea of "invincible teens", indoor gatherings, drinking and laxity in protocols pushed daily infections past 10,000 this week for the first time in five months.

Professor Shabir Madhi, an expert in vaccinology at Wits University, said 10 people in a poorly ventilated room with precautions not in place constituted a mass gathering and a possible super-spreader.

She’s only a month old, but Aurora Wileman has fought Covid along with the rest of her family — and survived.
News
11 months ago

"Mass indoor gatherings lead to super-spreader events that are directly or indirectly associated with 80% of infections," he said.

He said enforcing restrictions could slow the spread of the virus.

"This needs to be coupled with ensuring adequate ventilation of indoor spaces and enforcing the wearing of masks indoors."

"I am aware that large-scale partying is happening in places like Stellenbosch and Pretoria with varsity students who feel invincible," she said.

Also, "as soon as they enter a venue", masks are taken off.

She said "many parents of teens have said lockdown with a curfew has helped ... because the answer is simply 'no'".

However, "socialising within legal hours is a very different thing as teens are wired to socialise and broaden their network".

"Sometimes teens and youth, with their underdeveloped prefrontal cortex, aren't thinking, which is why we do need to remind them and have conversations with them to sharpen their critical thinking," said Bush.

Historian professor Hlonipha Mokoena, of the Wits Institute for Social and Economic Research, said our ability to self-regulate has dwindled in the pandemic.

"Facts about the virus and the pandemic are becoming less relevant and we are all becoming self-centred and focused on the costs that we are having to bear. The notion of self-regulation is therefore becoming more of a wish than a reality," she said.

Even people who "initially responded had now "exhausted themselves".

"Ordinary people may be quickly losing their ability to deal with information and rationalise it," said Mokoena.

According to Dr Richard Matzopoulos, an epidemiologist at the South African Medical Research Council, alcohol has played a role in fuelling the third wave.

"Drinking, like eating, is something that you can't do with a mask on," he said.

"Added to this, on-licence establishments can be densely populated, and not wearing a mask in a crowded place exponentially increases the risk of airborne transmission."

On-licence establishments can be densely populated, and not wearing a mask in a crowded place exponentially increases the risk of airborne transmission

It is for this reason that some of the well-known super-spreader events have involved lots of drinking".

Professor Wolfgang Preiser, a virology expert at the University of Stellenbosch, said President Cyril Ramaphosa's announcement this week of the level 3 lockdown was what "many colleagues had wished for: a moderate tightening of measures to dampen the third wave".

He added: "My observations during the past months reminded me of October last year when 'living felt easy'."

When case numbers were low, it made people feel "safe to meet others without much ado about masks, social distancing, number of people".

However, he said Covid-19 "spreads easily and often does not cause severe symptoms", so it spreads widely before a problem is recognised. By then, exponential growth has kicked in.

Being born again, thanks to the Covid-19 vaccine

Far from the madding crowd, a group of gogos from Worcester in the Western Cape leave their local clinic singing a verse from the song Mandizalwe ...
Opinion & Analysis
11 months ago

The Presidential Youth Employment Initiative could be revived to boost Covid-19 vaccination registrations.
News
11 months ago

With the third wave in full swing, doctors fear being overwhelmed

Gauteng doctors, swamped by skyrocketing Covid-19 infections, are bracing for the worst as SA's third wave sees them battling staff, bed and even ...
News
11 months ago