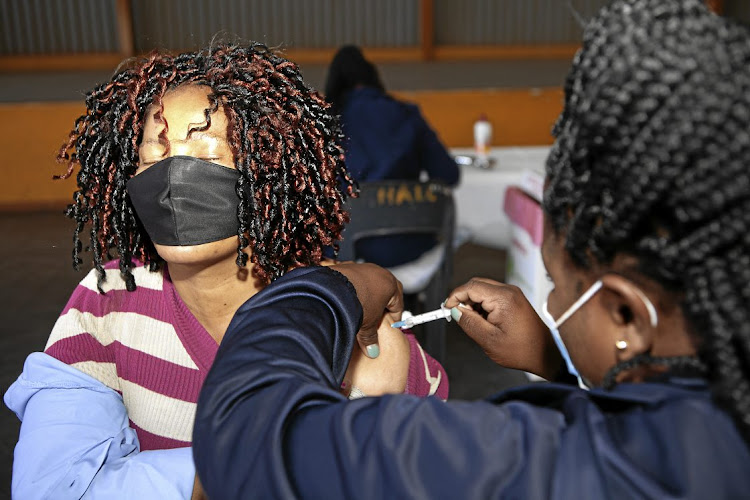 A woman receives the Covid-19 vaccine at a Meadowlands vaccination site in Soweto on Wednesday after the health department opened vaccine registration (vaccine.enroll.health.gov.za/) to people aged 35 years and above.
Image: Papi Morake/Gallo Images

SA is swimming hard and fast to reach Covid-19 herd immunity but our efforts are being haunted by our late dive off the starting block.

This seems to be the consensus in the health and science communities as the third wave flattens but a fourth appears likely in November.

With the milestone of 6-million jabs achieved on Thursday, acting health minister Mmamoloko Kubayi said she was confident of reaching President Cyril Ramaphosa’s target of 300,000 a day in the coming week.

Martin Kingston of Business for SA said capacity will soon be in place to administer 420,000 doses daily.

But for professor Francois Venter, Ezintsha director at Wits health sciences, these figures overlook the nuances of who is being vaccinated and the overall efficacy this can have during a pandemic.

“There is a lot to be celebrated in our vaccine rollout. But we need to ask how many of those being vaccinated are over 60. That is a much more important marker,” he said. “Vaccinating one 60-year-old is more important than vaccinating two 35-year-olds.

“Yes, it’s great if 35-million have received a dose by the end of this year, but if they’re mainly below 50 years of age, that isn’t great.”

He also thought it may take “pulling a rabbit out of a hat” to hit 35-million. And even that might be too late given the possibility of a fourth wave as soon as November.

Professor Glenda Gray, head of the South African Medical Research Council, said the vaccine rollout is “gaining momentum and the new strategies, such as mobile units and targeting people in Sassa queues”, had “increased the reach” of the rollout.

The University of Cape Town’s professor Jeremy Seekings, head of the Centre for Social Science Research, and economics professor Nicoli Nattrass, said the rollout of Pfizer vaccines had accelerated.

“But we are worried about the apparently slow usage of Johnson & Johnson vaccines, which have an expiry date. The government says that it hasn’t even used half of its stock of J&J after more than a month.

“The one-shot J&J vaccine does not need as much refrigeration as Pfizer and should have been used in rural areas. We don’t understand why it has been used for special occupational groups (ie public sector workers).” They said that “at the pace of the rollout last week, the government will achieve its goal of vaccinating the adult population not in early 2022 (as it originally promised) but in early 2023”.

The accelerated rollout comes amid clear signs of waning in the third wave. Gray said: “We are hopeful that the third wave has peaked, and hopefully the events of last week will not lead to super-spreading events.”

Venter said he was “not convinced [restrictions] do a lot other than damage the economy and other health-care services”, and that a far better effort would be a “strong education campaign to show how [the virus] spreads indoors”.

Three months ago, SA’s vaccination drive looked headed for disaster. After a slow start, the rollout has reached about 230,00 people a day, Business ...
News
5 months ago

The department of basic education is forcing teachers who refuse to be vaccinated against Covid on medical grounds to produce a detailed medical ...
News
5 months ago

Vaccination teams are on their way into communities, says health boss

Roving teams of Covid-19 vaccinators will soon be operating at community halls around the country.
News
6 months ago