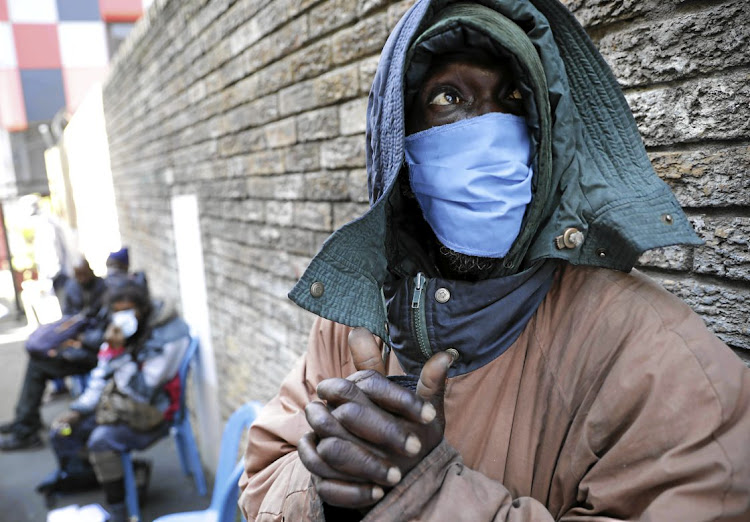 Tommy Tito waits at the resting space after receiving his vaccine at the Hope Exchange, where homeless people in and around Cape Town’s CBD may ask to be vaccinated against Covid-19 whether or not they can produce proof of ID.
Image: Esa Alexander

The Western Cape has started vaccinating the homeless, even those without identity documents, in a pioneering move targeting 40,000 people.

National health spokesperson Popo Maja said the department is still thinking about how to register and vaccinate undocumented individuals. But on Friday, more than 200 homeless people queued for jabs at the Hope Exchange in Cape Town’s city centre.

“Some don’t have IDs, but a lot of people know their ID numbers so we enter them into the system,” said Dr Saadiq Kariem, chief of operations at the Western Cape health department.

“If people don’t have an ID we will still vaccinate them as we don’t want that to be a barrier to receiving a vaccine. That is why it’s important for us to work with the city and the NGOs that work with homeless people as they often know who the homeless people are.

“We put as much detail as possible on the form and we do a manual paper-based system in case we don’t have all the details. So far it’s going very well … the turnout has been quite good. And if this works well we will expand it to other areas as well.”

The programme is targeting about 4,000 homeless people in Cape Town and 40,000 throughout the province using single-dose J&J jabs.

“They will also be issued with vaccination cards, same as everyone else,” said health department spokesperson Mark van der Heever, who said details will be “back-captured” on the electronic vaccination data system once an “undocumented” category has been added. 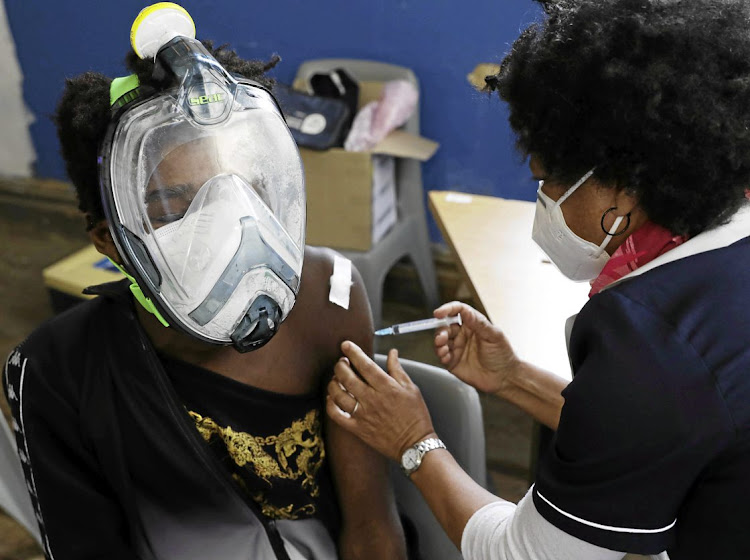 A doubly masked Capetonian receives the Covid-19 vaccine at the Hope Exchange. While the national health department thinks about how to register undocumented people for the vaccine, the Western Cape is rolling out jabs.
Image: Esa Alexander

The National Homeless Network is working with the Western Cape on the rollout. National secretary Mary Gillett-de Klerk said it has been frustrating to get the national department to discuss the vaccination of undocumented citizens.

“Many have lost their ID books on the streets, some get burnt or destroyed when they are moved from the places they stay,” she said. “There is also some misconstrued idea by the department of health that the homeless sell their IDs.”

In Johannesburg, four of the five homeless people who spoke to the Sunday Times said they would take the vaccination if given the opportunity, though two had no identity document.

“People were getting R350 [social grant payouts from government] which I could not get because I have no ID. If there was something I could fight for and queue for, it would be [the grant], not the vaccine,” said Lunga, who lives near Park Station and did not want to give his surname.

Mzwakhe Sibeko, who lives in Melville, is not opposed to getting the vaccine but has little hope he will. “As far as I know, it gets given to people who have money,” he said.

In Cape Town on Friday, homeless woman Uyanda Solly said she wants to get vaccinated for the sake of her two children.

“I want to see them grow, and if I can avoid getting sick from Covid-19 why not? Given our circumstance, where we don’t have a guaranteed access to masks and sanitiser, taking the vaccine seems like a pretty good idea.”

Her friend Anita said she felt relieved after taking the vaccine. “I feel like a weight has been taken off my shoulder. I consider myself lucky not to have contracted Covid-19 so when this vaccination programme for the homeless was announced I decided to face my fears and go for it.

“I’m still very young and have life ahead of me that I need to live. That is why I got vaccinated,” said the 28-year-old.

The Rev Annie Kirke, a Hope Exchange director, said initial scepticism had been overcome by giving homeless people information about the jab.

“Some people were concerned about ramifications of the vaccines, particularly those with chronic conditions and those who used substances. But we have people who were saying ‘no way’ last week, who are here today and are feeling so peaceful to have the vaccine,” she said.

The J&J Covid-19 vaccine protects people against dying if they get infected with the Delta variant.
News
9 months ago

People fraudulently trying to get a vaccine card to enable them to travel without getting the vaccine will face the 'full might of the law'.
News
9 months ago

Can I get the Covid-19 vaccine if I’m breastfeeding?

Here's what the experts have to say
Lifestyle
9 months ago