Doctors and nurses in Cape Town report that they have been treating relatively younger patients in the latest wave compared to the second wave.
Image: Emile Bosch

Patients younger than 59 have been admitted to hospital in greater numbers during the Delta-driven third wave, according to clinicians on the frontline of the war against Covid-19.

The 50-59 age group has been at increased risk from Covid-19 during the third wave compared to the second wave, with a higher proportion of hospitalisations and deaths in the Western Cape, an analysis of admissions and deaths has found.

And University of Cape Town professor Mary-Ann Davies, director of the Centre for Infectious Disease Epidemiology and Research, said on Friday that a "slightly greater number of Covid-19 cases among children [under 20 years old]" had been reported in this wave, with the proportion of children rising from about 6% of cases to 8%-9%.

Among the few children admitted to hospital with Covid-19, the number and proportion has increased from about 3% to 4% compared to previous waves, she said. However, "the absolute numbers of children admitted remain very small".

Different reasons - unrelated to the Delta variant - could be driving this slight upward trend. The increased availability of testing to more young people who previously did not get tested and schools staying open during this wave (besides the June/July holiday) could have contributed to this, Davies said.

CLICK HERE TO VIEW THE HIGH-RES VERSION OF THIS GRAPHIC 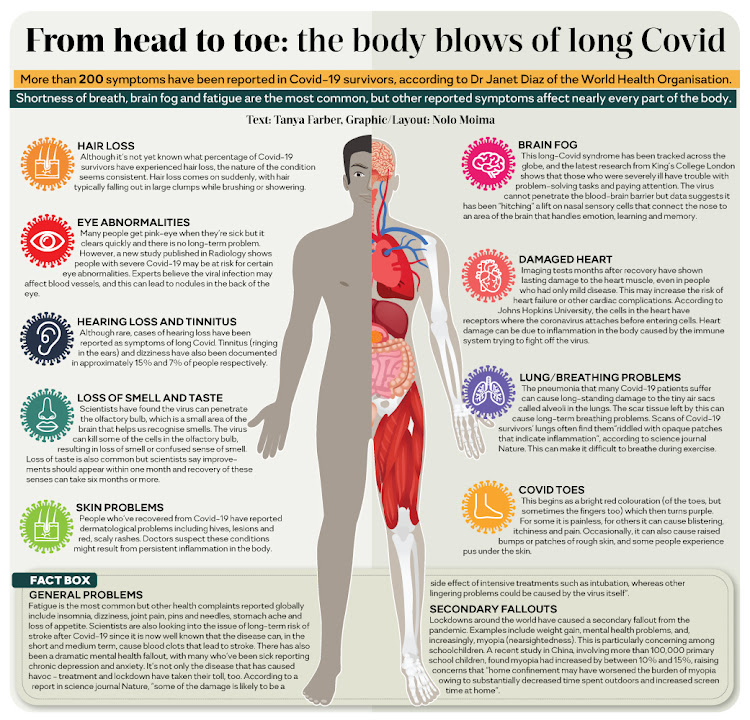 She said the increase in routine testing of all admitted patients to hospital (including for trauma and pre-operation procedures) could be why they had detected a few more children with Covid-19 in hospitals.

Younger age groups may be "slightly more likely" to have the Delta variant than other age groups tested in the public health sector, according to "very preliminary results which need to be confirmed", she said.

Meanwhile, countries such as India, Brazil, Australia and the US are reporting patterns of younger people getting sick and dying, for a range of reasons - not least the vaccination of older people protecting them from hospitalisation - as well as soaring infections with the Delta variant pushing up total case numbers.

Doctors and nurses in Cape Town report that they have been treating relatively younger patients in the latest wave compared to the second wave.

One of them is Dr Helen van der Plas, an infectious diseases specialist at the Life Vincent Pallotti Hospital in Cape Town, who has seen young patients with severe symptoms. "However, that is likely a function of vaccination of older persons, and the loss of life or past infections in the older individuals during the previous wave. Of course there are other factors too," she said.

The behaviour of younger people is overall more social, and thus riskier, than that of older groups. Outbreaks during the summer's second wave were linked, for example, to social gatherings among school-leavers.

Research in other countries has flagged the risk that the Delta variant could cause severe disease and hospitalisation.

A new study in India suggests the Delta variant is more virulent and younger patients are at risk of dying. In northern India, deaths rose by nearly half during the latest deadly wave which was driven by the Delta variant, first identified in India. "Mortality increased by almost 40% in wave two, particularly in the younger patients of age less than 45 years," according to the pre-print of the study released on medRxIV.

A study published in The Lancet on June 26 found that the risk of hospitalisation from disease caused by the Delta variant in Scotland nearly doubled compared to the Alpha variant. The results also showed that the patients admitted were mostly younger. But, by then, more than 90% of the older people in the study had been protected by at least a single vaccine dose.

In the US, most older people are vaccinated so, proportionately, more younger and unvaccinated people are in the firing line for hospitalisation, as reports by the Centers for Disease Control and Prevention show.

At this stage there are more questions than answers about the Covid risk to people below 50 but at least two points are clear, say infectious diseases specialists: Covid can hit adults of any age, and vaccinations reduce the risk of death by more than 90%.

There is no prospect of the Covid-19 lockdown being eased in the near future, health minister Joe Phaahla said on Friday.
News
3 months ago

Only you have the capacity to turn the Covid tide, Western Capers told

As trauma cases rocket and hesitancy mars vaccine rollout, the metro’s critical-care beds are at 129% occupancy
News
3 months ago